promised land where they could live in peace

This morning in the hotel breakfast room, there was a guy who works on scripts for AMC and the History Channel--their war shows--talking with his friend about script policies. Among other things, he said they had to downplay battles that we lost and to avoid referring to any time that we retreated. Scripts needed "high five" moments. I imagine the Western genre as something a lot like this, promoting the Western myth as fact, though cloaked in fiction. Today, for example, we were driving up the 70 to Roswell, New Mexico and we passed the location where John Tunstall was murdered (a moment we've seen in The Left Handed Gun already this month and that we will see a couple more times; the Billy the Kid story is one that bears repeating. I was surprised at how the location was situated in a nice green valley, surrounded by hills. I seem to recall the location being depicted more like a desert in film. Even when we emerged out of the valley, there were low hills and grassland. This area isn't the usual desert, But, there's a reason that we like to show the desert--monument valley perhaps. There's scattered grass, sure, maybe a shrub here and there but it's desolate. It's a place you cannot live without taming it. That's part of the Western myth, part of the American myth; we came and we not only conquered the natives, we conquered the land. We took a wilderness and transformed it into civilization. Each town in the Western, each town in the West, is an outpost against the natural order.

A Man Called Horse yesterday and Little Big Man today have a sense--however much it may run counter to the mainstream Western films before--that the Natives were people, not savages, not animals. The ripoff of A Man Called Horse, Dances with Wolves takes the same angle as this film, putting the US Cavalry as villains. Given the timing of these films, this could easily be taken as commentary on Vietnam, anti-establishment... and anti-myth. 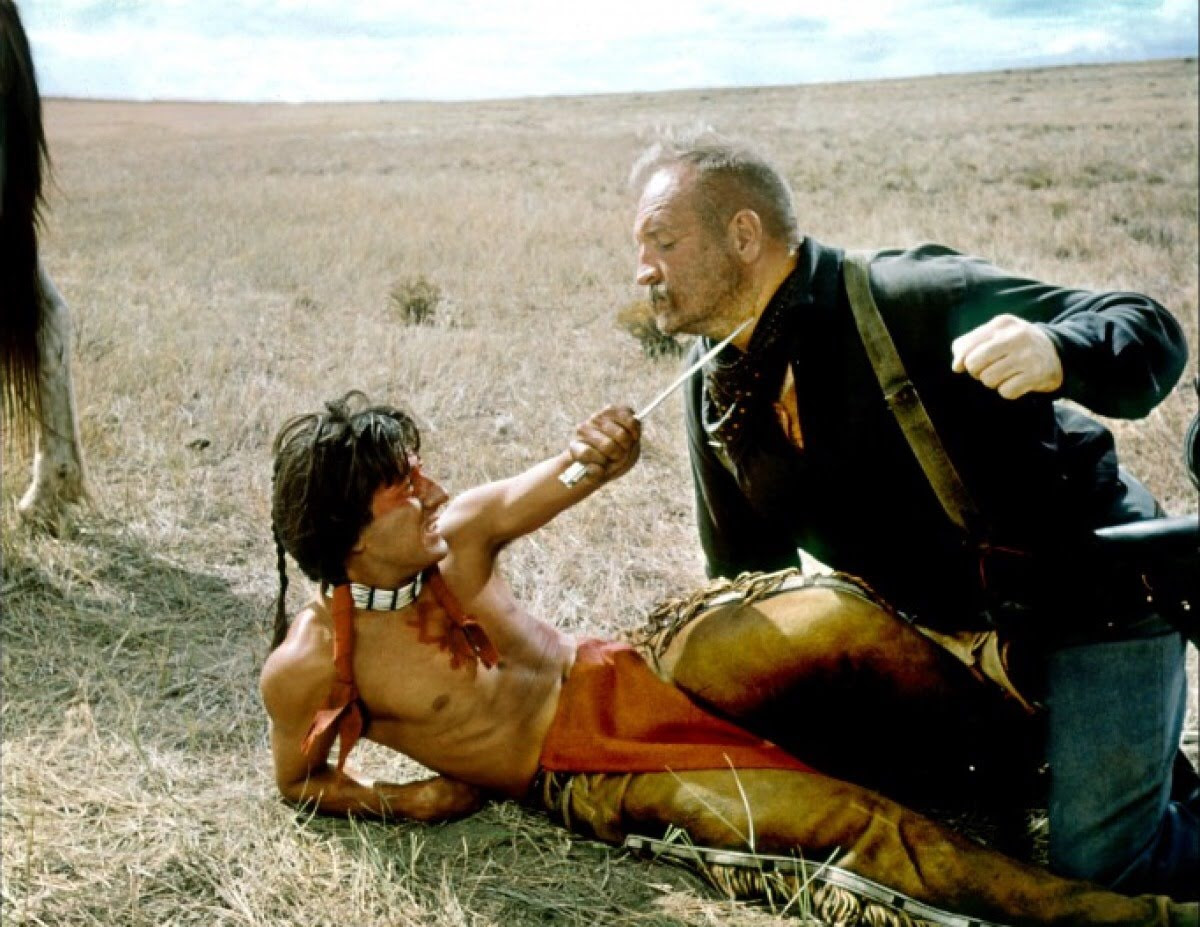 The notion that the natives might actually be human, and might have actual personalities and legitimate urges and motivations, should not be anathema to the Western myth but it is. If they are human, our taking of there land becomes a villainous act. If they are savages, the nameless horde of Stagecoach, the near-unfathomable danger of The Searchers, the unseen element of True Grit, then we can take their land, we can kill them, we can do whatever we want to do.

That is the Western myth. Savages occupied a savage land, we tamed or destroyed both. And, the land became ours, the promised land of our glorious nation.

Little Big Man offers a satirical take on the Western, with Jack Crabb (Dustin Hoffman) undertaking several occupations, like the various men who inhabited the West.