A thought occurred to me while watching Bloodsport last night.


(It's on again right now, but it has only just started, with the random bits of violence against objects and that one white guy fighting that one black guy and shots of people setting up the competition space.) 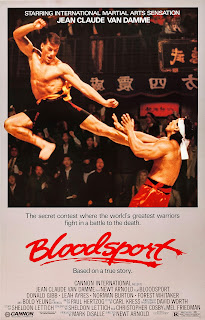 I'm not sure why my parents enjoyed this movie. I mean, I know the movie is somewhat enjoyable on its face. American's love action films, generally. But, 1) I swear we saw this movie more than once at the second-run Academy Theater and 2) other action films make more sense for, you know, religious folks. I mean, Rambo fights evil Communists, John Matrix fights, um, that guy who's raising his own army for... reasons I don't remember. John McClane fights "terrorists". Etcetera. Frank Dux is just fighting other fighters for... well, for sport, I guess. But, it' snot like my family were fans of wrestling or boxing. They watched baseball, and fairly exclusively baseball. No basketball or football, and no soccer. They'd watch the olympics, but not the fighting sports. But, put the violence on the big screen and they were there. All the obvious action movies. Arnold. Sly. Chuck. Clint. Not much Seagal but he showed up about the same time Van Damme did, and maybe they didn't watch much Van Damme either. I know we saw Kickboxer in the theater. And Hard Target. And Universal Soldier. And Timecop. But, after that it might've been more me and my sisters.
Or maybe just me.

Hell, about a decade ago--I forget exactly when, but I know it was a piece I was working on for the speech team at Glendale, or maybe it was Calstate LA--I watched just about every Jean Claude Van Damme movie, rewatching the ones I'd already seen (which was most of them) and catching up on some of the later direct-to-video ones. I was working on a translated version of his awesome fourth-wall-breaking monologue from JCVD for an interp speech.


(Which, I think doing a translation was definitely frowned upon and probably even against the rules. But that monologue was great and I wanted to act it out.)

The 80s were weird. It's like Russia could launch a nuclear attack at any time, so here watch some white guy or another hit, kick, and/or shoot some folks (often) with darker skin. And, people ate it up. I mean, there were the huge actions stars, but then there were just so many little action movies, direct-to-video action movies, and it feels like we saw them all. Saw a lot of horror films too. I remember when I record my first episode of my Michael Myers Minute podcast, my sisters Brooke and Bobbie and I wondered why our mother loved the original Halloween so much. And, loved its sequel. And loved the fourth one, when Michael came back. But, she also was the reason we drove away from the drive-in showing A Nightmare on Elm Street while the film was still going, and we never saw any Friday the 13th films on the big screen until Jason Takes Manhattan. Little horror films for rent on video, sure. Why not? Except, why? And, why did our mother (more than our father) get more conservative later? And, why was it sort of pick-and-choose through the 80s? Why did we watch every Chuck Norris film and every Arnold Schwarzenegger film and every Sylvester Stallone film? Why, when Bloodsport came out in '88 did we go see it more than once?

I imagine it's just a constant sort of hypocrisy, or like a razor's edge judgement call. At least, I imagine that when I'm feeling generous. Or, taking it further, was it an existential thing in the 80s? Like it didn't matter that we saw comedies with a bunch of sex and nudity and horror and action films with blood and violence because the world was about to end anyway. And, when the Cold War fell apart (and not long after, the church I was raised in also broke apart), there was room to breathe a little, and that meant also there was room to be more strict. Or maybe the way several of us kids turned in different ways away from how we were raised scared them into trying harder. Or maybe they just got older.

The specific thing for our parents, our mother, could be one of multiple things, or several things combined.

The larger American problem is, well, a larger, American problem. We love violence. It makes sense, as I'm sure I've argued in the blog many times before, because our country was born in violence, born in revolt. And, as an ongoing thing, violence fits the American Dream approach to everything else. If at first you don't succeed at something, hit it harder, as it were. If you don't succeed, it's because you didn't hit it hard enough. We built our cinematic Western mythology (and our American myth) on rugged individualism and good men fighting off bad men to protect what is theirs.

And, it isn't law bad order that we love, either. It is might makes right or as we probably often feel it instead, right makes might. If a person is stopped by the police, he must've done something wrong because we want to believe the police do the right thing, because otherwise, it's all falling apart. If an action hero takes down the bad guy, we cheer, and it's all the same damn thing. As long as we can know, explicitly in a scripted story, or implicitly in life, who the bad guy is, "turn the other cheek" is just a cute line in our scriptures, but what really matters is going old school, Old Testament on someone and beating them down because they're bad, they deserve it.

But, then I gotta circle back around to Bloodsport because there is barely a bad guy. I mean the movie plays at Chong Li as a villain, but he's only specifically worse than any other fighter in the Kumite once, maybe twice. I mean, he does kill a guy, but that is not actually against the rules. And, it might've been smarter for some of these fighters to just kill their opponents outright, get in, get out, and win.

That's how I think about it, because I was raised on shit like this. Action films. Violence. Even Bloodsport now--the fight scenes all hold up pretty well still. The acting, especially from the kids in the beginning, is not great. But, those scenes are just backstory and filler so we can get to some violence, some blood, and some awesome (but forgettable) 80s movie anthems.
Posted by robert e g black at 10:33 PM