any technique that works

Bloodsport opens with a montage of violence, mostly against inanimate objects: blocks of ice, coconuts, punching bags, boards, Cut together with setup for the Kumite. 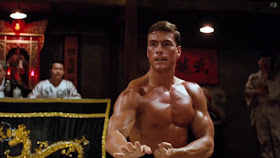 Watching the film for the first time in many years, I'm reminded by the lies behind it. Like Frank Dux--the character played by Jean Claude Van Damme in this supposedly true story--said the following in Martial Arts magazine:


My involvement in that tournament was part of a plan, launched in 1975, t infiltrate the criminal organizations that organized the fights. The original idea was to participate in the Kumite tournament and make a few contacts. We initially assumed I would lose, but eventually I became one of the best Kumite fighters to ever participate in the event.

A 1980 article about Dux and the Kumite in Black Belt magazine opened with this disclaimer:


Although there is no convenient way to verify each and every detail connected with this story, the editors have verified enough of the basic facts to feel confident in publishing it. But since we are not at liberty to share the corroborating evidence with the public, we acknowledge that each reader may have a different idea of what the facts permit him to believe.


Military records show that Dux never ventured closer to Southeast Asia than San Diego. His only known war injury occurred when he fell off a truck he was painting in the motor pool.

I would point out that Dux claimed that the 1975 Kumite in which he fought was held in the Bahamas. That the film puts it in Hong Kong is a separate issue... And Johnson covers that just a paragraph later, so the line about Southeast Asia was a little disingenuous.


Duc's trophy from the Bahamas event was at least partially made in the San Fernando Valley... The ceremonial sword he won in the fights was sold, Dux said, in a failed attempt to buy freedom for... Philippine orphans [held by pirates].

Dux argues that his claims are difficult to prove or disprove because of the secrecy surrounding both his military record and the clandestine tournament...

The real story of Frank Dux, say many who know him, is one of a bright but undistinguished young man who, using cleverness and chutzpah, re-created himself as a super-hero a decade ago, painstakingly authenticating his new persona with military medals, trophies and newspaper clippings of questionable origins...

No trace of [his teacher] Tanaka could be found in historical texts or from independent martial arts experts.


says the only alleged witness of Dux's participation in the Kumite later confessed to him that he was told what to say by Dux. Lettich said that the premise of Bloodsport came from Dux's tall tales.

But, regardless of Dux's likely lies, deepjuillet, 13 July 2017, offers this:


But, in a time when we hear many more lies every day from the people we trust, I'd raise a glass to Frank W. Dux and say, "Your story may well be a lie, but it helped many to believe in themselves, that they can do impossible things, if only they persevere."


Perhaps the Frank Dux in real life is an imposter, but his persona on the screen will remain as a legend for a generation of viewers.

Sounds about right for 80s action movies. Who cares if they make sense, or tell truths, as long as we can pretend they do and imagine that they mean something as to what we might be capable of ourselves.