people against goodness and normalcy

Backing away from the serious angle, I must admit, I don't really understand Reverend Whirley's plan. Teaming up with the pornographer so they can keep their dispute constant and both profit off of it is actually an interesting plan. Except, that is not the Reverend's plan. That is what it seems like his plan is, and what the pornographer thinks the plan is, but then, no the police commissioner is in on whatever it going on as well, and they're going to kill the pornographer because... reasons.

Seriously, what does killing Jerry Caesar get the reverend? Bait Magazine will likely still continue. It's been around for 25 years, so it's most definitely a corporate entity far bigger than Caesar. And, there are other, similar magazines out there; will the reverend kill each one of those magazines' owners as well? Is this going to be an overt, and even publicly acknowledged, war on smut, as it were? And, if so...

What is the purpose of the P.A.G.A.N situation in the film? Wouldn't such a group appreciate pornography? Maybe if they had their own publication and this was a larger plan to get rid of the competition, it would make more sense. But, it's not that. And, there is no clear indication that the reverend will own Bait in the absence of the pornographer. So, how does the plan even work? Or is it deliberately confusing and chaotic because the screenwriters believe, or expect us to believe, that pagans want anarchy, or at least chaos?

For that matter, what kind of... Well, what kind of any organization calls itself "against goodness"? Without being some sad punk exercise in shock? And, P.A.G.A.N. Is not quite that. They leave business cards, sure, but they don't seem to be trying to make a huge public statement exactly... Except they are. Except they aren't. This is another problem, actually. Do they want recognition? And, if they do, why do they clean up after the big party instead of leaving evidence behind? What is their goal, even beyond whatever fuel they might give to Reverend Whirley? Does he believe in their stuff and the public Christianity thing is a ruse? Or vice versa? Why doesn't the move tell us any of this?

"We believe that bad sex and good drugs are the cornerstones of a good democracy," The P.A.G.A.N. manifesto begins. (The next line is about pornography but Friday cuts Streebeck off before he can read it.) The film's version of "pagans" is more like a 70s' paranoia version of Satanists (their logo is even a goat's head like you'd find in a Satanist pentagram), and it occurs to me that in 1987, I'm still going to church every week, private school 5 days a week, and as far as I'm being taught, pagan and Satanist are interchangeable. Except they're not interchangeable. The movie is confusing pornography with paganism with satanism... with Christianity and with corrupt policing. Which blurs so many lines as to make no real sense of any of those things. Meanwhile, in a shallower version of what I was saying yesterday, our hero cops damage property, commit acts of torture, get warrants based on faulty information, and act without warrant when they feel like it, and we cheer this on because it's the fucking 80s and it's fucking America and that is how movies work.

But, looking back the film now, I don't quite know why any of the bad stuff is happening so I don't care if the heroes keep it from happening. Except, I guess, the kidnapping of the virgin Connie Swail.

And, the inconsistency doesn't stop there. Take Friday's and Streebeck's undercover outfits for the P.A.G.A.N. event. Friday's voiceover about how their outfits fit current gang members seems to be meant to play as the setup for the punchline of their outfits being entirely wrong. Except then they not only fit right in at the event but their outfits get more outlandish with the goat leggings they are handed on their arrival. 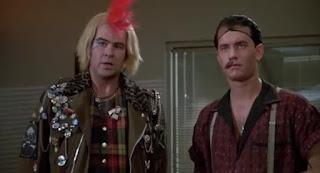 The joke refuses to be a joke. The bad guy refuses to be a bad guy. And, Friday refuses to be your stereotypical 80s cop... Until he very much becomes one and nevermind the plot so far, Reverend Whirley is a kidnapper and wannabe murderer, so his motives don't matter anymore. And, that feels far too easy. And, here I am, 11-years-old, still stuck in my cult upbringing, still stuck in the Cold War end of world and all that, and this is the morality that I'm getting?

Not that I should be seeking my morality in buddy cop comedies, but whether or not I'm looking for it wherever I can because the one I'm given at church and school isn't quite holding up (I'm not sure I'd quite rejected it at all just yet, though it was clearly having trouble sticking), but you don't have to seek it somewhere to find it somewhere. Movies shape the world. The world shapes movies. And movies shape the world. Etcetera. Repeat ad infinitum. Doesn't matter if we like it. Either side of it. We identify with characters, we are shaped by those characters. We are shaped by their actions, their choices, their morality. When Doug Masters steals and forges documentation to go rescue his father in Iron Eagle, we side with him because nevermind the rules when it's the right thing to do. But, what does that morality become later? See that, and so many similar things, as a kid, what does it do to your (my) idea of right and wrong, your (my) idea of what rules are good for? And, if rules can be measured by rightness, then rules have no objective value, and whatever I decide is right is right and I can do anything I want to do--


a cop beating a protestor is equal to a protestor beating a cop in this regard as long as either one thinks they're right, and we need better than that

--and you don't have inherent value; you have the value I put on you. Your interests have only the value on put on them. And, we are all fucked. Not because some of us are wrong, but because all of us believe we are right.
Posted by robert e g black at 9:54 PM