the people that come in here need help, not condemnation

From the opening slasher moment I mentioned yesterday, Jack's Back cuts to a cheap knockoff of Peter Gabriel's "Red Rain"--and they purportedly wanted "Red Rain" but couldn't get it. And, it's obvious that 1) this movie is taking itself seriously, which will be good later, and 2) this movie is going to feel fairly generic if you've seen enough movies, and will be even more generic if you watch it a few decades later and write about it.

And then the movie goes from the knockoff song to jumping to the day of the final copycat murder, which is a waste of a far more interesting plot, but I will get to that below. 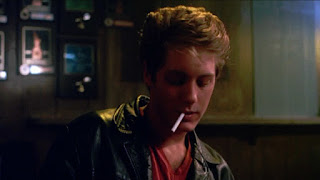 Roger has a great Line about the plot of this film:


All of this sounds contrived. Of course it is contrived. A movie like this is nothing without contrivance, and one of its pleasures is to watch the plot gimmicks as they twist inward upon themselves, revealing one level of surprise after another.

Roger may have bought Jack as the killer. Been taken by that ruse. And yet he does not complain about the alleged killer--who is copycatting Jack the Ripper, mind you--being named Jack, but really, that is not the biggest issue with the Jack the Ripper connection.

This is not a movie about Jack the Ripper murders is the thing. As Scott Drebit at Daily Dead puts it, "This would be my one quibble with Jack's Back--if you're going to make a Jack the Ripper movie, give me more kills."

Drebit offers a little consolation in suggesting that director Rowdy Herrington didn't intend to make a movie about the murders; rather,

But, Herrington doesn't even get the one "Jack the Ripper" murder that happens during the film right anyway. So, 1) it might be a good thing that the other murders aren't depicted, nor their aftermaths but for one photo we see clearly. Mary Jane Kelly, the Ripper's last canonical murder, was mutilated and dissected to a far greater degree than would be possible in the time between Jack giving Denise Johnson (the last victim here) an abortion and him going to get her a prescription and returning.

But more importantly, 2) aside from it happening to be 100 years since the original murders, there is no reason that this movie needs to have anything to do with Jack the Ripper at all. Jack's Back wasn't even the original title. Herrington wanted to call the film Red Rain, hence wanting the Gabriel song. But, the budget was only a million dollars, and a) they couldn't afford Gabriel and b) Red Rain (and Red Harvest after the replacement song) don't fit the plot or tone of the film anyway.

Todd Martin at Horror News Net says "that one of the strongest things going for this movie is the fact that it has a strong script and is very well-written." 1) that's redundant, unless you have seen a "strong script" that was poorly written, because that feels rather impossible. But, 2) I disagree. What works in the film has very little to do with its script, and more to do with the focus on characters. Herrington writes and directs and he is clearly better at the latter. The script includes things like cops wondering if twins have the same fingerprints--they don't--and a reporter recognizing that Rick looks like his dead brother when she shouldn't have seen the dead body, and the cops should not have been handing out photos of the dead guy at the scene where he hasn't even been taken away to the coroner yet. The script includes dreams and hypnosis in a story that would be better served being grounded in reality.

John doesn't work at a free clinic and moonlight at some homeless village; he works at a hospital and moonlights at a free clinic. Why? Because then we have room to actually get to know Sidney as a character beyond 80s paint-by-numbers police captain (which is already silly in addition to shallow because he's not a police captain and there is a police captain in the film). We see him yell at Denise--a prostitute who is also pregnant--so we might assume he dislikes prostitutes, but it's so brief we hardly care. And, when he turns out to be the Jack the Ripper copycat in the end, we might enjoy the twist in the moment but if we put any thought into it at all, it falls apart. Why is Sidney copying Jack the Ripper? Why is he killing prostitutes? Does the former lead to the latter or vice versa? But, if Sidney's problem with prostitutes comes out in his interactions with John--yelling at him for working at the free clinic and helping out the dregs of Los Angeles--instead of yelling at Denise, who we never get to know as a character (and if we blink at the wrong moment, we never even learn what she has to do with John in the first place, when they recognize each other--she was his... prom date, I guess; we see a photo) and then disappearing for a good portion of the film.

Let John survive longer into the film. Let him get caught up in the mystery of who is killing prostitutes because he knows the victims from his work at the free clinic. And, then there is more time for Jack to also be set up as the first red herring because there would be more scenes at the clinic and the hospital and we might actually have room to try to solve the mystery of who is killing prostitutes--

--and who is not copying Jack the Ripper because that is a far different film that needs to spend time with its killer more than spend time with its investigator(s). Go watch Time After Time if you want to see some good Jack the Ripper action. Or, in a pinch, watch From Hell but really you should skip the movie and just read Alan Moore's graphic novel if you want to go that route.

Doctor who has grown tired of helping poor people and prostitutes at the county hospital or wherever decides to just rid the world of them one at a time. One of his med-school interns starts to take an interest in the murders and gets a little too close. Fortunately, another intern (or whatever Jack is) is acting suspicious because he has been giving some of these same prostitutes abortions on the sly. The twist with Jack killing John in a rage and then disguising it as a suicide still happens. And we can still get the surprise twin brother...

But, maybe set up the twin with more than just one little photo we pay no attention to. Mention a brother, but not that it's a twin. The way the twin revelation plays is one of the best parts of the movie.

Then, since the film is going for a film noir vibe (just listen to the music that plays when Rick visits John's apartment), sure, the police turn their sights on Rick, and Rick has to investigate what happened to his brother while running from the cops

and he has to also investigate the initial string of murders because the cops are too busy chasing the wrong man. And, to play up the social commentary and Sidney's classist drive to murder, maybe Rick has to get close to some seedy characters. Like he isn't already a little criminal himself, doesn't already know where to find a gun on short notice but has to figure out these things, and work closely with prostitutes and pimps and derelicts, humanizing them at the same time the film monsterizes Sidney (and maybe even Jack). Film noir often involves classist critique and commentary. There is room for the first act's passing focus on the homeless and on prostitutes to actually matter and not just affect the plot but affect the people in the audience.

Also, I swear the police in this film do absolutely nothing in this entire film that follows proper procedure.
Posted by robert e g black at 8:58 PM