given way to taser guns and anodized metal batons

And the “Have a nice day” on the front of the “police rescue” vehicle.

And not just this movie. So many other movies from my childhood that involved cops that operate outside the law, military heroes who operate outside any rules of engagement, and not just in dramas or action films. Take Soul Man just a week or two ago in this blog, for example--can't get into Harvard, lie and pose as a black man to cheat your way in. The Secret of My Success--can't get the job you want, lie, forge documents, and manipulate your way into a job that doesn't even exist. Iron Eagle--the military won't go rescue your father, nevermind the potential international incident you might create, the war you might incite, nevermind the penalties your friends might receive for helping you, nevermind that you're killing military men just like your father over decisions far above their heads; just go on that mission yourself (well, along with the mechanic from the airbase) and damn the consequences. And that's just three recent films in this blog.

Dragnet is a comedy about one cop who is very by-the-book and one who is little less so, but by the end of the film, the point (cue that line from the end of Demolition Man is that Friday needs to get a little dirtier, operate outside the law...

Even though a point is made of giving him back his badge... But that is sorta the problem, actually; give him back his badge and the audience can far more easily accept his improper, even illegal behavior. Like Dirty Harry, we get that he's a bad cop but he gets the bad guy so we don't care. Friday stops the corrupt minister. And, how much do we cheer that on, when we're all pretending we're a good Christian nation and this minister is secretly into pagan ritual and working with a pornographer and a corrupt police official. The system itself is corrupt so, of course, a corrupt detective has to save the day. And have sex because virginity is improper in the universe of this film, and Friday is an oddity. 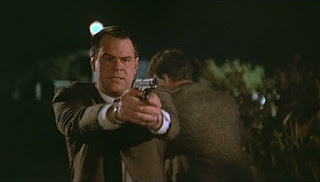 Except even Friday deliberately leaves Streebeck alone with a suspect knowing damn well he's going to hurt the man--the aforementioned balls in the drawer. Friday should be the best detective, not a running joke (he is sort of both, actually), and even he is okay with a little police brutality if it gets answers. Even though torture has been proven to be far more effective at getting whatever information they think you want instead of the truth.

I mean, I think of all the films I saw growing up that the hero operated outside the law, committed great acts of violence to beat the bad guy, and imagine cops today having grown up on those same films, grown up on an America where our pop culture just reifies the idea that if at first you don't succeed, you just apply more force, if at first you don't beat the bad guy, hit him harder. Rocky. Rambo. Cobra. And not just Stallone characters. If you can identify an enemy--and movies, of course, clarify the villain pretty clearly most of the time--then it doesn't matter what kind of force, how much man power, how much weaponry, you direct at them, it is all okay.

And then there's the real world. Protestors being quashed by cops who wear body armor, carry bean bag guns, fire rubber bullets, beat people down with batons, poison them with tear gas, and we're supposed to think because some protestors looted, then violence is the answer, the cops are perfectly fine, and they should be firing real bullets, right?

From my tone, and if you've read my blog before, or know me at all, you should know that I don't side with the police on that one. I'm somewhere in the realm of the abolish and defund crowds. Screw reform. Start from scratch. Stop pretending that force is how things get done and might makes right. And maybe never have cops killing people, ever. When the gun control crowd defends their views saying, "no one wants to take all your guns," I'm inclined to be the exception there, because fuck your guns.

It occurred to me today that I don't recall any riot in this country where the rioters weren't on the side of right. Folks trying to form unions, folks trying to stop wars, folks trying not to be treated like secondhand citizens at best, be put down by cops at worst. I don't side with the authorities when it comes down a choice.

And, without taking that further, I am inclined to wonder, if it was, say, action movies and such from my childhood that reinforced the idea that anything goes as long as you think you're right, or as long as you already sit in the seat of power... Then what movies turned me against that. Like, writing about Mannequin, was Hollywood Montrose the first openly gay character (however much he was still a caricature) that ended the film on a heroic note and wasn't the butt of jokes as much as the fuel for jokes on others? When did I start to really turn away from my conservative, religious, right-wing, world-ending roots and drift toward revolutionary-loving, bleeding-heart liberal? And how much of that came from movies? What did Dragnet do to me? How did it influence my view of cops? Of ministers? Of pornography? Of virginity? Of drugs? Of Paganism? Of anything?

And, why didn't anyone else get those same messages? Why didn't everyone else my age turn liberal?