Moving on through 1987, we get to Innerspace.

This movie starts like a it thinks it's a drama. Two hours long, it's 11 minutes before they even mention that any "project" exists, more than 15 minutes before we know what the project is. It's like a weird rom com threw up on a science fiction film and this twisted baby burst out of a bubble on its back. And, then they forgot it was a comedy. Or maybe I remember it as more of a comedy than it is. I mean, we've only had a few seconds of Martin Short so far. The physical comedy was brief, though I know there will be more. 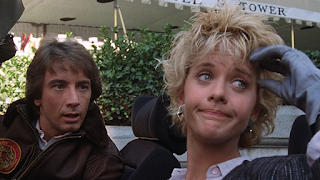 Nineteen minutes before we see the needle, and the script hasn't explained what just happened. Which is nice inasmuch as it's showing, not telling, but is slow in taking so long to get to the point. No 17-minute mark for this movie, obviously.

I stopped typing and just watched the movie. So, my daughter grabbed my keyboard and typed the following:

Hello. I want to say something in this blog so I am currently typing so you can read what I wrote for this blog. Sometimes blogs are written and they have words that mean something and this is why you are reading this right now. I hope you enjoy and learn from this essay.DO IT FOR THE BLESSAY. BLESSAY YOUR HEART.

Me--I don't think this movie has much room for getting serious about... Whatever. Maybe I'll come up with something tomorrow.

I will mention because I noticed it (without remembering that Lydia is pregnant and Tuck finds out by being briefly stuck in her body instead of Putter's)--I'm pretty sure that early in the film when we see Lydia at work, she's got an ultrasound photo on the picture frame on her desk. Which is a very subtle setup.
Posted by robert e g black at 9:53 PM