this is a restricted area

Today for Connorsmas, my daughter got me this: 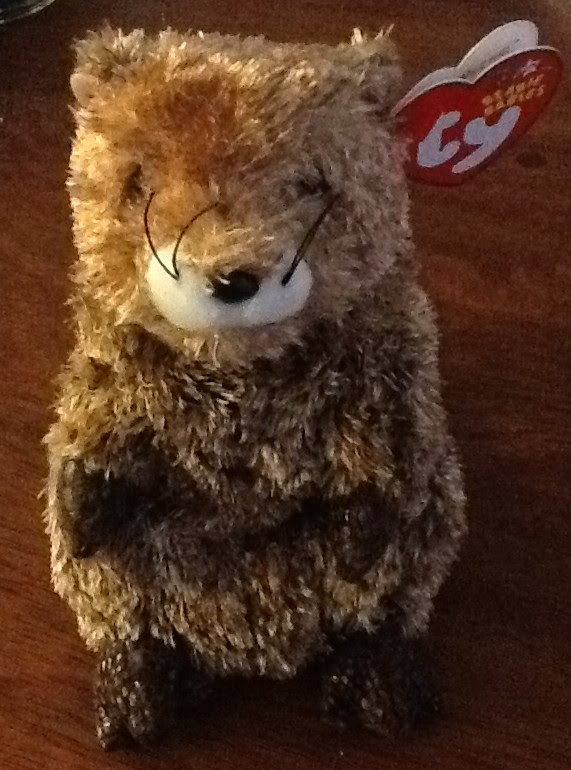 1. That’s the Beanie Baby version of Punxsutawney Phil (his name is Punxsutawn-e Phil). Inside this tag is the following poem:

At Gobbler’s Knob in Punxsutawney
Lives a groundhog who’s big and brawny
Punxsutawney Phil’s the name
Predicting spring is his game!

And he was born February 2, 2002. Twenty years after Rubin et al went to Punxsutawney to see the festivities to figure out what they could use in the film.

2. Yes, I called today—December 25—Connorsmas. Yet another way for me to be blasphemous and cute at the same time. It occurred to me recently that Phil is not the only person to die in Groundhog Day and come back. O’Reilly does the same, and he dies without the expectation the next morning that he might be alive and… as well as could be expected for a homeless man.

Speaking of O’Reilly, what kind of nurse tells the next of kin (as far as she knows) that his loved one (as far as she knows) “was just old” and “it was just his time”? You might tell a kid that… about a pet. You don’t tell an adult that trite nonsense. How about a medical diagnosis? He succumbed to the elements, maybe. Or his alcoholism—remember Gregory Solman (1993) calls him a “wino”—finally got the best of him. A bigger issue is that this nurse seems to know that “the old man” is no relation to Phil, which a) sort of excuses her silly diagnosis and b) implies that she also probably has an idea who the old man is. He does seem to be the only homeless person in Punxsutawney, so probably everyone knows him. In Ramis’ second revision of the screenplay, the last we see of O’Reilly (dead) also implies a local fame/familiarity. It goes like this:

Phil kneels on the cold ground beside the old bum who lies huddled against the wall, immobile.

Rita is standing by at the end of the alley, watching as Phil examines him.

Phil writes something down on a small pad. He finishes, and sets it down by the old man. Then he takes his coat and uses it to cover the man up. A siren is heard.

Phil stands and walks away, as an ambulance pulls into the alley.

RITA
In a minute.

She waits and watches.

The paramedics, BUD and ANDY, get out of the ambulance and inspect the scene.

RITA
May I see that?

Rita hands him the note and quickly walks away.

ANDY
Suppose he wrote it?

BUD
(doubtful)
Are you kidding?

* The copy of this screenplay available online (and which I’ve got a physical copy signed by Bill Murray and Chris Elliott) has the name as “ol1 Really.” I’ve assumed since I first read the second revision that the original was scanned and run through a reader program, and it mistook what should have been O’Reilly.

(And, I apologize for the screenplay formatting not working quite right. Trying to blockquote lines and go back and forth between paragraph tags and line break tags does weird things to line spacing)

My point in including this scene in entirety is twofold: 1) I think it’s nice to see stuff that didn’t make it into the movie. 2) Bud and Andy both know who O’Reilly is, so the still unnamed nurse probably does as well. She just calls him “the old man” but I’m sure she’s seen him when she’s down by Gobbler’s Knob. Hell, she probably saw him just that morning when she went to see the groundhog festival along with everyone else.

Phil’s final lesson in Groundhog Day (arguably) is that he cannot save everyone. It’s a weird lesson where it comes in the filmic presentation of Phil’s journey as we have not seen Phil save or even try to save anyone prior to O’Reilly. O’Reilly’s death still demonstrates Phil’s limits. And, on the final day of the loop, Phil makes something of O’Reilly’s sacrifice by performing all his good deeds for the people of Punxsutawney. Phil may have sacrificed himself earlier—or as I’ve suggested rather glibly before, he died for us—but O’Reilly died for Phil. So, maybe I shouldn’t call today Connorsmas but O’Reillysmas.

Today’s reason to repeat a day forever: to invent new and interesting holidays befitting whatever calendar day my repeating day happens to be, and to trick all those around me into celebrating.