do you have life insurance

An addendum before I get into today's... rambling: it should have been three hotels yesterday. I had forgotten that our coaches trip to Palm Springs happened after this project began. That trip would also make two different cars and a minivan in addition to the four planes. But...

It is certainly not the most important aspect of this project--the detail as to all the places I've watched Groundhog Day. Obviously, it's important that I've watched it daily, since that is the point. But...

In competitive debate, we talk about class issues a lot, and it occurred to me yesterday that some people don't have the opportunity to a) travel as I have this past year--to Pismo, to Palm Springs, to Salt Lake City, to Woodstock, to Detroit--and b) to waste their time with a project such as this one. Not that I believe it to be a waste of time. It isn't. But, it is certainly the conspicuous spending of time a lot of people simply do not and cannot have.

(I don't have Daughton handy right now, so I will leave out the proper year citation. I also will not be able to properly quote Daughton)

Daughton talks about Phil Connors' situation in comparison with that of the Other (for Phil), working class and lower middle class people trapped in their day-to-day lives by economic circumstance. Phil's situation is not economic on any literal level, of course. Economically, Phil is probably doing quite well; in fact, in Ramis' (1992, January 7) second revision, Phil drives himself to Punxsutawney in a... I think it's a BMW.

(I'm on the plane as I write this, so I cannot check.)

I've suggested before that Phil's situation actually foregoes all economic concerns, really. Along with not needing to sleep or eat any longer, he also has no need for money, no need to work. It might be an ideal situation if there were some way to leave a mark on the world... And, I admit that might seem wrong to, say, a Buddhist. When I wrote about Mandalas in relation to Groundhog Day before, I compared the transient nature of Mandalic art to that of Phil's ice sculpting. Phil's sculpting is not about leaving his mark on the world. In actuality, Phil manages to find pastimes that make time and its passage irrelevant. He reads books, he plays music and he sculpts ice. Each of these things can be done within the time loop in the same way it can be done outside of it.

(I would mention that if Punxsutawney had a good movie rental place--it's 1993 so probably a Blockbuster Video--Phil could watch movies like he could read. With the internet today, movie (and TV show) watching could go on for quite a long time.)

Phil embraces his temporal captivity, finding things he can do under those circumstances (In deleted scenes, he is shown to have also mastered bowling and billiard skills). This adaptation to the circumstances forced upon him by the universe is exactly what Daughton is getting at. Everyone else is still operating under notions of time and space (and society) as malleable things, things that come with requirements and responsibilities. In terms of the time loop, everyone else has become whatever the opposite of the Other is. They still have jobs to get to--after they take some time out to celebrate that local holiday, of course--families to take care of, homework to do. They still live in the world in motion, with societal expectations, economic responsibilities. Phil is now the Other. But, his story barely seems like a hardship, except perhaps when he goes through his depressed, and eventually suicidal, stage. It's like some romanticized portrait of a poor family who live free off the land, unshackled by society's rules; they don't need to work for the Man to get by, they don't need to worry about jobs and social norms and mores. They can live like communal hippies probably dreamed... except, as I said, that's a romanticized idea. The working poor, for example, are not free from the shackles of society; rather, they have extra shackles, concerns about shelter, about their next meal, about the possibility of injury or illness costing them all the money they might have saved, if they ever actually managed to save any. 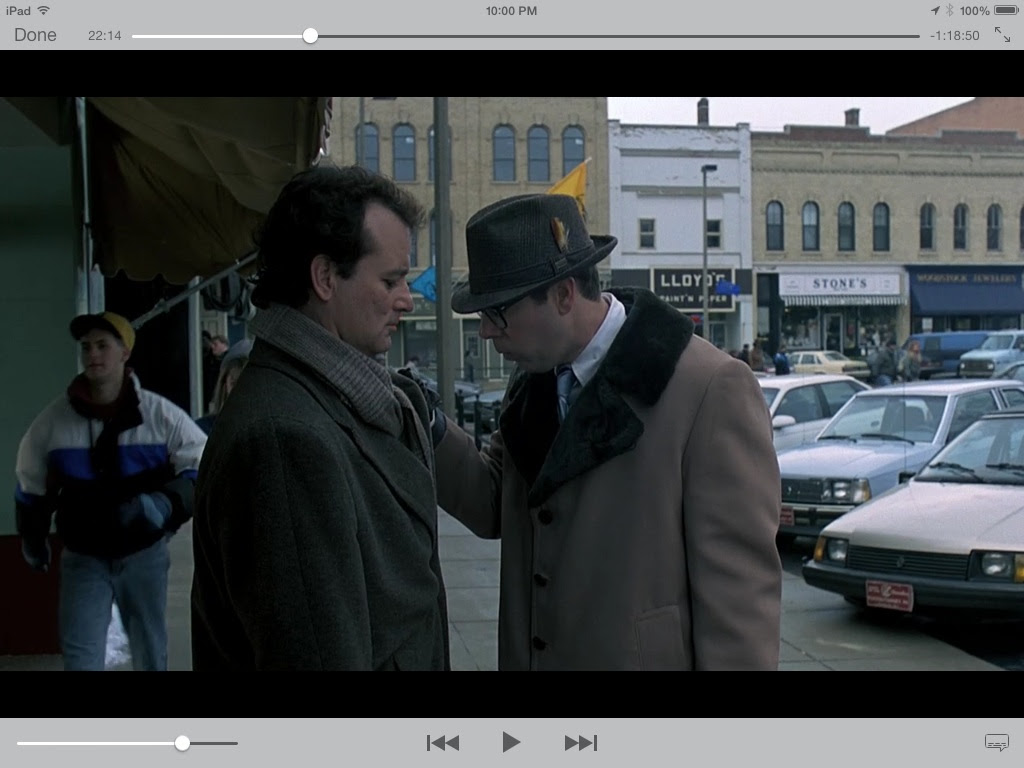 I'm not rich--three of the trips I mentioned above were paid for by the University--but I am also not so poor that I worry about where my next meal might come from. Still, I don't have much money saved. Fortunately, I can afford insurance, or I might worry about medical bills. And, I do have the time to do projects like the Groundhog Day Project. I have time to build with my closet full of LEGO blocks... and I can afford to have said closet. I am not the Other. I am more like Phil Connors, sent by my employer on a trip across the country--well, he didn't go that far--but, unlike Phil I look forward to such trips. I like coaching, I like taking my students to a national tournament...

Phil has the benefit of no such attachments, I should point out. While, in Rubin's original script, he does have at least a mother to which he still has some attachment (and he even manages to get out of Punxsutawney to visit her, only to be yanked back by the time loop when morning comes), the film version of Phil Connors has no such apparent attachments. Ned mentions Phil's sister, but Phil never speaks of her. He might not even think of her much... at least, pre- and early-loop Phil probably doesn't. Later in the loop, he probably thinks of his family, maybe even misses them. He may even have those he would call friends back in Pittsburgh, maybe some fellow on-air talent from WPBH with whom he goes out for drinks after work sometimes. We don't know that Phil's misanthropy is complete.

My point is this... or my points are these, rather: a) I realize I am better off than many, but I think that everyone can benefit from seeing and contemplating the ideas in this film (and here in these many blog entries as well), and b) Phil does seem a reasonable stand-in for the Other, stuck in a situation out of his control. Sure, he manages to find a way to thrive within that situation but he has seemingly unlimited time and no real responsibilities to take away from that effort. And, I could suggest that we should all, rich or poor, lower class or upper class, find ways to thrive within our circumstances, to live within the means were are allowed. But, I would rather hope that somehow we could find our way around and outside of the circumstances and restrictions put upon us, and that those of us with more room to stretch could help others out. Like Phil on that last day of the time loop, I'd like to think that given the opportunity to do so, we would all choose to help those around us in trouble. Sometimes, I actually think the best of we humans.

Or maybe the high altitude is just getting to me.

Today's reason to repeat a day forever: a combination of two ideas I have presented before: to meet and get to know and help everyone around me that I can and to share the process of clearing out not only my Netflix queue (and every other film and TV show Netflix has, with the people I meet.