that glass is half full

...Suffering is one very long moment. We cannot divide it by seasons. We can only record its moods, and chronicle their return. With us time itself does not progress. It revolves. It seems to circle round one centre of pain. The paralysing immobility of a life every circumstance of which is regulated after an unchangeable pattern, so that we eat and drink and lie down and pray, or kneel at least for prayer, according to the inflexible laws of an iron formula: this immobile quality, that makes each dreadful day in the very minutest detail like its brother, seems to communicate itself to those external forces the very essence of whose existence is ceaseless change.
-- Oscar Wilde, De Profundis

...you can follow Phil's lead to achieve this transformation in your own life. Like Phil, we can all wake up and discover joy rather than boredom, hope rather than emptiness, and love rather than self-absorption.
-- Paul Hannam, The Magic of Groundhog Day

Sometimes I watch this movie and I figure I could write a self help just like Hannam did, take this... little cinematic piece of... if Rita can call a sticky bun heaven I can call this film heaven. To be fair, since, you know, she did 12 years of Catholic school and is a nice wholesome character in a popular film, it might be safe to assume she's a Christian. I, as I have mentioned before, am not. So, heaven is just a word... with a whole lot of cultural baggage attached. James Parker, The Atlantic Monthly, May 2013, suggests that to get the message of Groundhog Day, you must be "a seeker: spiritually curious, mystically a-tremble, slightly mentally ill, whatever." I think anyone can get the message of Groundhog Day. Of course, I think in our modern age, most anyone is probably at least "slightly mentally ill" if not the other things Parker lists. I am--or was when I began this project if not currently--all of those things Parker lists. For a while in the 90s, I had that poster from The X-Files--you know the one; it's got the flying saucer hovering over the woods and across the bottom it says "I WANT TO BELIEVE" 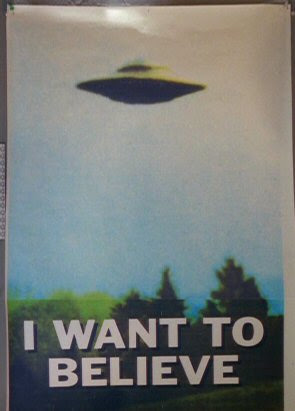 --on my wall. I've still got the poster, but it no longer dwells on my wall. On my wall are framed images of each of my three kids and posters of two paintings (on either side of the mirror attached to my dresser):

Hokusai's The Great Wave off Kanagawa 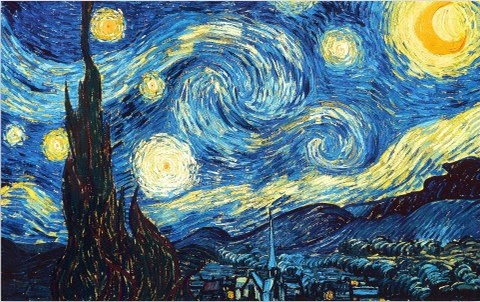 The former reminds me, like the view out my window at night, of my place in the universe, subject to greater forces than me (but not supernatural or Godly ones), but able to deal with the whims of the world, able to take my hits and keep going.

The latter reminds me (often by way of the Doctor Who episode, "Vincent and the Doctor") the universe is an amazing, always in motion and full of great beauty, and I am a part of that motion and that beauty.

(To be fair, there is also a LEGO Movie poster on the wall in my LEGO closet, Benny the classic space man who just wants to build spaceships. And, maybe the presence of this poster, plus the fact that is is upside down and angled slightly, says more about my personality than the other two.)

Phil doesn't get to choose what decorates his room at the Cherry Street Inn, so there isn't much direct comparison between my life and Phil's here. I've mentioned before the dogs in Phil's room. I have no dogs on my wall.

The posters on my wall are a new thing. I bought them for myself for Christmas. In a way, these posters marked the room as my own. It's the same room I used to share with my wife, but now, it is mine alone. Well, the cats might object to that description, but I am the only human who sleeps there regularly. Someone asked me recently how the whole separation/divorce situation was going--I suppose people will occasionally still ask that until well after the divorce actually happens and life moves on legally as well as practically. I said that it was hard at first but lately, it feels like the right thing. I know it still affects my kids' lives and I wish I could keep that from ever being negative, but on a personal level, not being married has become my norm. It's a new status quo, a new day in my time loop. Oscar Wilde's suffering has been left behind. And, now it's just life. Do what I can for the kids, do my own schoolwork, whatever else comes up--life is life. Parker (2013) says, the message he got from Groundhog Day was, "There is a way back, a way through the imprisoning mystery of yourself, a way back into life." I get that. The imprisoning mystery line, the back into life line--I get it. Sometimes, life derails a bit. But, then we can create our own resumption, build a new day when the time loop resets into a new day, and move forward.

Parker ends his article with the following:

Oh, it deepens with every encounter, this movie. I watched Groundhog Day twice while writing this column. I think I need to watch it again.

We all need to watch it again. You do. I do. I'm optimistic right now. I imagine that tomorrow will be a better day than today, and today was not bad. I am more myself right now than I have been sometimes lately. I imagine a future version of me, and he's got his shit together. I figure I'm on my way to being him. On my TV, Phil just woke up after "god day" and he's got a good thing going on now. I imagine tomorrow I will be productive, I will take some time for something fun (might work on my current LEGO project), some time for reading, some time for school work, and the day will be "a pretty good day."

Today's reason to repeat a day forever: to always be productive, to learn, to teach, to laugh, to cry, to make the world a better place and me a better person with each resumption.