hard up for material

- May 15, 2020
It's interesting watching Stand By Me these past few days things I notice that I didn't notice (or couldn't have noticed) before. When I watched this as a kid, I had no idea what card game they were playing in the treehouse. I've since played 31 a bunch of times, but only just a handful of years ago. Some background extras reflected in the glass behind Gordie right after he fires Chris' gun accidentally, walk the same bit of block twice--two different takes, I assume. But, also--and this one has an interesting meaning for me--the music that plays when Gordie goes into his brother Denny's bedroom to get his canteen (pretty sure it's just called "Denny's Theme" but I don't think the score was ever released properly, just the soundtrack with all the old songs) sounds a lot--to my untrained ear at least--like a part of the score for a far more recent film Never Look Away. But, then that connection has me thinking about Never Look Away and also about how there's a bit in the Ex Machina score that sounds like--and, I think, deliberately--like music from Jurassic Park. And, then, as I'm typing this, "Great Balls of Fire" comes on during the mailbox baseball and it occurs to me, that particular song was also featured in Top Gun earlier that same year. And, then my mind goes to a pictionary game sometime that same year (or maybe into the next) when I meant to guess "Great Balls of Fire" but instead--because I was an preteen boy and we had deliberately sung the lyrics wrong to that song all year--cried out "Goodness gracious, my balls are on fire!"

In a pictionary game in which my mother was also a player.

But, that's the thing about these older movies. I know so much of the dialogue still. I know the characters and the situations. And, in the best of these older movies--like this one--I can steel feel the emotions and be moved by the story.


(By the way, Stand By Me, Never Look Away, and Ex Machina were all in my top 36 movies when I ran a (sort-of) bracket on my podcast Cock & Bull Minute. Stand By Me has a good shot at ranking near the top going forward (though the process is currently, deliberately, going very slowly.

Yet, I seem to be having trouble writing about the movie itself. Even as I'm imagining taking it in even more painstaking detail in a movies-by-minutes podcast format.

Not that I need more shows in my head or on my docket. I've got three shows running currently, one on an increasingly indefinite hiatus (though I keep meaning to get back to editing episode and have a bank of recorded ones waiting). And, at least two planned for next year (-ish). The format fits me and the way I like to think about movies. And, if not for this blog, I wouldn't even be doing that. Sean German found me because of this blog, had me as a guest on Groundhog Minute and the rest is podcasting history.)

Each of these four boys has their big emotional beat. Even Vern--just watch his face when he's running from the train. 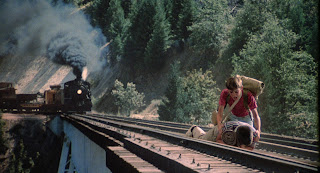 Teddy's comes early. Fighting with Milo Pressman about his dad.

Chris has the big one that, coupled with Gordie fainting after the leaches, marks the climax of the film, even before they find Ray Brower or face down Ace.

And Gordie has several emotional beats, but it is his story.

But even more interesting than the big obvious moments are the way certain smaller moments build. Like Chris drags Teddy off the train tracks to save his life, and immediately wants peace when Teddy gets mad. The two of them trade insults throughout the film, and there's a great moment right after they find Brower and Gordie sits on a log in no mood to do anything. Chris is going to talk to him, of course, and when he tells Vern and Teddy to look for sticks to make a stretcher, Teddy just nods and gets to it. Like in their realest moments, these characters know something needs to be done and they have a good idea of who might know what that is. Gordie does introduce Chris as the leader of their gang.

A notion of plan starts to form in the back of my head. I've got at least one more day with this film in this blog. Maybe there will be more. Or maybe somewhere else.
blog childhood cock and bull connection deconstruction ex machina film films groundhog day project life meaning movie movies never look away podcast stand by me