- May 30, 2020
To continue somewhere before I left off, I was not sent off to boarding school like Morgan. I just had private school, which meant very few friends in my neighborhood, and limited interaction with my friends outside of school, which limited my social life, I'm sure. Or maybe my introversion has other sources and it is just easy to blame the religious environment in which I grew up, and which isolated me from the larger world for a while. I definitely blame that upbringing for my attachment to film. I mean, why wouldn't I envelop myself in fiction as much as fucking possible when I'm being told on a regular basis that the world is ending?

But then, I'm trying to come up with a comedic way to talk about the differing politics of my parents and me, even my oldest siblings and me. But, there's a pandemic and rioting and I am inclined to get into a serious rant instead...

Or to focus entirely on the film today to avoid all that.

As if that's possible. 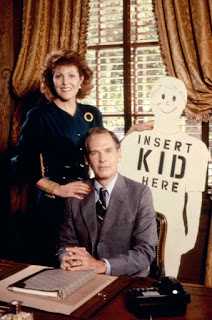 I mean, the whole prank setup early in the film is pointless, though it does set the stage for this brilliant bit: "We did it! We did it! We did it!" Beat, as they realize the headmaster is behind them. "We didn't do it." And, it makes for the strange twist of Morgan not being kicked out of school, rather he's just being called home to, as it turns out, give his senator father's reelection campaign a better family image. Because flying your helicopter to pick up the kid is fine but I guess having your kid at a great school is not... Anymore. For some reason. The premise doesn't quite work, but it allows for interesting interactions later that are nice...

But, it's also strange that boarding schools exist and there are families rich enough to send their kids to them...

I mean, the mother also takes the helicopter to the hairdresser and isn't that silly? Morgan doesn't even know where his family lives and he is left on the roof, alone. And, she expects him to just be the son she wants him to be? I know she says she doesn't subscribe to the buddy-buddy school of parenting, but seven years of neglect for Morgan and seven years of absence for her--unless she cares not a whit for her son, which maybe that's the problem--shouldn't be something where either of them think it can just become something comfortable with no transition time, no change, no negotiation.

That Morgan is brought home as a prop is one thing, but that somehow his parents still see him more as a prop--or a puppet--once he is home and in front of them, and they can see his quirks, and his personality, suggests that his parents are not just oblivious but are actively uncaring and cruel.

And, the film never fixes that. I mean, Morgan's conversation with his father at Arby's is kinda sweet. But then, the end of the film--as abrupt as it is--paints a simplistic picture of magic family repair triggered by Morgan saving his father from having to drop out of the campaign (which if you've not seen the film, is because his executive aide is blackmailing him), but the movie might actually play out more genuinely, when it comes to the family unit, if the senator is not reelected, and they have to actually get along as a family... Hell, there's a better premise--something like Schitt's Creek; having to drop out from the campaign, they can't afford boarding school anymore and have to bring their worldly son home and actually try to get along with him.

Except, they've created a son who is nothing like them. I mean, that is their fault.

Similarly, my own parents sending me to private school, taking me to church, positioning me in between constant messaging of a finite lifetime and access to movies and tv and fantasy books and toys and what do you expect is going to happen? Of course, I'm going to enjoy things like Choose Your Own Adventure books and the more RPG-style Lone Wolf books--which I won't tell the whole story again this time, but those books got me in trouble at the private school, got me sent to the office, got me a stern talking to at home, and got my collection of said books tossed in the trash not unlike Morgan's collection of horror film posters, but of course I was going to latch onto fantasy and stories and anything that offered me a larger world than reality was offering. And, in connecting with so many characters in so many stories, of course I would drift away from the black and white morality of my upbringing, and then the Cold War would end and suddenly, the world was open and I had no real idea what to do in it, so I went off to college I was unprepared for, got office jobs that anyone could do, and lived a socially isolated life still stuffed with movies and books and tv and comics and toys and whatever made the world bigger than my corner of it actually was... Safely. Because, I had no idea how to expand my social circles properly, because private school miles from home meant I never had consistent social circles. What few neighborhood friends I had were entirely separate from school friends, and none of either had staying power once I was first out of high school and then, second, we moved to a new house.

He should trade places with Emily's little brother, really. Let the irritating snitch live with the rich folks, while Morgan and Emily enjoy watching horror films alongside her parents.

Because sometimes a kid needs space. Or a parent needs space. Rather than trying to force the other to fit into the niche you think they should. You know, let people be who they are...

Which sounds easy. Sounds cheesy. Sounds like simplistic bullshit, really. Sometimes trite is easier than the real things you want to say. And, it's easier to pretend that we should let everyone be who they want to be, nevermind that some people are just awful. Some people are too far gone already, too twisted by whatever upbringing and surroundings they had to mold them into the form they fill. And some people aren't even awful, they are just too stuck in their own selfish urges to notice that there are better options than the choices they make, the things they say. It's easier to pretend our differences are shallow than to necessarily fathom the actual divide between some of us.

Like Morgan's mom thinking getting rid of his posters and grounded him from leaving the house will change who he is.