i want to fly

- May 27, 2020
That Ema Hesire just does not want to marry any old guy her mother chooses for here is progressive enough that I think her urge to fly is too much, and unnecessary. But, it makes me realize that the balance of the story is off. We start with Emmy, then we go to Switcher and it is more than 10 minutes into the movie before we see Emmy in the window, and close to half an hour before she comes to life. The movie plays as Jonathan's story but the emotional payoff is Emmy's. I mean, a romantic comedy should have a payoff for both its leads but it feels like Jonathan gets what he wants before Emmy is even in the story. Richards, Felix, B.J., even Roxie--they're obstacles but not significant ones to Jonathan. Ultimately, they endanger Emmy's life (but not really, as I assume she would just be born in some future piece of art and start her cycle again), they don't endanger Jonathan's job. 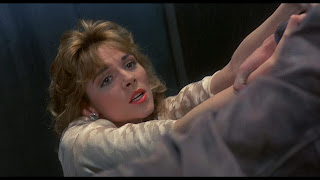 And, thinking about that made me realize something. I never thought of this movie as a romantic comedy, and that is strange. In fact, I always say I am not a big fan of romcoms, as it were, but clearly I'm a fan of certain ones. Case in point, Groundhog Day. No matter how much I argued in phase one of this blog that Groundhog Day is not a romantic comedy, obviously, it is one, even if it is also a different kind of comedy. And, apparently, I grew up on a bunch of them...

So far in this Movie Life childhood deconstruction, I've covered (and skipped because I'd already covered them in this blog previously) the following films that could be construed (perhaps at a stretch) as romantic comedy:


And there are a bunch more coming now that I've reached 1987. I won't SPOIL things but out of 17 movies on the list for 1987, 10 could be construed as romantic comedy. Also, I think 1987 has the most movies altogether out of any of the years on the list.

And, as a metaphor, I suppose wanting to fly is like finding romance, when it comes to romantic comedies and the implicit magic of romance. There's a great line from Richard Curtis

about the realism of romantic comedies. Curtis, writer of Four Wedding and a Funeral and Notting Hill, writer and director of Love Actually and About Time, tells Times of India, that "he is unable to comprehend the argument that serious films are more real than romantic comedies. 'I am so lucky that people watch my films again and again,'" he says. "'I disagree That romantic films are not realistic. It is so strange that someone makes a movie about a serial killer--there have been only three of them in the history--'"

(awkward wording there, plus I am not sure by what definition Curtis thinks there have only been three serial killers. (It might be that India (which the particular publication I'm quoting here is from) has only had three, but I doubt that.) And, this is coming from a guy who shares a name with a serial killer)

--"'and everybody says, "Oh, that is terribly realistic" as if the world is full of murderers and haters.'" Because, it's hardly unrealistic for people to fall in love--people do it every day.

And, they watch romantic comedies.

(And, maybe that is because there were so many around when I was a kid, and the family wouldn't just let me watch Krull and Star Wars and Flash Gordon all the time.)