waiting to worship a rat

There may be a scientific explanation for why groundhogs (in the wild) would actually wake up midwinter. Consider this a sequel to my entry about the origins of Groundhog Day.

“They live pretty solitary lives, are good swimmers and adequate climbers, and, when not browsing on grasses, plants, and tree bark, spend the time working on their underground network of burrows. These activities take up half their lives. They spend the other half asleep. (p. 21) 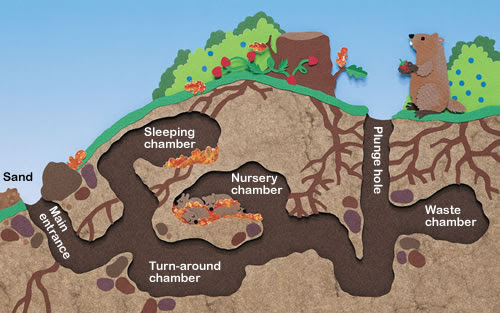 He goes on to explain how “winter in the northern hemisphere can mean sparse pickings” for a plant eater like the groundhog, hence they have evolved, like many other mammals, to hibernate through the colder months because that’s “better than retiring hungry every night and a lot less work than migrating”—and here’s where Stutz is just rude—“especially if you’re a lumpy creature with stubby legs.”

Then Stutz provides a lengthy explanation about the hormone melatonin. The short version is this: it’s produced by the pineal gland, children have higher levels of it than adults, its production is affected by the presence of light, and production of melatonin regulates our sleep cycle and is produced in an inverse ratio to the production of sex hormones. Arendt and Skene (2005) explain in Sleep Medicine Reviews,

Melatonin, hormone of the pineal gland, is concerned with biological timing. It is secreted at night in all species and in ourselves is thereby associated with sleep, lowered core body temperature, and other night time events. The period of melatonin secretion has been described as ‘biological night’. Its main function in mammals is to ‘transduce’ information about the length of the night, for the organisation of daylength dependent changes, such as reproductive competence. (taken from the Abstract to their article, “Melatonin as a chronobiotic”)

The avian reproductive cycle, which is how a hen produces eggs, is stimulated in poultry by increasing day length. As day length approaches 14 hours per day during early spring, chickens begin laying eggs, gradually increasing their production as the day length increases. They will reach their maximum egg laying potential when the day-light reaches approximately 16 hours per day. Nature utilizes this characteristic so that chicks will hatch in the spring and have the warmer months of summer and fall to mature before the harsher winter season arrives. By providing artificial light, growers can manipulate this natural cycle to their advantage and increase the egg laying potential of their flocks.

As mentioned above, approximately 14 hours of light per day is required to stimulate a hen to lay an egg. Anything below that will cause her reproductive cycle to shut down, triggering the hen to cease egg production until spring when the natural day length will increase to sufficient levels once again. Artificial light needs to be applied when the day length approaches 15 hours per day; which happens in September. Any supplemental light should be added during the morning hours, as sudden darkness can cause chickens to panic and pile up in a corner, which can consequently cause them to suffocate each other. By applying extra light in the morning rather than the evening, chickens will naturally go to roost with the setting of the sun.

Stutz (2006) explains further about melatonin in terms of the groundhog:

As summer and light wane, the groundhog’s pineal is on and producing melatonin longer than it’s off. At a certain point, with food resources dwindling and already having fattened themselves to bursting among your plants and vegetables, the groundhog feels it’s just not worth staying awake for those few hours of light each day. Besides which, the increased melatonin has depressed their sex drive (in the same way it staves off human puberty). So sometime in the late fall they wallow down their burrow and hibernate. It is no ordinary hibernation. Compared with groundhogs, bears are light sleepers. A hibernating bear’s body temperature may go down a few degrees. A groundhog’s body temperature drops to near freezing and its heart rate falls from 75 to 4 beats per minute…

A few times during the winter, groundhogs revive, have a look around, and return to their burrows until they awaken for good come spring. The question, of course, is if the groundhog lies asleep in its burrow and not in a cage in the Punxsutawney Public Library [where the real Punxsutawney Phil lives], and light can’t penetrate through to the burrow, how does the lengthening day affect their pineal and its production of melatonin? (p. 22-3).

I must interrupt here because it occurs to me that the prognosticating groundhogs that have their big public festivities on Groundhog Day—like Punxsutawney Phil or Woodstock Willie—should not be readily available at the beck and call of folks like the Inner Circle Committee in Punxsutawney or Inner Square Committee in Woodstock. But, since they don’t live in the wild, I suppose they can probably be manipulated into being “available” with a change in their lighting. Of course, if Stutz is correct in this next bit, maybe that actually wouldn’t work too well. To be fair, Woodstock Willie did not seem very happy—screaming as he was—about being pulled out of his stump on this recently past Groundhog Day morning.

The answer seems to be the genetic switches that turn the pineal on and off have somehow “memorized” the year’s cycle of light and dark. Sometime in early spring the melatonin stops flowing. When it does the groundhog’s level of gonadal hormones—testosterone—increases. He or she awakens, aroused by a kind of spring adolescence that also sets birds singing, frogs calling—

Interrupting to mention that Imbolc, the Gaelic festival the coincides approximately with Groundhog Day, gets its name from i mbolg meaning “in the belly,” linking it to ewes’ lambing season.

…and perhaps our own thoughts turning lightly to love [the commercial omnipresence of Valentine’s Day décor and products notwithstanding]. To appreciate the goings-on in Punxsutawney, you have to think of the groundhog as a sex god promising fertility.

”The general explanation which we have been led to adopt of these and many similar ceremonies,” writes Frazer [(1922)], “is that they are, or were in their origin, magical rites intended to ensure the revival of nature in spring.” The roots of a celebration around the reappearance of a hibernating animal go back to northern Europe. The Germans, who immigrated here and settled in Pennsylvania, brought the ritual with them. The faithful have been making the pilgrimage to Punxsutawney since 1887. (p. 23)

I have not been to Punxsutawney. But, I am not “faithful” to Groundhog Day but Groundhog Day. Hence, my trip to Woodstock this past February.

Today’s reason to repeat a day forever: to not have to worry about sleep cycles, and maybe never sleep again.