you haven't worked with her yet

Just watched Meatballs. Tripper Harrison is like my idol.

Jumping right from Meatballs to Groundhog Day is interesting because the latter is some 14 years later and the style of comedy, not to mention the levels of Bill Murray's performance, is so very different. And, I like that Murray's character in the former is almost seeking attachment as much as his character in the latter is trying to avoid it. Of course, his romantic approach is not too different between the two. He starts out overbearing and eventually calms down enough to earn some actual attention and affection.

But we are not gathered here today to talk about Meatballs, even if it does star Bill Murray and was co-written by Harold Ramis. Dearly beloved, we gather here today to pay our, well, probably disrespects to Julie Ellen Benesh. I should probably be more polite; I mean, she only wrote the dissertation a few years ago and I should email her or something. We could team up on something.

I should also call Bill Murray's number already as well. I am fairly sure I have discovered the number by which one reaches him... or tries to reach him. He quite famously has no proper agent but a voicemail instead. And, if a message grabs his attention, then and only then will he maybe look into whatever project is being proposed.

Oh, one other thing before I get to Benesh again. Last night, someone whose opinions I respect said of this project, "It's really admirable what you're doing. Not to mention, super interesting. These are the kinds of things people should read." So, I got that going for me.

Now, on to Benesh.

Bottom of page 8, I highlighted the following (which I believe I've quoted before, at least in part):

...during the film the audience members "introject" or take in its psychic content including symbols, images, and narrative, as well as projecting individual personal concerns. After the film, if it is particularly "resonant," the process continues as the film "plays on" in the viewer's mind. A personal "edition" of the film is thus created and is assimilated into the psyche of the viewer.

This is the kind of stuff that is quite obvious to me, but it's still nice to see it spelled out like this. I've taken in so many movies in my life, built my own editions of them in my mind, incorporated so many lines of dialogue into regular conversation--a practice that goes right over the heads of most people I know, mind you. I think there's a lot of back-and-forth actually, between the audience and film (not a film, singular, but film, generally). That's why we get similar films timed together, stuff like Deep Impact and Armageddon, Volcano and Dante's Peak. I don't just mean the cheap knockoffs that go directly to video or to cable television... although, to be fair, some of those copycat films may actually be copycats, built on an idea from some rejected script for another film. But, my point is about something bigger than that. When we're at war we get movies that tie into our national psyche and the scars left by war. There are concrete villains, often very specific (unlike the faceless enemy we might be fighting in reality), because then we can all get our hate on like it's Emmanuel Goldstein. When we're at peace, things get more abstract. Or they just don't work as well. Even our individual heroes change over time--I wrote a speech about it a few years back; you can read a version of that speech here. The zeitgeist shifts and so do our interests, the things that make us laugh, the things that make us cry.

It occurs to me that Bill Murray didn't mature as an actor (as did his character choices) simply because he was getting older and was outgrowing the behaviors of the likes of Tripper Harrison and Carl Spackler and John Winger and Peter Venkman and Phil Connors (and, note, I think even those characters are a little more mature from one to the next, and aside from maybe Carl Spackler, they each mature a bit as they go (though it takes Venkman two films to do so)). No, it wasn't just Murray's personal choice or his natural maturation as an actor. Rather, I think it was just as important that his audience was growing and getting older as well. Sure, kids can still discover old movies--my 14-year-old son recently watched Caddyshack for the first time and tonight watched Meatballs with me--but the American film audience moves on, like an entity unto itself, getting older and wanting something different.

(Not, always something different though, as sequels and remakes abound from time to time. But, those come from, to varying degrees, nostalgia, cynicism (on the part of studios), and occasionally legitimate stories to continue or tell anew. But, to discuss that now would be taking a tangent even farther away from where I'm supposed to be right now.)

There's a yellow tab on page 14 of Benesh. She's in the middle of listing and describing Bruner's (1991) ten characteristics of narrative (the list starts on page 12 and ends on page 15). On page 13, I've got a highlight at the end of characteristic #2--"Particularity." The line that's highlighted: "...yet his situation has many elements of near-universal familiarity to any viewer, as pointed out by Gilbey (2004, p. 91)." Since I've got Gilbey on my Groundhog Day Project shelf, I can share the original bit that Benesh is referencing here... Well, I could, except page 91 of Gilbey is in his "Notes" section and doesn't contain the line Benesh is trying to cite. The thing is, I remember some writer I've got in one of my Groundhog Day Project binders (if it's not Gilbey, just on another page) having a good line about how Phil Connors, despite his situation, or rather because of it (which I have argued more than once before), is someone we can all relate to. We all understand the day-to-day events that seem so damn repetitive that sometimes we just want to scream, the lonely existence that makes us yearn for companionship, even those moments where we know more than everyone else around us does and we can grin like the Cheshire Cat or open our mouths to show off what we know, and sometimes that makes us look like a know-it-all asshole, sometimes it makes us look like a genius. The time loop classifies this film quite readily as fantasy, but Phil Connor's story is a lot more down-to-earth than many another film. It just is. 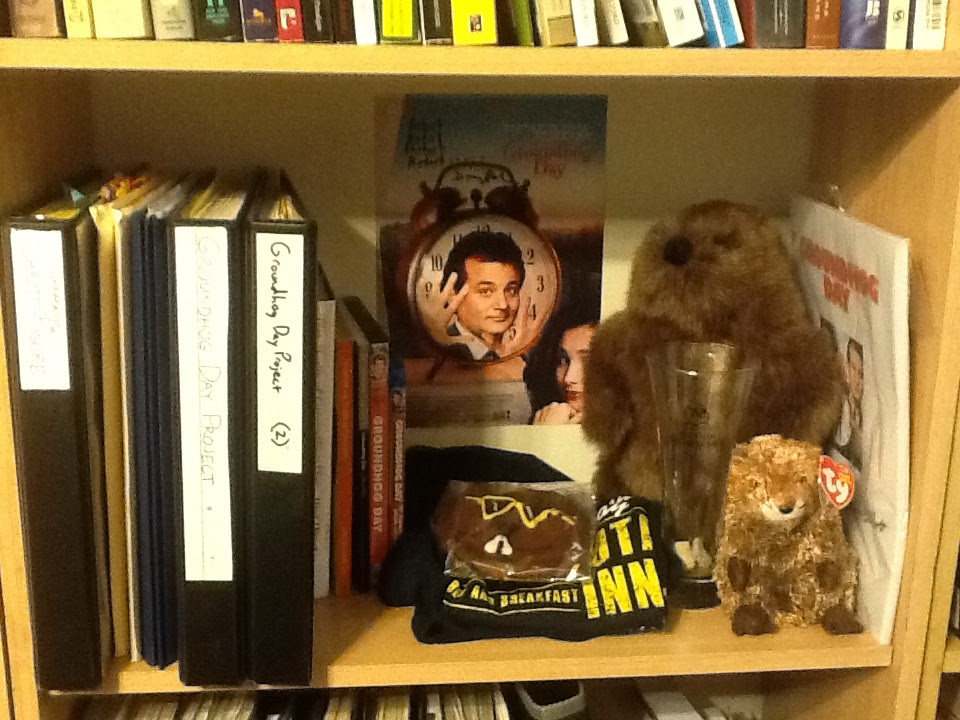 On page 14, I've got a line highlighted at the end of characteristic #5--"Canonicity and breach." Benesh explains what this is like this: "Stories are about the exception that somehow proves the rule, such as disruption of routine. In Phil Connor's case, this may also be seen as the routine in the disruption. That's all highlighted and the yellow tab at the side of the page is labeled "routine in disruption." This fits right in with what I was just saying about how we can relate to Phil Connor's situation. We yearn for the disruption because it allows us to transcend the mundane. Phil, oddly enough, ends up seeking out the more mundane because disruption, when it becomes regular, is not disruptive anymore.

Also on that page, I've got a line highlighted at the end of characteristic #8--"Normativeness." The line: "Critics agree that the moral of Groundhog Day is clear--but just what that moral is, is rather different, depending on whom you ask."

And, I suppose I don't need to elaborate on every single highlight, but the next one is fairly big, a lengthy quotation highlighted, and a box drawn around most of page 16 and part of page 17, plus a yellow tab labeled "monomyth." Benesh writes:

A hero ventures forth from the world of common day into a region of supernatural wonder: fabulous forces are there encountered and a decisive victory is won: the hero comes back from his mysterious adventure with the power to bestow boons on his fellow man. (original italics, p. 30). (Benesh, 2011, p. 16)

Some of those boons: a fresh tire, Wrestlemania tickets, even Debbie's passion for Fred. And, recall these details from my discussion of the cinematic Christ-Figure (or go read it now if you haven't already, here and here for the primary bits):

Daughton (1996), sees Phil Connors's transformation as the gradual integration of super ordinate and normally competing orientations of agency and communion. Phil Connors, out of desperation, becomes more communal by embracing feminine values and qualities and, in so doing, achieves his original agency-inspired goals--and then some. (Benesh, 2011, p. 20-1)

Maybe I'm getting less cynical, or maybe I've just had more time to think about it, but I disagree with Daughton about the desperation bit. Sure, I can still be cynical sometimes and say Phil only does good because he ran out of bad. But, I don't think that's it, really. And, I think Groundhog Day must be necessarily understood as Phil choosing to do good, consciously, deliberately, because that is another reason we all relate to it. We all want to do good. We all want to be better people than we are. Given our own time loop, I'm sure we'd all even manage eventually to be what we yearn to be. Benesh continues:

Daughton (1996) identifies seven steps toward Phil's "transcendence": (1) "cynicism," (2) "alarm," (3) "hedonism," (4) "depression and anger," (5) "denial and avoidance," (6) "resignation," and (7) "acceptance and growth" (p. 145-149). She likens these steps to Kubler-Ross's stages of death and dying which are denial, isolation, anger, bargaining, depression, and acceptance (p. 151). Kubler-Ross is also mentioned by Harold Ramis in the DVD's Director's Commentary, and the steps are also similar to the Gestalt Cycle of Experience (Wheeler, 1998) which will be discussed later, in that each step in the process can be seen as an incremental mini-transformation and a fractal that reflects the whole, overarching transformation. (Benesh, 2011, p. 21)

It has been a while since I've actually read Daughton. Her piece, "The Spiritual Power of Repetitive Form: Steps Toward Transcendence in Groundhog Day is right at the beginning of Groundhog Day Project Binder #1. I actually didn't remember her for that list of steps but rather for her linking of Phil Connors within the time loop to "the economically disenfranchised, the Other" (Daughton, 1996, p. 146). I may have to read Daughton again, and maybe brush up on my Kubler-Ross for a bit of a tangent tomorrow. For a) it is late and the film is ending, b) this entry is well over 2000 words already, and finally, c) I've been asked about the film's connection to Kubler-Ross by a friend, a guy I met in Woodstock, and by the reporter from New York (who I also met in Woodstock). I suppose it's time for Kubler-Ross by way of Daughton by way of Benesh by way of, of course, Groundhog Day.

Today's reason to repeat a day forever: to learn all of the lists that people use to classify stuff and bug the crap out of everyone around me by classifying every little thing they do in terms of philosophers and psychologists and scientists and, well, whatever else comes up.