I wanted to write about masculinity and identity--Woody's and Buzz's conflicted relationship as a sort of testosterone-fueled contest, who can more fully fill the role of man. I wanted to tie this back into identity and how Buzz being all alpha male even when he doesn't really know who he is effectively reifies a notion that all is nature... and I wondered if that was reassuring or damaging. Or if I actually do read too much into things sometimes...

Meanwhile, I just paused to check the photos on the wall by the stairs in the Davis household. I didn't see any picture of a couple. Nor on the mantle. Andy's mother is inexplicably single... And, that sounds like it's shocking or unusual, but I meant, literally, we are not offered explanation. Anyway, I noted out loud that there's a theory that Andy's father has died (Actually, the theory is about he and Andy's mom going through a divorce but I guess I conflated the two ideas in my head... but don't read anything into that.) and that's why they are moving; they don't need so much space anymore. I pointed out that there's no reason to assume such a thing... and there isn't. And, Saer says to me, "That's not your job. You're supposed to make it seem like it matters, because you overanalyze stuff."

I don't think I overanalyze things. I think I analyze things just as much as they need to be analyzed... until I run out of time. This seven-day-per-film system means sometimes I don't have enough time to cover everything... I'm reminded of Gandalf's line--"A wizard is never late, nor is he early. He arrives precisely when he means to." That's how I analyze stuff, analyze movies; I don't overanalyze, nor do I underanalyze. I analyze precisely how much I mean to. 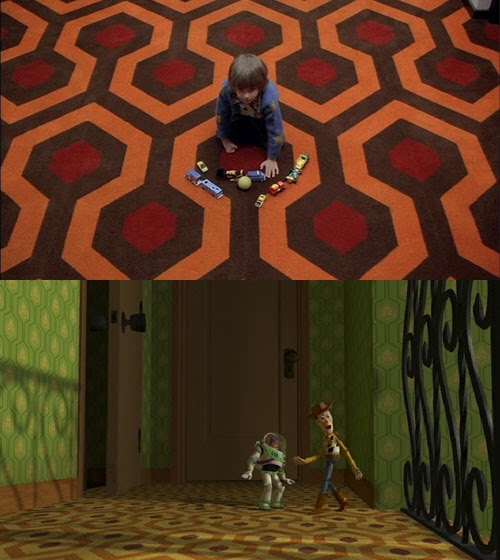 That carpeting, for example. Yes, it was apparently copied out of The Shining (and there are other references to The Shining in the sequels), but does that mean that there's some specific allusion going on other than the visual? The Shining--and I mean the Stanley Kubrick version, specifically--is about an abusive alcoholic father who moves with his wife and kid to a mountain hotel in the off season, ostensibly to write a novel while serving as caretaker. But, the hotel is haunted and feeds on his weaknesses, eventually driving him to homicide. The story beats are mostly the same in the novel. But, none of these beats is here... unless we're supposed to see Andy and his mother as Wendy and Danny Torrance (Danny and Andy even share the same letters), maybe having taken on assumed names after killing Jack at the Overlook. (Buzz's turn as Mrs. Nesbit could be a clue into the altered names.) But, what does that mean for this story? I don't think that Sid's toys are ghosts. Can it simply be that the carpet is supposed to link into the horror atmosphere that Woody and Buzz experience, at least initially, at Sid's?

(Andy's mom being Wendy does get in the way of the theory that she's Emily from Toy Story 2 all grown up, but this link outside the Toy Story films might be more interesting.)

In The Shining--the novel (and the TV miniseries version), not the Kubrick version, there are topiary animals that move when you are not looking at them, just like the toys here. Perhaps it is just as basic as that--somebody involved in the production here thought of those topiary animals and they needed a pattern for the carpet, so they went with that one. There are some interesting pattern choices elsewhere in the film (the wallpaper with the ducks in the room where Sid's dad is asleep with the TV on, for example).

Or maybe the toys move just like those topiary animals move. Those animals were only (apparently) evil for the same reason that Jack Torrance turned homicidal--the Overlook's malevolent influence. I assume that any toys (in the universe of Toy Story) that get dragged to the Overlook Hotel (assuming it was rebuilt after the fire) turn on their owners and try to kill them. Hell, Sid might not realize it but he may be doing a service for the rest of us, defending the world from potentially homicidal toys.

Jack Torrance--his story also could work as an in for a blog entry on masculinity. He's supposed to be this good father but he has weaknesses he cannot control. The question is, what is masculine, what makes him a man? Taking care of his wife and son or demonstrating power over them any anyone else, even if it has to be violently? And here, assuming Andy's father has recently left (or died), we can imagine that Andy is having a hard time dealing with it. Maybe Woody reminds him of his dad, who got him interested in cowboys. (Dismissing the aforementioned Emily theory, of course.) Andy needs a newer, shinier, fancier toy to help him get on with his life--and it's all subconscious, of course. Woody's need to remain in Andy's life becomes a sort of synecdoche for everything Andy's father ever was for Andy. (And, we get into some Freudian film analysis, with Andy (Buzz Lightyear being his proxy) has to "kill" the father to be in charge of his own life. Woody, then, is the father. And, by sticking around, by fighting so hard to be in Andy's life, he's just keeping the memory around. Andy cannot move on.

Hell, whatever happened to Andy's father, maybe his mother has been dating. Buzz, then, is the interloping new lover who Andy has to accept and embrace to get past the grief of losing his father. Essentially, every bit of conflict between the other toys and Woody becomes representative of Andy's psychological struggle. Maybe the entire film is really just happening in Andy's head as he deals with moving and with moving on.