discrepancies in the stories

Let us just get this out of the way on this Day Two with Stories We Tell. SPOILERS ahead, of course. Not that you would normally think of a documentary as having SPOILERS even be a possible thing.

So, Stories We Tell is built of multiple interviews about Diane Polley, director Sarah Polley's mother, and a whole lot of amateur footage of her--Michael Polley explains early on that he bought a camera around the time they met and took to filming much of their lives. Before we get to the big SPOILER, I offer this critique of the film's overall structure from Harry Gulkin, who it turns out is Sarah Polley's biological father--that is not the twist, but it is a notable turn in the course of the story here. Asked what he thinks of giving equal weight to everyone's version of the story, he replies:

I don't like it. I think that it takes us into... into a very wooly... You can't ever touch bottom with anything then. We're all over the place. I think they can all be heard. It's giving them equal weight which I find... Particularly those who are non-players. First of all, there are the parties to an incident, those who were there and who were directly affected by it.

As he says this, the film cycles through shots of those credited in the end as "storytellers." Here, we see Harry and Michael.

Then there is a circle around that of people who were affected tangentially because of their relationship to the principal parties.

And then there's another concentric circle further out there, which basically has heard or been told by one of the principal players about it...

We see various relatives and family friends who have had a little bit to add the story throughout the film.

...and all of these may have different narratives, and these narratives are shaped in part by their relationship to the person who told it to them and by the events. One does not get the truth simply by hearing what their reactions are.

It is clear already that Harry believes that his version is closer to, if not the, truth. At this point in the narrative of the film, Harry has written his own version of the story that he wants to publish. Meanwhile, Sarah has apparently convinced a reporter not to publish a story about how she found her biological father because she had not yet told Michael, the father she has known her entire life, that she has reason to believe he is not her father, let alone that she has been looking for the other. In voiceover, Sarah explains the train of thought that would eventually lead her to make this documentary and which made her not want Harry to tell the story. Harry continues:

His next lines seem to be intended as a critique of what Polley is doing with her film, but ultimately express the exact purpose thereof instead. He continues:

The crucial function of art is to tell the truth, to find the truth in a situation. That's what it's about.

You can certainly get very close to [the truth], but you have to limit it to those who are involved in the events... directly involved and affected... and the direct witnesses to the events are only two, and one is not around. Diane's not here to talk to. That's really the person who could provide the essence, the essentials of what took place... The reality is, essentially, that the story with Diane, I regret to say, is only mine to tell, and I think that's a fact.

Harry assumes that only he can tell the story of his love affair with Diane, which he also implies is the heart of Diane's larger story. Different truths, indeed; Diane's daughter Joanna, Sarah's sister, later suggests that Diane was always in love with Michael, Michael was simply unable to return her affection as she wanted it. But, the personal elements are not the point, here. If you want to hear all the personal details of the story, watch the film. What I am interested in today is this idea that there is any one version of any story, or any one person who can tell it.

That there is a singular truth to any story like this... No, that is, in fact, the very point of Stories We Tell--that the truth is not singular but collective. The truth that matters, anyway. What Harry remembers, what Michael remembers, what John and Mark and Joanna and Susy remember, what any of the "storytellers" remember--these are all just pieces of the truth. As Harry explains, each is affected by his or here relationship with the subject; each truth is subjective. But, that does not make them untrue. What the home videos show--that might be objective, but... 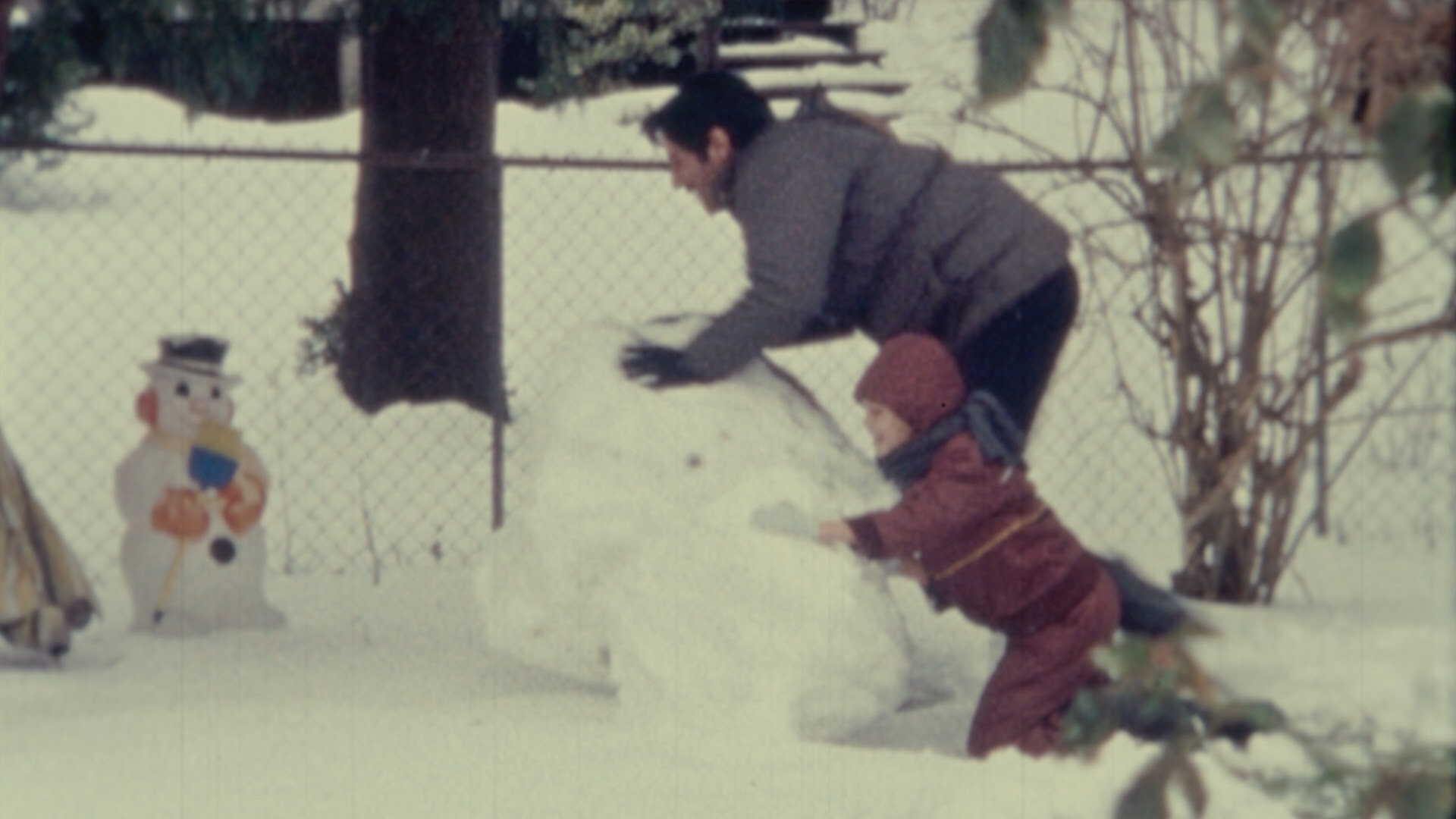 Here's the thing. As you watch Stories We Tell for the first time, if you get into it, if you are enjoying the way the story unravels, you don't notice some key detail. Michael's explanation early on about purchasing a camera sets up the idea that there will be a lot of home videos. So, when the old footage ventures away from the home, away from Michael even, you might not notice that some of these scenes have got to be reenactments. And, you could, in retrospect, go back and try to weed out which footage is genuine and which is not, but the film offers up two conclusions that keep me, at least, from bothering. 1) a scene late in the film that reveals Sarah Polley directing what is clearly a piece of "old footage" actually suggests that, barring some amazing casting at least on the part of Diane, every piece of home footage may be fake but 2) so what? Really, the twist comes down to the very structure of the documentary, the use of reenacted footage not only without telling the audience but deliberately leading the audience to accept it all as quite real. I remember when I first saw Stories We Tell in the theater, think within the course of that single scene that it was a bit dishonest to present so much footage when it could all very well be fake, then almost immediately appreciating the sense of storytelling this approach offers. The film lies to us. In order to get at the truth.

Many a documentary does, really, though not always to such an extent.

Now, I've seen discussions online about which footage might be genuine and which is not, but I think distinguishing the two is ultimately irrelevant. If it all is fake, or if some of it is actually real, it still tells the same story. Reenactment is just another version of the same story--Sarah's version. There are clear reenactments of parts of the "present"--Sarah learning from Harry that he is her father or Sarah telling Michael that he is not, for two examples. There is actually a strange instance before Sarah finds Harry, when she thinks her biological father might be a stage actor named Geoff Bowes. At some point in the "past" Sarah went to meet him, and she is, in the "present" filming an interview with him for this film. In the interview he talks about meeting her in the past tense, but then she asks him about his relationship with her mother, as if it is a new question, but if it is a new question, then their initial meeting would have been very slight. Watching the film again, there is something a little off about how the topic seems new when the very pretense to this second, filmed conversation would have to be to recap this very topic from the previous conversation.

(Interestingly, the last bit of the film comes back briefly to Geoff Bowes as he admits that he had sex with Diane once, which suggest an entire chapter to this story that was excluded; surely, unless the timing was completely wrong for him to be Sarah's father--a detail easily mentioned in the film--surely, Sarah would have talked to him more and maybe even gone ahead with a DNA test with him before she ever got to Harry. That there is something (deliberately) left out makes this even more... real. We miss out on elements of the lives of those around us all the time.

In terms of documentaries, it reminds me of Capturing the Friedmans, a feature-length documentary dealing with one family caught up by accusations of sexual abuse that arose spontaneously during production of a planned documentary short about child birthday performers. Tangents can turn into something quite large sometimes. Harry seems stuck on the idea that the story of his love affair with Diane is the heart of the larger story. But, what might Geoff think of his affair with Diane?)

As the camera reveals Sarah Polley directing a reenactment--and the only reason for that second camera to be there, making that movement in that instance is to make this revelation--Polley herself recites in voiceover a letter to Harry about her interest in the way stories differ. She says,

I'm interested in the way we tell stories about our lives, about the fact that the truth about the past is often ephemeral and difficult to pin down, and many of our stories, when we don't take proper time to do research about our pasts, which is almost always the case, end up with shifts and fictions in them, mostly unintended.

The timing of it is this: we see the camera at the edge of the screen at the word "fictions" and we see Polley directing the scene as she finishes "unintended." She's playing with the usual levels we might see in a documentary to tell a larger story about the way we tell stories. Just after this, JoannaPolley offers this (as we see more behind-the-scenes footage of "past" characters having their make up applied):

...there's this misconception that there is a state of affairs or a thing that actually happened, and we have to reconstruct exactly what happened in the past, and I don't think there ever was a "what actually happened." I think there were lots of perspectives from the very beginning. You don't ever get to an answer. You don't ever get to, "Okay, now we've figured it out. We know exactly what happened. We know exactly what kind of person she was." I think those things are just illusory.

Of course they are. That is why sometimes, fiction tells the truth far better than any nonfiction can. Truth shows up between the lines. Whether those lines are facts or not is secondary.