before you i had no idea who i was

At the end of yesterday's entry, I noted how in the Him version of the story Conor says that Cody had his eyes, and in the Her version of the story (by way of Them), he says Cody had Eleanor's eyes. That got me to thinking about this sort of claim to ownership that comes with describing one's child in terms of the attributes he has taken from you.

And, already, I want to take back phrasing. Ownership is not quite it. It's something more like a belonging, something like a legacy or a bloodline belongs to you. It is not, necessarily, proprietary. Obviously, there's a genetic component to it. We are naturally inclined (generally speaking) to procreate. We are evolutionarily inclined to put our genes out there into the next generation, and of course we are also inclined to be protective of those genes. And, how do we know they are ours? I mean without going on Maury. We recognize in the resulting child something of ourselves.

But, there is something much more important, I think. We recognize in ourselves something of the child. It is not simply some one-way genetic street.

Take the ideal relationship, especially by way of Hollywood. One person and one person become one couple. Identities become twisted up in one another. One is defined by the other. One is part of the other. The same thing works for parents and children.

(For the record, I'm not one to normally romanticize the notions of parenthood, like how having a child changes you, and you never know your capacity for love until you have a child. I don't remember who said that last one. I think it was in a movie. And, generally speaking, I take such a statement more as evidence of a lack of imagination than some great measure of what it means to be a parent.

Or maybe I'm just strange. Like, I'm the unusual one because I'm not sentimental about being a parent. Not most of the time, anyway. Still, I think being a parent does change you, just not in some dramatic, all encompassing, immediate way. But, yeah, it redefines who you are in the world as it offers up new responsibilities and new potential perspectives on the world at large. Maybe, if you didn't care about the larger world before, you have more reason to care once you have a child. Personally, I think you should have been invested more before if that's the case, but again, maybe I'm just strange. An unsentimental bastard.)

One is defined by the other. Father and son, father and daughter, mother and son, mother and daughter. We expect these relationships to fit certain descriptors. Increasingly, those descriptors can be mixed and matched as society progresses, but still, we expect parent and child to have a connection of some sort, for one to care about the other, for one to protect the other when it comes down to it, for one to be heartbroken when the other is in pain. The same sorts of things we expect, but in different varietals, between father and mother, father and father, mother and mother, or what have you. It doesn't have to be cheesy--Conor just told Eleanor, "You're the star of my life story." It doesn't need to be that. But, obviously, the singular individual is changed by being part of a something plural. The longer the plural lasts, in fact, the more synapses rewire and the change becomes something fundamental to one's being...

But, also, I am not inclined to be personal right now. Not inclined to explain how much my life changed when I met my wife, how much it changed again when we separated. Not inclined to explain how much my life changed when my children came into my life, how much my life felt broken and incomplete when I didn't see them as much as I wanted to for a while there. See, that's why we need fiction. That's why I need Conor and Eleanor and Cody. So I can project onto them my feelings, identify with and connect with them and be inside their story instead of my own because just typing those couple sentences just now about my life changing made me sad. It's not that the present is particularly sad but some wounds--and here I guess I can manage sentimentality--never fully heal. Some fears, once imagined, can never be forgotten.

It works the same way in a positive direction, too, of course. Some love, even when lost, leaves a mark. Or leaves a hole. If there's a difference. In a performance piece last year I said that sometimes I feel like I have a human-size hole in me. What I didn't say was that other times, the hole is like the faintest of echoes, drowned out by the cacophony of the present. To mix several metaphors. 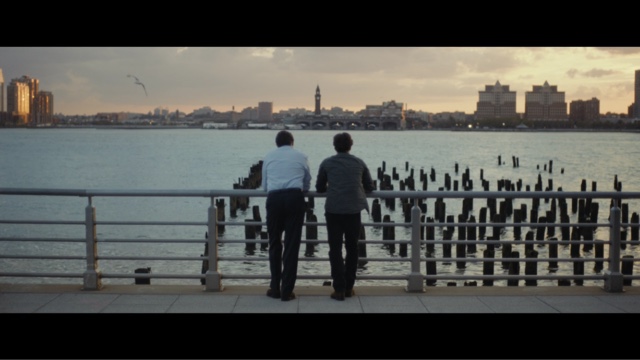 In my master's thesis, I take the idea of a blog as a sort of public diary, a metanarrative made available for potential eyes, something personal put into existence for others. And, the larger idea, the big beautiful idea, is that by writing such a thing, I did, and others can, rebuild and refurbish my self when it was low. It doesn't have to be writing, of course. It could be taking classes. It could be running a restaurant. It could be anything. Find the right role to fill and you can redefine who you are to, perhaps, fix some of the cracks, heal some of the scars, replace them... Fill them with something new that changes who you are. Like getting into a new romantic relationship, or making a new friend, or having a child... Or just getting a particular job. If it lasts, if it alters your behaviour and the way you think about yourself, then it can eventually---

Nice timing note: Conor just asked his father, "Seriously, what the fuck are you talking about?"

My point is this: change doesn't have to be accidental or incidental. It can be deliberate. And it can be wonderful. Becoming a husband or a wife, or simply a lover, becoming a parent, becoming a best friend--these things do change you. And, over time, that change can become something like permanent. Ideally, such things make you care more, make you empathetic. (Watching movies can do that, too. And, that's not just me saying so. There's a study.) All of these roles mean taking some responsibility for and making some investment in someone else. If reciprocated, it can be a beautiful thing. Worth being sentimental about, even when you're not usually too sentimental.