(Starting the blog entry a while before the movie today. Sitting in a hotel room in Florida, brought my Fire Stick on the trip to have access on the room's TV to Hulu, Amazon, HBO and Netflix. The modern Western world--am I right?

Anyway, long day, with a little sleep on the plane and a bit of a nap here at the hotel before dinner. About to judge some practice rounds with our students, give them some last minute notes for this weekend's competition. In the meantime...)

Swingers is all about that scene, the answering machine sequence. Like the Groundhog Day Project is all about sharing and nitpicking and being who you gotta be... No, being who you want to be. Like our speech competitions are all about finding the piece that fits you, and you it, and figuring out how to put it to the audience in the best way you can. And, all that may sound a little generic, a little obvious, but I suppose that's on purpose. As I've stated before, the thesis of this blog, if there is one singular point to all of this, is: "our lives can be measured in movies and movies in our lives and profound and profane depths can be found in the intersection thereof." Not just at a literal Fever Pitch kind of level but also inasmuch as (most) any given film is of its time and its place, and what we (as a population) choose to watch and celebrate can measure the whole of us as much as our individual viewing choices can measure who we are individually.

In terms of Swingers, it's about a bunch of individuals who are self-centered, hard-to-impress and leaning (sometimes too much) toward misogyny. But, even if we are not like them, we can understand who they are, why they are the way they are--especially if we were around in the mid-90s when these kind of guys were a thing... not to imply that such men don't still exist, but this particular collection of personality traits is very mid-90s, very Hollywood club scene, and if I were offering up lists of movies to define particular decades, Swingers would definitely make the 90s list. 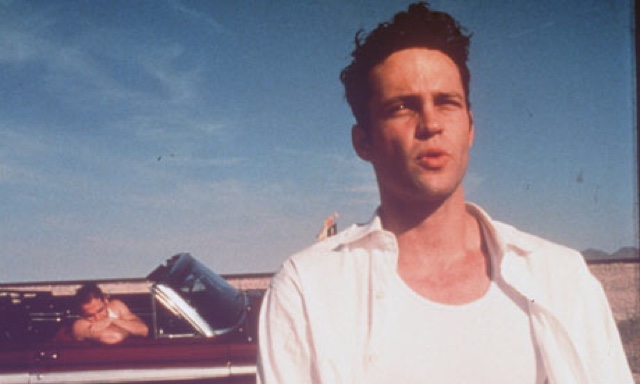 This movie is quite dependent on location--the third-rate casino, mobile home the airstream camper, Mike's barely furnished apartment (which was Jon Favreau's actual apartment at the time), Sue's much more lived-in apartment, the various clubs (e.g. Dresden) and diners. And, this movie manages, with little effort (like filming without permits at least some of the time) to offer some very real background characters. Like this casino waitress--Christy (Deena Martin)--with only a handful of lines, and disappearing from the film entirely after the first act, manages to come across as a real person, a lived-in character. Part of this, of course, is that most of the background characters are really just background people. The parties were actual parties, the bars actual bars, filmed during operating hours.

That should be obvious.

Meanwhile, the blog is the blog wherever I am, and movies are movies, but travel is tiring. Haven't written nearly as much tonight as I thought I might.