sucking every bit of life

Damn, no Rom-Com opening. Just, straight to the bridge. This film is going to just go all dark (while, oddly being entirely lighter and more colourful than Him).

This is The Disappearance of Eleanor Rigby.

Ooh, no Conor at the hospital at all. This version of the movie is like, you know that bullshit of the other film. Put that behind you. We are moving on.

A bit more with Eleanor and Katy as they leave the hospital.

Eleanor tells Katy she can say anything she wants. I want her to says, "Velociraptor broccoli." Does that mean I'm weird?)

Weird question, maybe: Mary says she closed Eleanor's wifi account. I assumed before that she meant the account at the apartment Eleanor and Conor shared, but that doesn't make sense. As far as Mary knows, Conor is still living there. Which means she has to be referring to some past wifi account in this house. Which mattered, what, a couple years ago at the most recent? So, 1) they have no wifi, which makes Mary and Julian seem very... antiquated, and 2) it's been at least a couple years; did you really think Eleanor assumed, especially after she just got out of the hospital and probably is not thinking of such things, that the old wifi was exactly the same?

More of Eleanor and Julian, a scene at the train station that wasn't in Them.

I like the framing here of Eleanor walking around town, a little paranoid about someone following her but not seeing Conor.

Different scene between Eleanor and Mary. Then, Eleanor in the bath talking to Katy. A) eating ice cream in the bathtub is... I want to say weird but it keeps coming out "awesome." B) the film established that Katy works in a library so that later scene where Eleanor surprises her at work is less out-of-nowhere.

Then, they go to see some friend--Charlie (Katherine Waterston)--Eleanor gets bitchy and Charlie apologizes. 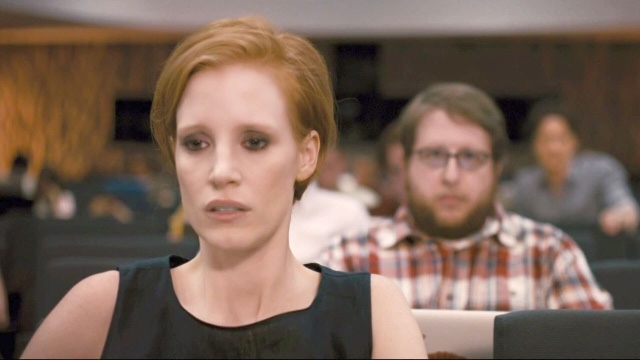 Note-passing scene is framed differently. Of course. But, more interesting, Lillian is giving a different lecture... and I don't know what it is because I got lost in the search. I searched the new lines--

--to no avail, I thought at first. But it's just a slightly different wording. Viola Davis saying the lines from memory instead of reading off the source. (Didn't notice the lecture was basically the same lines, at first.) I searched the old lines to see if these lines were part of that same piece. (They are the same piece, but a different take.) And, I noticed something, and it seemed strangely personal. Arciero and Bondolfi (2009) are talking about me...

Just a couple lines beyond what Lillian says in the classroom scene:

But Robert's case presents us with a strange dilemma. Robert loses his sense of Self, he disappears as a person, when Sarah leaves him.

In case this is your first time at the Groundhog Day Project, my name is Robert. My ex-wife (once the paperwork is finalized) is named Sarah.(Meanwhile, Lillain shows up after the hit-by-the-car bit.) Arciero and Bondolfi continue:

He thus possesses a discontinuous sense of Self, which comes into being only though the presence of the other and which disappears when the other disappears. Being alone "in one's own head', dialogue with oneself without the other, corresponds to the loss of meaning, to the dissolution of the sense of Self. Naturally, when dealing with experiences of this nature, a chorus of voices is raised by those who question the very existence of the Self understood as a self-contains individual, which modernity has recognized as a subject.

They're writing my story. (Meanwhile, Eleanor and Katy wrestle before Eleanor talks to her father about the other therapist being at the house.) My story (by way of my master's thesis in progress) is that I blog because my self was in need of order. I recreated and reified who I was by writing myself into existence anew, by watching and writing about Groundog Day for 365 days, then a bunch of other movies, a week at a time, then whatever the hell you'd call this year, the free-for-all approach that both negates and justifies my argument that this blog is somehow an exercise in my own creation of self. (And, I should probably quote that line in my thesis, and quote this parenthetical as a sidebar.)

(Sidenote: Lillian mentions Ken Bergen, but that is either a mistake on Viola Davis' part or Ned Benson's writing. Arciero and Bondolfi reference Ken Gergen, and it is their line that Lillian is quoting when she cites "the most authoritative voice in this chorus." No wonder I couldn't find Ken Bergen. He doesn't exist.)

Nice extra dialogue as Katy gets ready for her date. Turns out Katy used to be an actress. And, Eleanor eyes Cody's clothes in the closet after she hugs Katy in the mirror. But, I was stuck on Arciero and Bondolfi... (As Eleanor sees the fireflies with her nephew and flashes back on being in the park with the fireflies with Conor. No dine and dash. And the scene in the park goes beyond what was seen in Them or Him.) They continue:

Robert's experience, however, touches upon another, even more pressing, central conceptual issue that occupies philosophers, neuroscientists, sociologists and scholars of literature: the problem of the sense of unity of the human experience. That is, the relationship between the multiplicity of the individual's actions and passions and the unity of the Self...

This... Robert is trapped in a moment of... selflessness? No, that isn't quite right. When we say selfless, it means something like operating deliberately outside self, giving unto others. But that isn't what I mean, what Arciero and Bondolfi are saying or what I was feeling back when this blog began, or what I feel deep down inside myself to this day. I mean the loss of self. I mean the sense of chaos that results from not quite knowing what life has in store for you and feeling like you couldn't control it even if you understood it. I mean, the moment, or that day, that month, that year, when half of you goes away and it's your damn fault and you don't know if you will ever feel complete ever again but day goes into day and you have to be something, you have to be someone, and life fucking goes on whether you feel like you deserve it to go on or not. It's a painful moment/day/month/year/life. Imagine a chunk of your core suddenly transported away, Star Trek-style, and you internal organs, and your soul that doesn't really exist except when you are in the most pain, are trying to fill the emptiness inside but they cannot because they have to keep occupying the space they were already occupying and there's just no room to do both, to be both, to exist as you were and as you are and as you could possibly be in the future.

Robert... does not experience his own Self as being stable over time.

Of course, he doesn't.

He might say he does not have a sense of unity, a stable image of the Self, but that in fact he has many, all of which are different.

Maybe, he would argue a few years later, each of those selves within him corresponds to a different movie or a different imaginary life, and trying to merge them into some cohesive whole takes thousands upon thousands of words and he may never write enough to make it actually seem like his self is complete. Or maybe that's just some bullshit line he throws out to sell the fucked up nature of who he is in the future/present when the present/past isn't working anymore.

He would say he is not sure whether he is thinking or acting in a certain way to please the other person or whether he really does believe what he is saying and doing...

Or is he just shoving the myriad words together to imply a semblance of completeness that is just an illusion because his life was broken four years ago and complete recovery is still just a matter of the imagination?

Suddenly she start [sic] being a little less attentive, 'less devoted', in his words. In other words, Sarah begins to be no longer exclusively attuned to Robert's life.

But, that is a lie. That implies a responsibility outside Robert. Something he won't include, explicitly, in his blog because it is not exclusively his story to tell. The tuning out was not Sarah's, nor are Arciero and Bondolfi prescient of whatever. It's just a coincidence that makes it possible to tell a new angle on an old story. A marriage broken apart. Conor and Eleanor have their reasons. Robert and Sarah have theirs.

He falls into the abyss.

And, he blogs about it.