The first awesome thing about The Disappearance of Eleanor Rigby: Them is how it starts like a romantic comedy and then makes a jarring turn with Eleanor's attempted suicide.

Then, it's mostly dark, in different ways. That's what happens when your story begins after a child dies and his mother tries to kill herself.

(That and the broken down relationship... No wonder this film is right down my alley.)

Lillian reads from Selfhood, Identity and Personality Styles, part of the following:

Most people could probably provide an intuitive answer to this question. At bottom, the sense of Self corresponds to that experience of ownership and impenetrability of one's thoughts, of one's internal dialogues, of one's affective states, that many--but not all--of us have from infancy. This 'mental solitude' is held as constituting the basis of our sense of personal uniqueness, of identification and of demarcation from others. It is perhaps that very same solitude that Descartes had in mind when he redefined the concepts of subject and subjectivity.

Ultimately, being oneself means that the faculty of knowing lies within the subject, in his head, and the subject has such a status by dint of being enclosed within himself, separate and distinct from the world and from others. (Archers & Bondolfi, p. 9)

The basic gist of where they're going is that self is defined by... Or I'd alter the wording to confined by the body. And individual is an individual because he is physically separated from every other individual. Eleanor cannot properly communicate her feelings to Conor so she separates. Conor cannot properly communicate his feelings, though he does make a very poor (read: desperate) effort to try. That is where so many of the scenes in this film exist--that space where people try to communicate and fail. So, they make stupid or inappropriate decisions. They lash out or shut down, panic or diminish.

Just now, Conor, sitting down with Eleanor's mother (Isabelle Huppert), noticed that the photo of him and Eleanor and their son (which we will not see until close to the end of the film) is missing from the wall by the stairs. He doesn't know who took it down. It was Eleanor's mother after Eleanor stopped and stared at it. He might think Eleanor took it down. He might interpret it wrong. He doesn't ask about it. Conor follows her. In her class, he passes her a note. He gets into fights. He returns to his father's home. It is as if he is regressing in age. 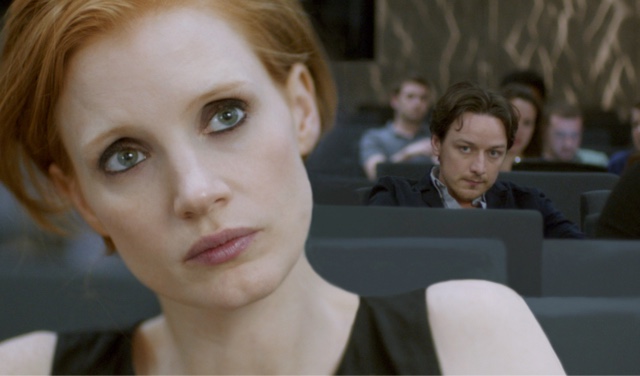 Eleanor, on the other hand, goes to school. She takes care of her nephew. She also returns to her parents' house, but the presence of her younger sister, who has a child, suggests an environment where Eleanor has not quite regressed by being there. Her bedroom is not your usual movie bedroom, something from her teen years full of posters and makeup. Her room is the room of a grownup. There is one page of a comic (not sure what one) but is is framed. (There is another comic in the hall just outside the room, so I wonder if this is even supposed to be her room or a room that has been turned into a guest room.) There is a movie poster (looking at posters for the film, I know there's a second, different poster for the same film somewhere else in this film, but I cannot recall where at the moment), but it is for a French film--A Man and a Woman. I've never seen it but the IMDb logline suggests a relationship therein structured like this film. "A man and a woman meet by accident... at their children's boarding school. Slowly they reveal themselves to each other, finding that each is a widow/widower. Each is slow to reveal anything personal so that each revelation is hidden by a misperception." If you were to go into this movie with no foreknowledge, that is how it would play out. It offers you enough information to figure out the basics but it doesn't let you get to know the characters right away. There's none of that lazy voiceover bullshit.

It's common for movies throw some rain into a film as a cleansing symbol, but here, the rain is something else. A force of nature there to keep Conor and Eleanor together for more time than either one is ultimately comfortable. The scene brings Conor to confession, but there is nothing cleansing about it. If anything, it makes their relationship worse. Fills the space between them with more discomfort, more pain.

Later she will ask Conor if she seems like a different person.