do a good deed in this dirty world

Keep in mind, I grew up attending church every Saturday, and I went to a private school owned by the church and was taught stuff from the Bible every day in church. Our church took seriously the notion that the world was ending soon--you can read some more of what that did to me day 534 - what are you expecting? world war iii. Our church (and more specifically out school) made an effort once to fast forward through the line, "I want my father back, you son of a bitch" in a movie night screening of The Princess Bride. But, here I am, however young I was when I first watched Blackbeard's Ghost watching a movie that involves, accurate scrying (read: witchcraft) by Mrs Stowecraft, ghosts trapped in limbo (which ran counter to our church's version of what happened after death), and that ghost is a former pirate, murderer, pillager, probably a rapist, and he's an alcoholic. But, what does the movie do with all these dark things? It all serves a very simple idea--do a good deed and you too will never (metaphorically) be stuck in limbo. No matter how dark your soul, how dark your life choices, how awful your past actions may have been, you can be forgiven in the end. Especially if people (read: a bunch of old women descended from you and your men) already have formulated a cult of personality around your memory, of course. 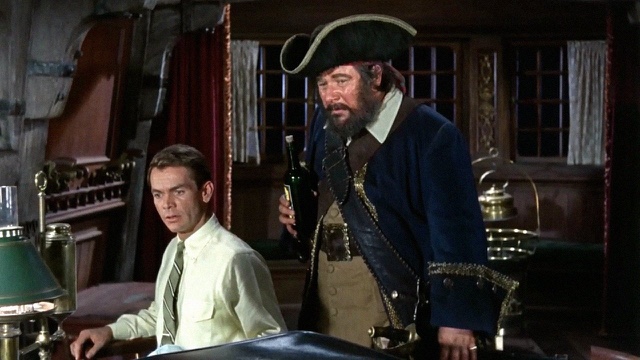 I just want to focus on the good right now.

If your memories and your monuments hurt other people, put them aside.

If you have the opportunity to help some young people brought to this country before they even knew what a country was or what it meant to go from one to another, legally or not, then fucking help.

Don't reject someone because you're afraid of their beliefs or you lump them in with some larger population you would like to pronounce evil...

Except, most of us... Most? A frightening thought, but I suppose it must be true or wouldn't we do more for other people more often? Most of us don't care enough about things outside our own finite little circles to want to make any effort to improve anyone else's lot in life. Hell, it's practically the American standard--if they want to improve their lot, they should lift themselves up by their bootstraps, get a fucking job, and take care of all their own business, nevermind systematic and systemic racism and classist lines too hard to cross, nevermind our inability and unwillingness to imagine what it's like in their shoes, as it were. I was reading a letter written by Alexander Hamilton earlier this evening, and there's a great line in there I wanted to share here, and this seems like the place:

Art thou so selfish to exult because they lot is happy in a season of universal woe? Hast thou no feelings for the miseries of thy fellow-creatures? And art thou incapable of the soft pangs of sympathetic sorrow? Look around thee and shudder at the view. See desolation and ruin where'er thou turnest thine eye!

Specifically, he's talking about the Virgin Islands, post hurricane, 1772. We just had Hurricane Harvey hit the gulf coast, and Hurricane Irma is about to hit Florida, so I'll offer a bit more before I answer what you are asking yourself with some impatience, why include Hamilton at all?

See thy fellow-creatures pale and lifeless; their bodies mangled, their souls snatched into eternity, unexpecting. Alas! perhaps unprepared! Hark the bitter groans of distress. See sickness and infirmities exposed to the inclemencies of wind and water! See tender infancy pinched with hunger and hanging on the mothers knee for food! See the unhappy mothers anxiety. Her poverty denies relief, her breast heaves with pangs of maternal pity, her heart is bursting, the tears gush down her cheeks. Oh sights of woe! Oh distress unspeakable! My heart bleeds, but I have not power to solace! O ye, who revel in affluence, see the afflictions of humanity and bestow your superfluity to ease them. Say not, we have suffered also, and thence withhold your compassion. What are you[r] sufferings compared to those? Yes have still more than enough left. Act wisely. Succour the miserable and lay up a treasure in Heaven.

First, there's that line about seeing desolation and ruin everywhere. With modern media, with the Internet, most people cannot help but suffer some semblance or approximation of mean world syndrome; you see all the horrors, the violence and destruction, if it bleeds it leads and all that, and what are you to think of the world but that it is full of this madness and darkness and pain, and when any portion of it is directed toward you and yours, why wouldn't you imagine that such a portion may strike, that another portion may follow thereafter,because--and I'm talking about us here in the US, though I know I've got readers elsewhere--we think we've got it better and it's just human nature to be envious of those who have it better, and if you cannot have what they have, inevitably and almost deservedly, you turn to force to take it, to have it, to pillage and plunder or destroy. This is the world we imagine when Donald Trump preaches about Islamic extremists taking our lives, about DREAMers taking our jobs, about transgender soldiers costing our military the decisive victory we all must know we are capable of because America is the greatest, even if we hypocritically imply with our stupid hats that it isn't even currently great. None of it is our problem, of course. Not personally. That's why we have a government, and a military, and police. Damn welfare or any system that might relieve the stresses and anxieties of the poor, or sick, the old, the young, anyone who cannot currently rise up and make something of themselves without a little help. And damn them for wanting any such thing, because inevitably, any of us who our making this argument have a job, have a house, have safety and security and can neither imagine nor accept that other Americans cannot have the same unless through some fault of their own. Doesn't matter if we're Protestant ourselves, that Protestant Work Ethic is cut into the very fabric of what we call America.

And, to be fair, it's a lovely idea--that we should each work for what is to be ours--as long as one very simple thing is true. And it never, in any civilized society has been true, so we're so abhorrently naive to expect it's possibility here and now. That need? That it's actually possible for each and every person, despite historical and systemic prejudices and class divides, despite physical and mental infirmities, despite temporary hardships brought on by acts of god or acts of man, to actually achieve success in life (by modern capitalist standards, of course) simply because they put in the effort. It's a lovely, but impossible idea. A nice ideal. But, we do not live in ideals. Even as much as I have suggested that we should try, to the extent that we can, in reading stories, watching movies, and imagining other worlds than our own, other lives than our own.

(It troubles me when, for example, the same person that might argue against raising the minimum wage because prices might go up just after will turn around and neglect entirely the economic damage that might be wrought by deporting all those here illegally--for they have jobs, they have mortgages, they pay rent, they purchase merchandise, frequent restaurants and theaters, and they even pay taxes, but yeah, let us imagine that they are taking jobs from good Americans because our bastard in chief wants to pander to the poor beyond just the racist ones.)

Meanwhile, of course, Blackbeard is cheating on behalf of Goldolphin College and we're supposed to cheer that cheating. And, this is a movie I watched many a time as a kid. It's funny. But, it is also deliberately subversive. Deliberately undermining what could have been a standard sports film, for example. Blackbeard does offer to help train the team. In some other universe, perhaps this film is about that, rather than a rush into the setpiece of the Broxton Relays and the cheating, and then on to the gambling climax and the pirate-as-saviour ending.

And, I can't but wonder, not why can't we bother to care about others, because that seems like something bred deep down within us at this point. But, rather this: what do we do to fix it? How do we show people bloodied refugees in Syria and not support a travel ban afterward? How do we see the success of DREAMers and not turn around and send them all to homes that aren't really their homes because it makes us feel better, because a miracle will happen and everyone here will have a job? But, even more than that, let's say everyone here does have a job, everyone here does have a place to live, everyone here does have a useful amount of healthcare and food and clothing and entertainment. How do we make them care about the people somewhere else even still? Or, are we all so selfish as to exult because our lot is happy in a season of universal woe? Are we so inherently isolationist as to forget the world for ourselves, no matter the conditions of our own lives? Blame them when we feel slighted. Deny them when we feel exulted.

Finally, I want you to know, no matter what happens out there tonight, in my heart, each and every one of you is a champion.