meaningless clues to confuse us

Except, Murder by Death isn't even really a mystery. I mean, it's not like it offers up clues for the audience to solve anything, nor does it even show the detective's discovering useful information for their final solutions (plus all of their final solutions are so far out of left field, and wrong (especially Sam Diamond's (Peter Falk) theory that negates him being himself, which is funny, but ridiculous)). At best, the only things in this film that the audience might be able to figure out along the way, or more importantly, that we see the detectives figuring out, is that there are two dining rooms. Everything else is arbitrary. 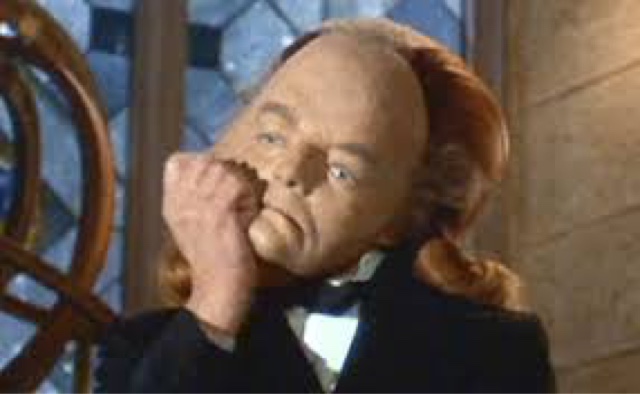 Which, I suppose is the point. I actually wish I had (back when I was a kid, but also now) more experience with the genre this movie is picking apart. Lionel Twain's (Truman Capote) big speech at the end of the film does however take me in a slightly different direction. But first, here's his rant:

You've all been so clever for so long, you've forgotten to be humble. You've tricked and fooled your readers for years. You've tortured us all with surprise endings that made no sense. You've introduced characters in the last five pages that were never in the book before. You've withheld clues and information that made it impossible for us to guess who did it.

Where it takes me is not mysteries but Shyamalanian Twists. (And that isn't me being a racist asshole and misspelling his name to be funny; I don't do that. I'm turning him into an adjective, which in this case may actually be more rude.) Not just the classic horror-film-style twist of the dead killer opening his eyes in the final shot or the corpse gone missing. Not the THE END?, like Flash Gordon, either, or a post-credits bit like Skeletor after Masters of the Universe. Or even the dead body getting up at the end of the first Saw. (Even if Tobin Bell actually spent time on that floor because they didn't have a dummy, apparently.) Those are cheap, but they don't affect the film before them much. A Shyamalanian Twist transforms your understanding of the film before it (or tries to, anyway). The Sixth Sense is one of the better examples of a successful Shyamalanian Twist. There's enough there beforehand that one might guess it, and it actually changes our understanding and our emotional experience of the story when it is revealed. The Usual Suspects is another great example of one that drastically alters the story but doesn't cheapen it. Hell, there may be an important distinction with that example in that--

(SPOILERS... for a movie from over two decades ago... and a twist that everyone who cares probably already knows)

--the revelation of Verbal Kint's identity upends the story he's telling and, in turn, the story we the audience are being told, but it doesn't necessarily affect the plot. His story could still be mostly true and the revelation doesn't have to change it, but it throws another element of meaning over all of it. Primal Fear's twist is similar (though more silly). Shutter Island's twist, on the other hand, is not only poorly executed, it twists the plot as well as the story, negating much of what has come before. Atonement's twist ending negates the plot we've seen, and adds (at least in the film; I haven't read the book) a pointless framing story. The end of Wisdom is another example, the it was all a dream ending that negates everything that came before. Identity is an even more egregious example because it's twist comes before its climax, and it effectively neuters its plot by making prior dramatic tensions irrelevant. At least Wisdom has the decency to come to its climax before it erases it.

Something like Fight Club's twist or The Prestige's twist is like a masterclass in what a twist can do to affect story, affect meaning, affect character, and affect audience. Take Fight Club, for instance--if we're there with The Narrator (Edward Norton) panicking over the horror that Tyler Durden (Brad Pitt) and his followers are about to commit, then where do we stand, morally, when we learn that Tyler doesn't exist... or that The Narrator doesn't exist (depending on how you think on it)? Alternatively, if Tyler's brand of revolution excites us, where do we stand when he turns out to be a figment of the same disturbed mind that was obsessing over the IKEA catalog earlier? The Prestige foreshadows its ending in its very first scene, and its narrator asks us, "Are you watching closely?" As if daring us to recognize the twist(s) before they come.

Some more good twists: Memento, The Others, Planet of the Apes, The Game. And, one that shouldn't be as good as it is (because it comes so early): Gone Girl.

The big problem with a Shyamalanian Twist is that Shyamalan, aside from that first one--

(And, I suppose The Visit manages its twist well enough, but it depends so much on Shyamalan's horribly simplistic misunderstanding and mishandling of mental illness that I just can't be bothered to offer it up as a good example.)

--just isn't that good at them. Signs depends on a dramatic twist (or series of them, I suppose) for its ending, but that dramatic twist relies so heavily on an in-universe manipulation by God that the film's real power depends on your acceptance of that power. To be fair, it has been a while since I've watched Signs but a film that sets out to be about faith ought to offer up a better reason for it than manipulated coincidence. The atheist in me can't take it. The Village actually has, in terms of its story, a fantastic twist built into it, except that a) the film reveals the twist too early to Ivy (Bryce Dallas Howard) and far too early for the audience, for the danger that comes later to have any import, and b) that twist is a little too Twilight Zone to matter in cinematic terms; that is, it's a twist for the sake of a twist. What we've seen so far is not really altered that much by it... Actually, I often contend that minus 2 1/2 scenes, The Village would play far more brilliantly. 1) cut entirely the scene in which Ivy learns the monsters are fake; this would make the revelation that Noah (Adrien Brody) is the monster stalking her in the woods far more powerful; 2) move to later (or remove) the scene where the elders find that the costume has been taken; 3) reduced the screentime of Shyamalan's park ranger and his ridiculously on-the-nose newspaper headlines. Then the twist integral to the premise takes on greater import because the revelation becomes the point rather than the message being the point. Of course, Shyamalan has trouble putting his message in the subtext, or having subtext. Signs invokes the stereotype of the faithless minister so often that it is painfully obvious that the film will eventually shove faith down upon him. Lady in the Water quite literally explains its every twist and turn, while blatantly suggesting that Shyamalan (portraying the messianic writer in the film) is an amazing writer. Unbreakable's twist is structurally cheap (though understandable in terms of character) and may actually hold up better in the future, as Mr. Glass is coming back in Glass. Which brings me to Split, where again Shyamalan mishandles mental illness to the point of being offensive, but also avoids so fundamentally the obvious twist so that the film has no real twist at all... And, yes, I understand that a film doesn't need a twist. Even a Shyamalan film doesn't need a twist. But, if you're going to, you know, be M. Night Shyamalan, and you are going to make a film about a villain with multiple personalities, you have got to Identity that shit; Casey (Anya Taylor-Joy) has got to not actually exist (or Dennis et al (James McAvoy) has got to not exist), play it like Fight Club, do something that makes the story rise above its own mediocrity.

And then I got sucked into a Google search because I wanted to tie into this unreliable narrators, mostly so I could drift away from film for a moment to complain about Stephen King's Wolves of the Calla, and King's tendency in general to have characters make plans essentially in between chapters so the reader doesn't know what's coming. But, I just couldn't figure out how to make that connection, so I can't even make that complaint.

And, the twist ending(s) of Murder by Death come now as I have avoided saying much about the film itself. Maybe I'll get to it tomorrow, because I have a feeling this film told me something fundamentally important about film, if not about life, when I was young.