(We're still not to year of my birth, by the way. This is 1974. But, of course, I was not selecting the movies for my family right out of the womb. That would take at least a handful of years.)

It's an easy opening for any film, any story. Take westerns, for example--which, if you're new, I explored through the month of June, 2015. The classical plot, per Wright (1975) begins: "1. The hero enters a social group." Star Wars offers up Luke Skywalker to gradually pull us into the story of the rebellion. Groundhog Day offers up Phil Connors sent off to Punxsutawney to report on the holiday...

Speaking of Groundhog Day, the train conversations behind Frederick--I'm not sure I ever noticed that before. The English version: "Harry, he was at it again." "So, what do you want me to do about it?" "Every day." "Let him, let him." Meaningless conversation. The same thing you might hear anywhere. No context, no details. Just an argument (of sorts) about some third party. But, what follows immediately thereafter, when we've cut from the train to New York to the train to Transylvania, is: "Hans--" well, I'm not sure of the exact phrasing; Google Translate gave me Er war wieder dabei for a German translation of "He was at it again." The woman definitely says "wieder" and the next line was whilst du damit machen isn't what the man says either, but he does say "machen." I tried Romanian, but that wasn't even close. Jeden tag. "Every day." Finally, Lassen sie ihn. "Let him." Regardless of the exact translation, this is the same conversation in another train, another country, another continent. This is the mundanity of the world Frederick is leaving, just like the office Johnny left, whatever Steve had before he went to Godolphin and got that ghost in his life. What Joe had before he headed for that volcano. What Phil had before he got snowed in in Punxsutawney. This is our transition into another world.

"Well, they were wrong then, weren't they?" First notable line that has been oft quoted by me or a few of my sisters.

"Suit yourself, I'm easy" should have been an easily quoted line, but I swear we never used that one. At least not so much that it still sticks.

I wonder--because I grow tired of the bit about getting into the story--how many viewings it was before I knew what some of the lines even meant, like the "What knockers" line. Or maybe this was where I learned that knockers was used to refer to breasts.

The horses responding to Frau Blucher's (Cloris Leachman) name still makes me laugh every time. I don't know how many times I've watched this movie, of course. That's the point to the movies on the list for this "month" after all. But, that last time I watched it was at an outdoor screening in a park in Pasadena not long before this blog started. Another outdoor screening (of Groundhog Day) that same summer led to me finally going ahead with this blog.

At what point did I understand why the creature would be "very popular" for having that "enormous schwanzstucker"? Certainly not the first time I watched this film.

"What the hell are you doing in the bathroom day and night? Why don't you get out of there and give someone else a chance?" Surprisingly useful line over the years.

Igor casually lighting a cigarette just as they get the creature upright is perhaps both the most insanely convenient act in scripting and one of the most funny.

Interesting mistake I never noticed. When they capture the creature in the street to take back to the castle, Inga (Terri Garr) is supposed to give him another sedative. She stabs him with the syringe but never pushes the plunger. Instead, after she pulls it back out, you can actually see liquid spray out as the creature falls to the ground.

And then we have one of the greatest comedic moments every put to film:

Love is the only thing that can save this poor creature, and I am going to convince him that he is loved even at the cost of my own life. No matter what you hear in there, no matter how cruelly I beg you, no matter how terribly I may scream, do not open this door or you will undo everything I have worked for. Do you understand? Do not open the door.

And, mere seconds later, after the creature wakes and moans...

Let me out. Let me out of here. Get me the hell out of here. What's the matter with you people. I was joking! Don't you know a joke when you hear one. Ha ha ha ha. Jesus Christ, get me out of here! Open this goddamn door or I'll kick your rotten heads in! Mommy!

And then Frederick has to actually try talking through it.

And he holds him. 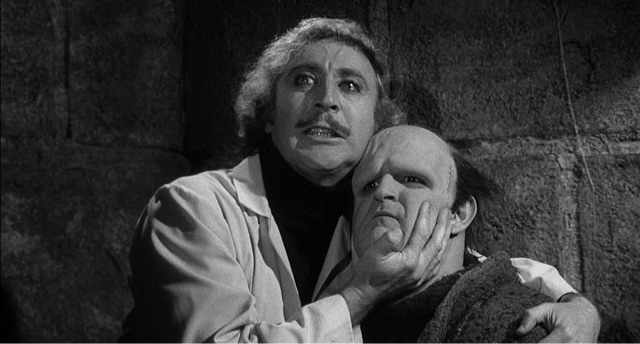 This is a nice boy. This is a good boy. This is a mother's angel. And I want the world to know once and for all, and without any shame, that we love him. I'm going to teach you. I'm going to show you how to walk, how to speak, how to move, how to think. Together, you and I are going to make the greatest single contribution to science since the creation of fire.

Inga yells from outside the room, "Dr. Fronkensteen, are you all right?"

My name is Frankenstein!

And Wilder's performance is awesome. But this moment is also, despite being deliberately over-the-top and silly, surprisingly heartfelt and real. Something this movie does quite well--mixing the send-up of the old Frankenstein films, but while actually offering up its own story that works. And, in this moment, we're there for the comedy and the emotional reality of it. We can actually feel sorry for this monster, for this man.