do a little better this time

I can relate to Amos and Theodore right now because sometimes plans go awry. I was supposed to be watching the original Star Wars today. But, 1) I don't own a copy of that film anymore, 2) it costs $17.99 to buy it on Amazon Prime (and apparently isn't available for rental), 3) I actually bought the original trilogy on video on eBay a few days ago hoping it would be here in time, so I didn't really want to spend money on it anyway (and that VHS trilogy did not arrive in time; let's hope it gets her tomorrow), but then this led to a dilemma earlier, 4) I had no movie to watch today.

So, I was looking up--trying to keep things chronological--movies that also came out in 1975 or that came out in 1976 that fit the bill for this month, that is, I watched them a lot as a kid. There were some good movies in those years--Carrie, Rocky, The Godfather Part II, Jaws, One Flew Over the Cuckoo's Nest, Taxi Driver, and two films I've actually watched for this blog before: The Omen and The Outlaw Josey Wales--but not one of those is a movie I watched a lot as a kid, and several of those are movies I never watched as a kid. One Flew Over the Cuckoo's Nest was apparently #1 at the box office the week I was born but I never saw that film until I was in college the first time. That's when I was wanting to be a film major at USC and I not only watched films in the campus theater for three different classes I took but would also wander into the theater in my off hours to watch movies that other classes were watching. It was maybe a couple years before I was out of high school, and for a few years after, that I would also watch movies at my sisters' houses that I might not otherwise be seeing at home. Though, to be fair, my mother rented plenty of movies from The Wherehouse or (I think) Music Plus that would be termed "inappropriate" for whatever age I watched them. And, cable television made it so that I could watch plenty of "inappropriate" movies on my own, too. Once I was also old enough to rent whatever film I wanted to watch at the local Blockbuster Video or the even localer Now Playing Video, plus I was officially wanting to major in film and whatnot, that is when I really started watching serious films that I hadn't already happened upon. Essentially, this deconstruction I'm doing this month (and probably into the next month) would not be possible if I came all the way forward to the 90s; there would just be too many films. (And, I think I've mentioned in this blog before, that my obsessive watching of the Oscars, and my attempt to see Oscar-nominated films, kicked in in 1994.)

Basically, there were no movies to add to this current month that fit between The Apple Dumpling Gang and the original Star Wars. So then, it came down to watching The Apple Dumpling Gang again, which meant paying for it again--I thought I had a 48-hour rental--and I wasn't eager but I also didn't have an obvious movie worth upsetting the order of this month. So, earlier, I happen to click on The Apple Dumpling Gang on my Fire TV Box and see that it says Watch Again where it might offer a rental price. Turns out my rental was a 72-hour rental, and as long as I started the movie by 10:18, I'd have one more viewing.

This brought the new dilemma. I had nothing more to say about this film. I mean Knotts and Conway are hilarious, but what am I gonna do--recount their every joke? Or, I could theorize about how Jesse McCord in Snowball Express was a descendant of Henry McCoy here, you know, just because they're portrayed by the same actor. Or Inspector Winship and Dr. Tart were descendants of Amos Tucker and Theodore Ogelvie. (And so was Ralph Furley a descendent of Theodore, because, duh.) McCoy could easily get mangled into McCord over the course of a century. And, Amos and Theodore could have changed their names to escape the law at some point, even deliberately run off to England because there was a lot of heat after some big caper in what might have been the third Apple Dumpling Gang film, if the second had performed better than it did at the box office.

(By the way, if you don't know who Inspector Winship and Dr. Tart are, stay tuned, because I will get to that movie soon enough.) 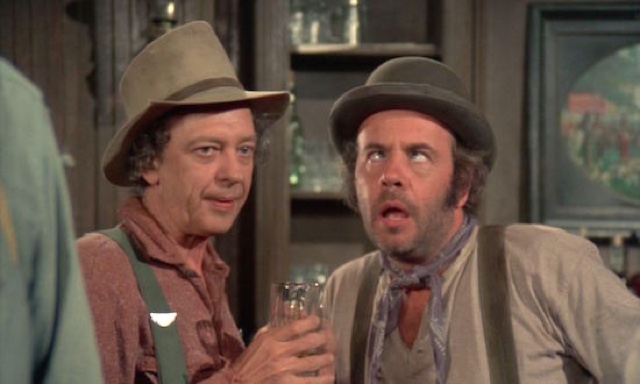 The Apple Dumpling Gang is on, right now, of course. The kids just happened upon Theodore and he's about to get yanked onto the roof of the bank by Clarice the mule. I'm past the rental time, so if I were to turn off the movie for whatever reason, I couldn't start it up again. Without paying for it again, of course. It's a fortunate thing that the first night with this movie was a late one. That was because of going to the 24-Hour Theater Festival at the high school, where my daughter was directing a play. Tonight, I was in an underground gym, beneath a church over in Pasadena, because that same daughter had gymnastics. There are always things going on. Fortunately, streaming services have made a thing like this doable even with the schedules of work and kids. Still, rentals, when I'm getting picky about what movie I'm watching--for reasons such as this deconstruction of my childhood experience with film--can make it tricky.

(By the way, I just noticed that after Donavan hands Dusty the makeshift ring during their brief wedding ceremony, she puts it on her middle finger. So, then I got distracted and did some searching on my phone, because that's what you do in this day and age. Couldn't find a notable reason why she might use that finger, though. (Since the ring comes off some random bottle in the Sheriff's barbershop, the prop might just not have fit Susan Clark's ring finger, so she put it on the finger it did fit. I didn't notice Dusty having any trouble with the fit, though--trying the ring finger and then having to switch--so, if this was the reasoning, it happened before the take you see in the film.

I found someone mentioning some Jewish thing called Chukot Ha'Akum, in which a Jew cannot imitate Gentile customs. Some guy on some message board theorized that a Jew might wear the wedding ring on a different finger. But then, something like the Wikipedia page on wedding rings would probably mention that. You know, if it was common. Still, I was curious if Susan Clark happened to be Jewish, so that got me over to her Wikipedia page, and there I learned that she was not only the mother in Webster, which I maybe should have recognized her from, she was also Cherry Forever in Porky's. So, I guess Cherry Forever, which sounds like a made up hooker name anyway, is a descendant of Magnolia "Dusty" Clydesdale. Even if her name is Cherry, it's probably Cherry Clydesdale... Or Cherry Donavan, I suppose.

But then, I gotta try to remember, was the hooker's role in Porky's a progressive role as far as feminism goes? I mean, what kind of serious rant can I get into about the progress, or lack thereof, from Dusty to Cherry. Hell, there's a good title about women in film (or maybe just a biography about Susan Clark) somewhere there. From Dusty to Cherry: How Film Won't Let Women Get Ahead.

There's always something. Worth ranting about, I mean.)

So, let us hope that my VHS Star Wars trilogy arrives tomorrow. Otherwise, I might be stuck.

(Or maybe I'll go see mother! on the big screen again so I can talk about that... But what does that have to do with my childhood? Unless that baby in the final act represents me, and all those people consuming him are representative of cinema itself, consuming me over all these many years, drawing me in, trapping me, turning me into some obsessive freak who can ramble on for, well, as long as I have today, with only the briefest sign of an actual point. All for the sake of film...