how would you start this movie?

In my younger and more vulnerable years, I was a dreamer. I wanted to write. I wanted to make movies. Along the way between then and today, I wanted to sing, I wanted to act, I wanted to direct. I still have some very incomplete stories that I wrote as early as 4th grade (that's about 1984, when I'm 8 years old, for those of you in other countries where it isn't called the 4th grade. It was 1984 that Andy Kaufman died, too. And, it's 1984 that I've gotten to in this blog's deconstruction of my childhood experience with films on repeat. I didn't have the will then, at 8-years-old, to finish my stories. My imagination was bigger than my attention span or my capacity for sitting down and writing. As this is Day 1348 of this blog, and the entries average well over 1000 words each, I think it should be clear that that capacity has increased. Still, my imagination often surpasses me. Not my attention span, necessarily, but my time, my availability.

I wish my Hyde was bigger when I was a kid.

Amusingly, as Carrey talks about the Hyde inside him, the fugue state he gets into while performing, with the sunlight coming through the Starbucks window on my right, I can see my face reflected in the screen. Jim Carrey, with his big ol beard, talking about his creativity, and I see my own bearded face superimposed over his. And, I'd like it to mean something. I want bigger meanings than I get.

But, life doesn't work like that. Except in the circles of the insane, the "rich", or the insane rich. Carrey can afford, literally, to become an obnoxious bastard on (and off) the set of Man on the Moon because by the time he's in that film, he's world famous, he has made that $10 million that he famously wrote himself a check for when he was still up and coming. The interview that frames the footage through Jim & Andy is a privileged interview. Carrey talks late in the film about no longer having ambition, and it would be nice to be there in life, to have accomplished so much that you could claim no ambition at all, but most of us never get there. Or, if we get there, we realize that there isn't there. Hell, even Jim Carrey has moved on to new things. Lately, if you follow him on Twitter (or occasionally catch a story about it on Fox News) he has taken to painting almost daily paintings, most with a political bent. He has taken on a very visually-based stance against President Trump and the current administration in charge of this country. This isn't necessarily a result of a lack of ambition, it's just ambition in a new direction. The cynical take on this would be that you never can actually feel entirely accomplished, no matter how much you do, how big you get.

There is a great bit in Jim & Andy, an interview with Jim Carrey, Toronto News 1983, and Carrey talks about the being famous enough to be recognized. "You're the crowd's man after a while. You know, it's not Jim Carrey who can walk down the street just... doing anything he wants to and get away with it, because nobody knows you. You know, after a while, hopefully, it'll be to the point where I can't walk out on the street. Won't that be fun?" He laughs, a big Jim Carrey laugh. "Where it'll be impossible to walk anywhere without being recognized." And, it hits him. And, you can see it. The smile is gone. The gleam in his eye is gone. He realizes just how lonely that future might be.

But then, do we really want to feel sorry for the world famous guy who has enough money that he never has to do anything with his life ever again?

That's not entirely fair, though. Money and fame, even career success--these are not everything. Carrey's shenanigans around the production of Man on the Moon were selfish, self-serving, but they also (at least eventually) affected many others involved in a positive way. Jim as Andy met with Andy's parents, with Andy's estranged daughter, with Andy's friends. And, in one scene that we see in Jim & Andy, Jim and the actor playing Andy's father argue in the makeup trailer, and they are both in character, and one of the women working there breaks down in tears because she is reminded of her own father. In a moment of clarity, Jim calls himself "terrible" but in that moment, all of this terribleness seems to be doing something good.

Something that Jim & Andy doesn't do as well as it could is universalizing the experience. There is room here for Andy being Tony, for Jim being Andy and being Tony, to work as a stand-in for all actors, all creative types. But, it almost needs inclusion of other actors. As much as Carrey manages to embody these people that are not him, there is still a visual limitation. The white lanky guy problem, I suppose. Darren Franich at Entertainment Weekly calls Jim & Andy "not quite good, and in some ways the film's point is rather loathsome". But, he says, "it's also an enthralling look at the artistic process--and, maybe accidentally, a bleak vision of the power and privilege of celebrity." Franich says the documentary "prints a few legends--"

Taking the line from the end of The Man who Shot Liberty Valance: "This is the west, sir. When the legend becomes fact, print the legend."

--"Andy Kaufman, the Great Rebel, and Jim Carrey, the Superstar Gone Method who conjured Andy's spirit as a kind of resurrection." Robbie Collin at The Telegraph describes Carrey's "shedding of self" for Man on the Moon as Carrey "seiz[ing] the chance to abandon his own life for a while" and it is in this regard that I find my biggest fascination with Jim & Andy, no matter how perfect an example of privilege it shows us--Jim is still an incomplete sort of person. He's mellow in the framing interview, but he seems to almost need to put great meaning into this experience we're seeing, this transformation he made so many years ago now. Like, if there isn't something profound in what he did, in how his life has gone, than the scared Jim that he was when he was younger never went away. 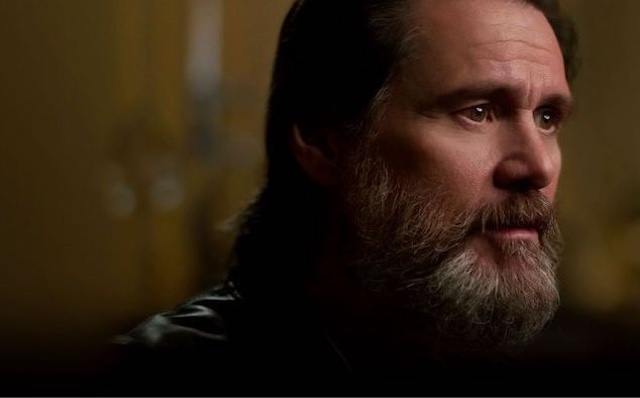 Thoughtful, philosophical guy with a beard, is just another character that Jim Carrey is playing.

Collin suggests, "The emotions [Carrey] stirs up [embodying Kaufman] are very clearly genuine, but there is a mad pre sumptuousness about the act itself that deserved to be more rigorously explored." More rigorously, I'd say, meaning with more talking heads after the fact beside Jim himself. Jim controls the narrative about himself a bit too much here...

Then again, look at the documentaries I've written about for this blog. There aren't many.

Documentaries are hard to blog. They don't have the same sort of narrative structure. They don't have "characters" as such. Except when they do. When writing about Stories We Tell, for example, I drifted into themes of identity and storytelling and even wrote in poetry at one point because the point was not the story but how you tell the story. Jim & Andy is Jim's story. He frames it. He inhabits almost every frame in one form or another. Frames without him are reacting to him.

My own criticism--that the film could use more universalizing by including more voices--decries the very premise of the film. This is Jim's story about becoming someone(s) else and coming out a different person when he was done than he had been when he went in. I can appreciate such a story.