it’s good enough for me

Incompetent police force. Jeep commercial disguised as car chase, and I'll get to the racism and sexism later. But, the first moment of genius comes early--Mama Fratelli, driving the getaway vehicle for her son's jailbreak, and she's eating, casually.

And that car chase allows for some simple introductions to all of our main characters, and offers details on who they are. Andy (Kerri Green) is a cheerleader... That's all. Cheer captain, I guess. Rosalita (Lupe Ontiveros) is (appropriately, I suppose) jumpy, and maybe not that bright. Police cars have sirens so, for example, you don't get caught in the middle of the crosswalk as they come speeding through. (This characterization might actually matter regarding one of the complaints later. [Or tomorrow.]) Mouth (Corey Feldman) tries to be helpful with his father. And it is not their house, mind you--the Mad Jack's Plumbing truck is parked askew at the end of the driveway with traffic cones in front of it. But, he's easily distracted, and maybe has no attention span for being a plumber's helper. Still, he's there. That's something. Stef (Martha Plimpton)... Well, her sticking her head in water to catch a crab tells us nothing useful for later. She's the more tomboy of the two girls. I guess this covers that. Data makes crazy contraptions, but they do work. IN the case of the first one we see, it actually works too well. Chunk (Jeff Cohen) likes food so much that he is eating pizza and drinking a milkshake while standing at a arcade game. But, he's also so aloof that the distraction of the car chase causes him to smash both his food and his drink against the window without realizing until after. And, he swears.

No Mikey (Sean Astin) or Brand (Josh Brolin) in this opening sequence. But, car chase over, it's time for the movie to really get started. CUT TO: Mikey, bored in his room. Brand working out nearby. Mikey uses (wrongly) an inhaler. Brand is a fairly nice older brother. They're going to be moving. And, Mouth shows up to make it even clearer, this is their last weekend together. 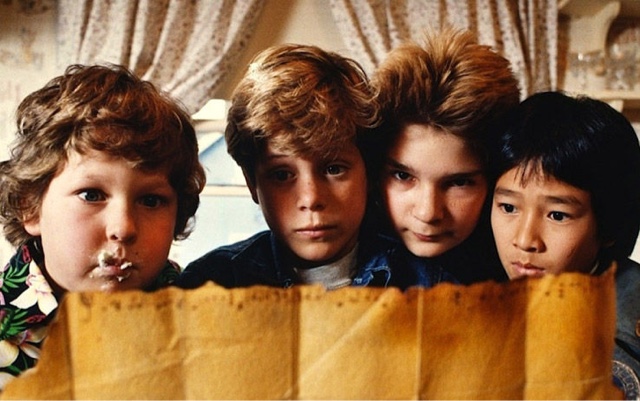 Mouth is a jerk to Chunk. It seems like Data set up the Rube Goldberg fence opener... and Chunk's excitement about the car chase sets up an interesting angle for a lot of what's wrong with the movie--the racism and sexism excepted. The car chase is "the most amazing thing I ever saw" but Chunk's claim is immediately challenged. Mikey asks, "More amazing than the time Michael Jackson came over to your house to use your bathroom?" Mouth asks, "More amazing than the time you saved those old people from that nursing home fire, right?" Brand asks, "More amazing than the time you ate your weight in Godfather's Pizza, right?" Chunk's response: "Okay Brand, Michael Jackson didn't come over to my house, to use the bathroom." Beat. Then, excitedly, "But, his sister did." Later on the phone, the Sheriff (Paul Tuerpe) will add to Chunk's tall tales--"Yeah, like the time you told me about the fifty Iranian terrorists who took over all the Sizzler steakhouses in the city... Just like that last prank about all those little creatures that multiply when you throw water on 'em?" And, never mind the play-by-play; let's just get to one side of what matters here. All the problems with the plot--and the inclusion of the octopus line when that scene was deleted--are covered if we just assume that we are watching Chunk's version of the story. And, in this case, he's an even more unreliable narrator because he didn't even see half the action himself.

There are pipes in the supposedly unexplored tunnel--no problem if this is just the story Chunk is telling.

Data's overdesigned contraptions--no problem if this is just the story Chunk is telling.

Brand should be dead from getting run off the road--you know where this is going.

And a big one, and I'll quote Robert F Mason's piece over at Ranker--"Things You Have To Ignore In Order To Enjoy Watching The Goonies"--

Forget historical accuracy (although... you guys... it would have been the Spanish, not the British, who chased One-Eyed Willy in the Pacific in 1632); the folktale itself is ridiculous. One-Eyed Willy and his crew got trapped underground by the British... and decided to spend their time and resources carving out a dungeon crawl for future D&D LARPers instead of, you know, maybe digging their way out or something? Maybe letting the British believe they were dead, and hiding their treasure somewhere nearby?

But this whole story depends on One-Eyed Willy and his crew having been trapped underground. If they built a device that could have freed them, why didn't they use it? Instead, they apparently sat around a table trying to eat all their gold or something, and all died at the same time.

Because, according to the legend, Willy killed them all to prevent them from getting to his treasure. The treasure that was sitting right in front of them when they died. Along with Willy.

Yeah, Willy died, too. Whatever he did to kill his men also proved fatal to Willy himself. Thus defeating the purpose of his elaborate plan to build a giant booby trap that could easily free him but he had chosen not to use, because it's in the script that way.

All of that--just fine if this is Chunk's version of the story. It doesn't have to make total sense. Hell, even if the events happened exactly how we see them, the we get One-Eyed Willy's story from Mikey, who we know gets things wrong. Trying to delete himself, and retroaction, indeed.

Nice visual reverse--Brand goes flying off the screen downward on that stolen little bike. CUT TO: Mikey, Mouth, Data, and Chunk come upward into frame over the edge of the hill, carrying their bikes.

Treasure maps, generally speaking, don't make sense in movies. You make a map to remember where you buried your treasure. The map is for you. So, you make it with just the right amount of vagueness, in case someone else finds it, but just the right amount of specifics so you can find your stash later. One-Eyed Willy's booby traps do the opposite of the map, basically, so if this isn't just a story, then One-Eyed Willy spread the story about the British and all that so that some other folks later could have an adventure.

Meanwhile, another great little moment--and so many pieces I found call the characters one-note--when Jake Fratelli (Robert Davi) turns on the light inside the jeep for Chunk to see him, in his moment of panic, Chunk starts reciting his Bar Mitzvah aliyot, "Baruch Adonai" and all that.

Then, I forgot to keep writing because this movie is just too fun. Nevermind its problems. The bad stuff is outweighed by the good stuff.