I was raised white. Let me just be honest about that. Born in the 70s, much of my formative development happened during the Reagan 80s and I can't change that. I can't change who I am in that regard, no matter what I do. I saw a lot of movies with hypermasculine heroes killing a lot of foreigners. I saw a lot of random women bare their breasts for a paycheck because the Internet hadn't been invented yet and that kind of thing wasn't available for free. (Weirdly, the new thing these days, in the... Twenty tens? Is showing a penis in your film because that's subversive or something. But, penises are available for free on the Internet, too, so it is a bit... Deliberate, I suppose. All those years exploiting all those young women, I supposed it's fair play that male actors have to show their penises whether they like it or not. Because fuck men, especially white men. They've had the power for far too long.

Like One-Eyed Willy. I mean, who does he think he is? He's got all that treasure. Somehow, he attracts the ire of the British king--even though the Spanish would have been more likely to get involved on the western American coast in 1632--and he gets him and his men trapped in a cave outside Astoria. (Except Astoria didn't exist yet. Wouldn't exist for another century and a half.) And, you not only remain there as your men repair the ship, but you have them also set traps for a bunch of adolescents even farther into the future than the town of Astoria, because that is what a pirate does. And, one of them is Asian, which is offensive because if you've got just one Asian, you can' take him the clever one who makes odd contraptions because that draws on stereotypes about wise Asians, and positive stereotypes are still stereotypes you pirate bastard. Then, there's also the fat stereotype, who is a klutz more interested in a snack than anything else. And, like many a fat character from the 1980s he will inexplicably wear checkered pants (Ricky from Better Off Dead comes to mind in particular, but who wants to be thinking about Dan Schneider at a time like this?) when he would be more likely to wear jeans or tough skins. Because that is what us fat kids wore in the mid 80s. Well, to be fair, I wore tough skins because the private school where I was being trained as a Christian--and, while my white cisgender male training would hold, my Christian training wouldn't quite take over time--did not allow us to wear denim. I actually don't know why. Probably something to do with those commercials with topless young girls bragging about how they don't wear anything under their Calvins. Jeans were too sexy and sex was an anathema unless you were married, and I was never going to be married because the world was going to end in an atomic firestorm and Jesus was going to swoop in and forgive us all for sins like shallow Asian stereotypes in popular movies. Because, Jesus was cool like that.

On the one hand, it's unfair to expect every single character to represent everyone who might be similar. Data's Asianness, for example, is never actually commented on within the context of the film. He's just Data, good (and occasionally bad) with gadgets, and he gets bullied apparently (see Bully Blinders!), but switch Sean Astin and Ke Huy Quan and Mikey is still a doofus who gets words wrong, but Data becomes less of a stereotype... Or at least a different stereotype, one that isn't racist. He becomes a nerdy white kid. (Also, you would have to cut that dumb line about seeing Data's auntie if the tunnels go all the way down to China.) But, I suppose that's the point, isn't it? Mikey is not the brightest of kids. He messes up words all the time, he gives cheesy speeches, he tries to keep his friends away from museum property until, just a moment later, he finds something he wants broken. But, he's the white kid, so are we debating the characterization of Mikey Walsh all these years later? Of course not. Mouth is a little asshole, prone to bullying his own friends, lying to the hired help, and casually insulting everybody. But, he's white so we don't debate the characterization of Clark Devereux all these years later. We do worry a little about the characterization of Chunk, of Sloth, of Andy and Stef. Because they might be white, but they are overweight, disabled, female, and female, respectively. They didn't have the power in 1985. They were props in Mikey's story. 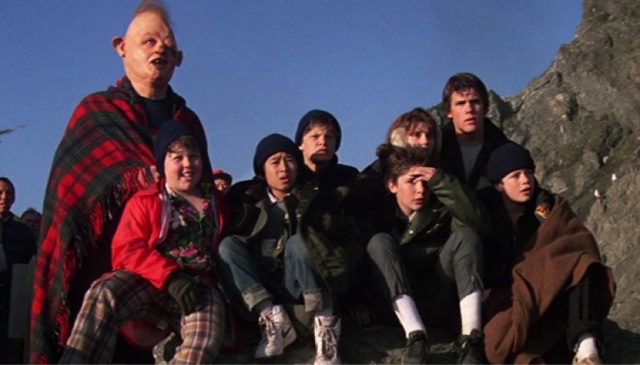 Except for Chunk, I suppose. He's got his own plotline wending its way through The Goonies. Plus, Jeff Cohen thinned out when he was older, and still does interviews about the movie... Plus he was white. Kids like me could connect to him. We could see ourselves up there on the screen and have the adventure of a lifetime, vicariously. In a recent AV Club piece about the documentary The Problem with Apu, Danette Chavez writes,

No one wants to think that the pop culture they love doesn't love them back, but that's the situation in which people of color (any marginalized group, really) often find themselves. They're underrepresented on screen, which makes every appearance significant--and all the more disappointing when their inclusion is limited to caricatures.

White kid is a caricature, so what? There's another three white kids right next to him (five if you count the females). But, one Asian kid. What do you do with him? Whether it's the script up front or the casting altering the script as it was--and since Spielberg knew Ke Huy Quan from Temple of Doom, it was probably a mix of both--Data becomes a stereotype. Not because the production is intent on minimizing the Asian presence. It isn't as sinister as that. It doesn't have to be. Systematic systemic racism doesn't have to be sinister, doesn't even have to be deliberate. It's just a measure of the filmmakers' imaginations that they can can imagine multiple white kids but only one Asian one. So to speak.

In a recent episode of The Simpsons, they commented a bit--some say badly--on the Apu problem. Marge edits one of her favorite books from when she was a kid because it was full of offensive elements that won't fly today. She tells Lisa, "It takes a lot of work to take the spirit and character out of a book. But, now it's as inoffensive as a Sunday in Cincinnati." Lisa says, with a photo of Apu on her bedside table coming into view, "Something that started decades ago, and was applauded and inoffensive, is now politically incorrect. What can you do?" And, response to this moment has been, expectedly, negative. Sure, The Simpsons has a unique problem as it has been on the air a really long time; some of its jokes, some of its characters, were "acceptable" when introduced but time has passed them by. But, the phrasing that gets me is that line about "the spirit and character" of a thing, as if the point to The Simpsons back in the day was in producing racist caricatures like Apu. Like updating such a character, fixing such a character would mean the soul of the show is somehow lessened. Jen Chaney, writing for Vulture has a great line about how this scene ends. Marge tells Lisa, "Some things will be dealt with at a later date." Los responds, "If at all." And, Chaney writes, "Then mother and daughter stare into the camera blankly as if they're being held hostage by their own cartoon." In a way, The Simpsons is being held hostage by its own longevity, but if it wants to be the clever satire it has often been, it needs to update itself.

The Goonies is a different beast, altogether in that it was released in 1985, and only in 1985. I think it's okay if we forgive past artistic product its timely offenses. More than we should forgive narrative lapses or plot holes, certainly. And, for me, looking back now on all these movies I watched a lot as a kid, I have to think of what the movie was then. For me.

I liked Data. I liked his gadgets. (Similarly, I liked Short Round, and wanted to be out there with Indiana Jones, fighting bad guys.) I liked Mouth and all his horrible shenanigans. I liked Chunk and his stories, and his immediate love for Sloth. I liked Mikey and his persistence in saving his family home. It didn't matter to me that Data was Asian. But, imagine if the lead had been the Asian kid, and the story had... something else to it because of the cultural and racial differences. Would I have liked it as much? Would we have had the movie on video and watched it often at home? Or would I have wanted to see some pop culture that looked a little bit more like me?