if you’re so bored, why don’t you go to utah

The Harold Faltermeyer music gets going and I'm all in when Fletch is on. We can start there.

(Even though Hollywood Reporter reviewer Duane Byrge called the "eruption of mechanical drumming and percussive bass lines, appropriate in action and triumph-type movies... Annoying and incongruous here", the music helps define this film for me in a good way.)

The titular Fletch (Chevy Chase) and his sardonic, sarcastic, deadpan disdain for everybody sat well with me when I was just turned nine and it sits well with me today.

(Sidenote: I know the "Pup 'N' Taco" line could be taken as racist and dismissive, but I think it is just Fletch playing unsophisticated because he doesn't trust Alan Stanwick (Tim Matheson) one bit. Hell, most of Fletch's character, and his unsophisticated, boorish, childish behavior, is deliberate.)

Meanwhile, in 2007, Reihan Salam, writing for Slate, calls the film "abominably bad" and I am baffled. Salam does capture a certain tone of the film, though, when he describes the era and context for this film:

Reagan has just been re-elected by a landslide when the film hit theaters in 1985, and Fletch reflects, in a strange and roundabout way, an era of wrenching liberal despair. While the enlightened bourgeoisie and their scruffy spawn were no longer running the country, they could at least laugh along with Chevy Chase as he poked fun at Reagan's America--the nouveau riche, the pig-headed cops, the Mormons.

And there are some beautiful comedic visuals, some fairly subtle. When Fletch talks to his editor ten or so minutes into the film, he (Fletch) doesn't quite have finished the story he's working on. The editor picks up a pot of coffee and his hand is shaking and Fletch picks up a cup and purposely shakes it as he offers, "Can I help you with that?"

And silly ones like Fletch slipping after dressing like a surgeon, with the little booties over his shoes.

But back to Salam and his inability to laugh at anything.

Or--and let's go broad, because I'm in a mood for broad--any conservative that can't take a fucking joke. Or any liberal who can't take a joke, either, for that matter, but for the moment, let us stick with the conservatives. For example, just the other day Breitbart publishes a story: "NBC's 'Timeless' Mocks Christians: 'God Doesn't Exist'". And, for the record, I saw this story because a very conservative, very religious Facebook friend (my high school history teacher, in fact) posted a link to it. The story describes a conversation from a recent episode of the time traveling show (after being sure to point out that "not an episode passes without a major politically correct theme being infused into the storyline... They find racism, sexism, hate, intolerance, and ignorance in America of old"):

Jiya asks Rufus if he ever thought there was "something bigger out there," or a higher power in the universe. In reply, Rufus garbled the concept of prayer and mocked Christians for bothering.

Rufus calls Jiya's "visions" a side-effect of time travel and tells her, "There's no such thing as a higher power." And, he offers a variant of the classic agnostic query: "If everything happens for a reason, then what's the reason for JFK getting shot by some crazy dude with three names?" Then he gets serious. "Look," he says, "when I was a kid, my mom used to thank God for every good thing that happened. And when something bad happened, she'd say, 'Everything happens for a reason' or 'God has a plan'. I watched my mom get on her knees and pray every night, begging God to take us out of our crappy neighborhood. But, you know who did? Me. God doesn't exist." Maybe it's because I'm inherently an asshole and a long-time atheist, but I see no mockery there, and no garbling of prayer, of religion, or any of it. But, even more, this is not the show saying anything about God. This is one character with a point of view. Because, characters are better when they have inner lives and thoughts about the things they do and the things that are done to them. And, honestly, this conversation feels like one of two things in a show like this: 1) a one-off, or maybe just a recurring debate between these characters for them to talk while waiting for other things to happen, or 2) this is a setup, and God himself is going to show up at least on the periphery by the end of the season, and Jiya's "visions" will very much be proven, or at least suggested, to be sourced from that higher power.

Warner Todd Huston, author of the Breitbart piece, says, "Once again we see the insistence that because bad things happen this somehow proves there is no God." Since, I'm going broad, I will counter that it could also just prove that God is a dick. Huston cites a video produced by Dennis Prager about suffering, a basic question of which is, "[H]ow can 'suffering' exist without an objective standard against which to judge it? Absent a standard, there is no justice at all, [Philosopher Peter Kreeft] explained. If there is no justice, there is no injustice and if there is no injustice, there is no suffering. On the other hand, if justice exists, God exists."

Which--and here's some of that mockery that wasn't in that Timeless episode--that's a bunch of circular logic bullshit. You don't need an objective standard to come up with the idea of suffering. Things hurt. We have a nervous system. We have sentience and a deeper understanding of our life and our circumstances than (apparently) most of the animal kingdom. I don't recall the argumentation term for what they're doing here, but it's a bit of putting the cart before the horse, suffering is a concept that comes into being and then gets defined, not the other way around. Similarly, justice is a concept we define based on our own understanding of suffering and fairness. If we require God to define these things for us, then we don't really have as free a will as God supposedly gave us, because all these definitions back us into a corner that would then quite readily teach us about injustice, about unfairness, about suffering, because the threat of punishment will be our only reason for doing good. And, that last line there--which is Huston's phrasing and maybe not Kreeft's, which would explain how simple it is--is not a logical statement because the relationship between the two things has neither been defined or proven well enough to get through this lazy syllogism to that conclusion.

But, that is where faith gets you. Stuck on premises you cannot prove and depending on them to make conclusions that you think now have basis in proof. 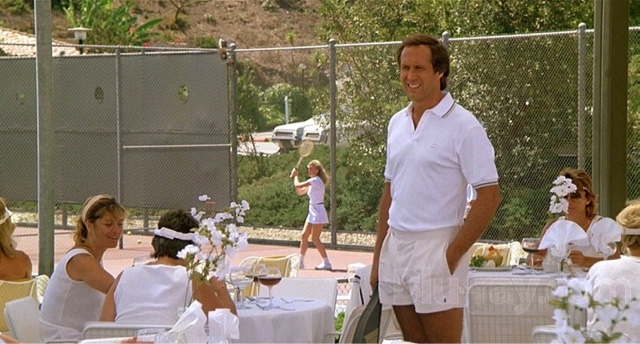 And, then I get distracted laughing at Fletch's antics, and I bother to click on that suffering video. And, I almost couldn't get past this--"If there were no God there would be no absolute standard for good"--because no shit. But, the supposition that we cannot have any standard for good or evil just because some higher power didn't define it for us is, well, silly. Simplistic. Reductive. And presumptuous. Kreeft says,

The most we could say about evil if there were no God was that we, in our subjective tastes, didn't like it when people did certain things to other people.

Yeah, that works for me. His premise here goes on to be that we cannot call something evil simply because we don't like it. But, that is literally how language works. Evil is something we defined after the fact. And, we've codified our standards plenty--but not absolutely, because we don't need to--in establishing and maintains our various cultures and religions and philosophies. Kreeft says,

If you do not believe in God, your subjective feelings are the only basis upon which you can object to natural suffering.

Again, works for me. And, that is why we discover and study things like medicine. This is why we create police and other organizations set to help people in trouble. "There's just nature doing what it does," Kreeft says. And, again, no shit. But, that is why we rein in nature, that is why we build houses and make clothes. That is why we have vaccines. Kreeft is correct when he says that us not liking bad things happening is not evidence that God does not exist. But, his presupposition that God is the only basis for judging good and evil is flimsier. So, I am okay with that.

And circling back to Rufus in Timeless--and weirdly ignoring Fletch--that is his problem with his mother's religious beliefs. She thanked God for the good things and assumed a plan for the bad. Rufus' understanding of religion, of God, may be simplistic. But, that doesn't make it unreasonable. And, I take offense when Kreeft says "You're private standard [for unjust suffering], means nothing." My private standard means everything.

And then I got bored. I think there were a few more minutes left. Huston claims--inaccurately--"Timeless assumes you are a fool to be a Christian." And, I swing back around to Salam:

Watching Fletch again, I experienced the shock of recognition: The film perfectly captures the rise of the ironically detached hipster sensibility. Chevy Chase... dons a seemingly endless series of "comical" disguises in the haphazard pursuit of a big scoop on the Los Angeles drug trade. And yet he always radiates the same genial contempt. Fletch is handsome, self-confident, and he certainly sounds affable. Listen closely, though, and you'll find that his pleasant demeanor masks the condescending jackass within.

That is the thing, though. As much as far too many of us are still Christian--or claim to be--we love a jackass, we love an asshole, we love a scoundrel. And, Fletch is careful to show us that Fletch is effectively (almost) always in disguise. He keeps everyone on their toes, because it makes them more likely to tell him things that they shouldn't.

Fletch has no time for squares. He's happy to charge many a Bloody Mary and steak sandwich to some rich asshole while he's infiltrating a posh country club.

He claims to stick up for the downtrodden. But like the uber-educated hipster kids clamoring to secede from "Jesusland," his disdain is directed against the God-fearing, hard-working rubes of the Heartland.

And, who hasn't wanted to charge a meal to the Underhills now and then?