I actually watched Major League--today's movie in my childhood deconstruction's confused final weeks--just last year. As a movies-by-minutes podcaster, I participated in a charity trivia contest, and along with UHF, Major League was the topic one of the rounds. The final round was live at a movies-by-minutes get together in Portland, Oregon in August. This year's event has been cancelled because a pandemic makes such events problematic. This year was going to be in Philadelphia. I don't think I've ever been there. 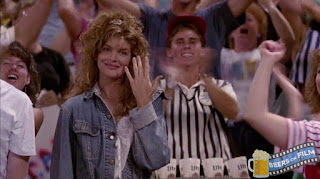 Meanwhile, Rachel Phelps wants to move the Cleveland Indians to Miami, so she has called for some very specific recruits for this year's team, slackers, nobodies, has-beans, weirdos.

Jake Taylor is hungover in Mexico when he gets the call. His knees are shot. But, he' supposed to be a catcher.

Rick Vaughn is in prison when he gets the call.

Eddie Harris has to put, among other things, snot on the ball, to pitch how he wants to.

Pedro Cerrano is into voodoo, which in a film out of 1989 is its only kind of problem even before we know he also can't hit for shit.

Willie Mays Hayes really wants to be there. Also, he's fast but has a problem hitting pop flies.
Roger Dorn is just full of himself.

And, manager Lou Brown is a has been.

The thing is, none of them know they are supposed to be losing. So, they take steps to get better.
Meanwhile, we've got a series of fans and groundskeepers offering their opinions on what's going on every so often, and unlike the raccoons last week in The Great Outdoors this feels like a cohesive part of the film. Probably because fans matter in baseball.

What surprised me watching the film now is that Lynn Wells (Jake's former fiancée) is introduced half an hour in. Like an afterthought. But then, Rachel has disappeared for most of that half hour as well. Baseball is mostly a sport for men, especially in pop culture, But, both women drive parts of the story in ways that feel like they deserve more screen time. Rachel will be back later when the team starts winning, of course.

Harry Doyle, the announcer, is announced a few minute after Lynn and he's probably a far more memorable part of this film...

And, I'm distracted by my lack of interest, generally, in sports films, and specifically, in baseball movies. I mean, something like The Sandlot--that's awesome. But, I'm not one of those guys that gets all emotional about Field of Dreams and, if you read my entries on The Natural (1338 1339) you'll see that movie is worthy, for me, of the kind of treatment I gave Mandy on my podcast Mandy Sucks Minute... Which, I hope you can tell from the title that I wasn't very nice to that movie. For the record, there was one minute of the film where I didn't find anything notable to complain about.
One.

I did grow up watching baseball, but mostly because for a good while, we only had one good TV, and on a Friday night--seventh-day adventist cultists that we were--if there was anything being watched it was baseball. I guess God was okay with baseball on the Sabbath. Or, as American Christians, my parents were okay with a little hypocrisy if it supported their immediate interests.

I knew players' names in the 80s. I gradually stopped paying attention through the 90s. I think I may have mentioned in this blog before how a couple times in the 90s I went to Dodgers games just because my sisters didn't want to drive, and I brought a book along to read. Star Wars books, actually, as my childhood interest had more content coming in the 90s than it had in the 80s. (For a while in the 90s, I read everything Star Wars.) And, I'd still go for an all beef Dodger Dog at the game, and some peanuts, maybe a chocolate malt. Anything for an excuse to stand in line when not reading, I guess.

And, baseball movies are not often much better than baseball games. Shorter, of course. But, other than that time Jeremy had to edit a highlight reel of a baseball game for the first time on Sports Night and he just kept including too much because you needed the drama of the game, I don't know--I just can't care much about a sport where people stand around half the time. I mean, I tried out for varsity baseball in high school, woulda been a pretty good fielder (and hitter) too. But, watching it is not my thing...

Yet, I can watch people play Dungeons & Dragons on Critical Role most Thursday nights and that surely is boring AF for most people.

Baseball movies should be interesting. Sports movies should be exciting. But, so many repetitive tropes in your average sports film that they are all very much the same. But then, that's a complain about any genre, isn't it? I don't know why sports movies are so low in my interests, really. Or why this particular one still works for me. Maybe it's act two dividing its screentime between Jake's pursuit of Lynn and the Indians' playing getting gradually better. Maybe it's something else. Hal Hinson, reviewing for the Washington Post calls the movie "shamelessly formulaic" but concedes (then drifts right back into insult):


At the begin, when it uses Randy Newman's ode to Cleveland ("City of light, city of magic"), the movie has a lovely tone, and briefly, you feel a surge of anticipation, as if the people making it might actually have an original point of view or some feel for the game. All hope is dashed, though, early on, when you realize that they are cannibalizing every other baseball movie. (Newman wrote the music for "The Natural.") This is movie-making by rip-off.

Which all that may sound negative, but maybe it's why, out of all the baseball movies that ever were, this one works for me. It takes the good from the other ones, dips it all in chaos, and has some fun with it.

With Jake's creepy stalker behavior as a partial throughline. Which is the kind of thing I should be harping on. Maybe I will go there tomorrow. In the meantime, Jason Daugherity already went off on it in great detail over at Mandatory. My deconstruction time is counting down. I can't cover everything.
Posted by robert e g black at 9:09 PM