out at the next stop

The setup for Big is simple enough: two sets of twins born in the same small-town hospital are mismatched, years later they're played by Bette Midler and Lily Tomlin, each playing two roles. Class differences, a little nature over nurture, some identity confusion, and hilarity ensues. 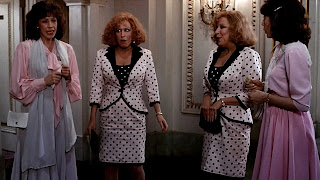 And I must take issue with some of the film's logic right away once we jump to the present. Better Midler is 42 and Lily Tomlin is 48 when this movie comes out. There should be no passing comment about Rose (Tomlin) not being herself today. She is very much herself, Sadie (Midler) just doesn't like it.

But then, on the rural side--and about to make things confusing here--Sadie (Midler) seems far better integrated into country life than her rich counterpart... Until, of course, she says "this doesn't strike me as a life" because maybe this movie was made by the same folks who made Funny Farm--it wasn't--and all they know how to do is have character say things instead explicitly rather than their actions or their expressions telling us how they feel.

This movie would work better if the main characters were younger.


(And, for me, it would play better if so much of it weren't obviously filmed in Los Angeles but pretending to be New York City and Jupiter Hollow.)

And it's taking it's time getting to the inevitable mixup in the present. I mean, wrong set of mismatched twins is picked up in the limo, but that's barely amusing. We're just waiting for something bigger, and--

Poor Sadie knows the word bidet but doesn't know what one is, while poor Rose knows what it is, and that is confusing, like maybe the Roses are just more attentive and intelligent... Which I guess is consistent with the nature over nurture thing. Or Tomlin's performances are just more nuanced.

But then, I'm wondering what the point of this movie is. Like The Secret of My Success crossed with Funny Farm, I feel like the writers, however poorly they're executing the characterization, are trying to say something about capitalism and class differences.

And, it only occurred to me just now that I had conflated this film somehow with Outrageous Fortune (which should have been on my 'movie life' list for 1987) and I was wondering how this plot was going to be up in the New Mexico desert. How I managed to mix up Lily Tomlin and Shelley Long, I have no idea.

The IMDb trivia for this movie makes a point of connecting its plot to Shakespeare's A Comedy of Errors and this movie could use the energy that comes from a good production of Shakespearean comedy, maybe focus on the farce a little more. This movie is one hour thirty-seven minutes but feels much longer. And from the director of Airplane!, it feels like this movie should have a lot more energy.
Posted by robert e g black at 9:21 PM