- July 12, 2020
I don't know why The Great Outdoors starts with "Yakety Yak", but it does. And it reminds me of my recent watching of Stand By Me. A far better film, but they are so different that it's hardly worth comparing. But, comparisons are inevitable when movies come and movies go time and time again. Like, John Candy was was in--what?--two of these childhood fixture movies of mine: Vacation and Splash. He was also in Planes, Trains & Automobiles, which I spent a week on in this blog back in November 2014, except that movies was not a fixture with my family. I'm not even sure we saw it on the big screen. If any Thanksgiving movie made the list, it would be Dutch, which came out in '91 so might be early enough to qualify, or Home for the Holidays, but that didn't come out until '95, far too late for the list, thought we did watch it probably every year for a while there. 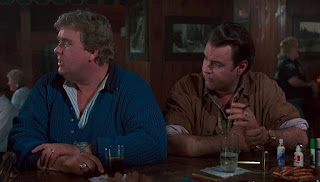 But let us end on a positive. Roman's admission at the climax of the film is set up by one phone call much earlier, in the same scene where he wonders why his kids don't think better of him. That's good screenwriting.
1988 blog childhood comedy connection daily deconstruction every day film films great outdoors groundhog day project john hughes movie movies recap