why do you keep asking me?

I go into this viewing of Tremors assuming there will be little to say because it has no flaws. But, then again, I think Back to the Future is one of the best screenplays ever written and I wrote about that thing for like a week.

Even starting off with what feels like an obvious matte painting watching it today, and one of our lead characters taking a piss off a cliff. It's a remarkably apt opening shot for the film to come. That cliff will come into play later. And, Val not only being out in the middle of nowhere first thing in the morning (though the light reads more like afternoon) but also taking a piss out in the open tells us a lot about him as a character. Plus the cowboy hat, of course.

Earl is introduced asleep in the back of the pickup. And they argue about breakfast, then talk about their schedule in the truck (Earl keeps track, Val wants things easy). 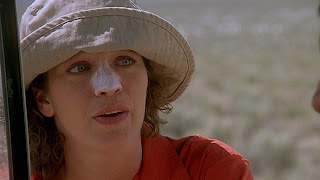 Rhonda is introduced as an immediate punchline to what Val wants the new grad student to be--"long blonde hair, big green eyes, world class breasts, ass that won't quit, and legs that go all the way up"--and she's got a floppy hat, oversized shorts, and a big splotch of zinc on her nose to protect against the sun. She's too good for Val's baser urges, but introduced as the punchline just a couple scenes into the film, we know he is going to realize he's a dick who objectifies women and he needs to do better because a smart woman like Rhonda would be a great catch, as it were. But, then I called her a catch, and that's sexist too. Like Val, I need to do better.

The movie likes to counter Val, of course. He says they needs to set their sights higher when they're dealing with Nestor's garbage, CUT TO, septic tank duty. Set up Earl and Val to pack up and head out of the valley. Except the plot will keep them from getting anywhere.

Handymen in a small-population valley like Perfection is a great choice for leads in a story, of course. They've got access to the rest of the characters. They are mobile. They are inherently rugged. And, when it comes down to it, you know they're going to get shit done.

Notably, the film doesn't begin with Val on the Cliff. There's a cold open with Edgar (the guy they find dead on the tower). Then the cliff. And, this is how the script introduces him:


This is VALENTINE MCKEE (25). Smart and good looking, Val has nevertheless managed to underachieve brilliantly. He coasts through life, following the path of least resistance--which had brought him to this dubious rustic existence on the edge of civilization.But lately he's beginning to wonder why he hasn't accomplished more.


A sexy blonde emerges from the background. Stunning. Definitely a looker. This is JANE.

Mine (altered), for comparison--and I was very disappointed in myself when I saw it today.


On a deck chair is JANE, early thirties, pretty but not beautiful.

Color me disappointed all over again, sharing it.

But, let us continue with Tremors. Once he's awake, here's Earl's introduction:


Earl is a good-ol' boy who has lived his life just like Val, drifting from job to job. He knows why he hasn't accomplished anything, and often tries to impart his hard-won wisdom to Val, but the last thing the younger man wants is advice.

More than physical. Good sense of character. This is going well. But, now the potentially problematic one... Rhonda.

Laden with a portable computer, notebooks, and some seismograph printouts, she stares at him through tilted glasses.

If not for the deliberate counter to Val's pronouncements of what she will be, yeah, this is not a good description to start with, a little too specific, nothing of her character just yet, and painting her only as objectifyingly as Val does. Not the worst introduction, but only because it's making a point. Still, the film finds a way to get Rhonda out of her pants later when she gets caught in barbed wire and a graboid is close. Which leads to Val putting iodine on the cuts on her legs while Earl watches while giving her what the script calls


a big Cheshire Cat grin that says "What did I tell you?"

Interestingly, that bandaging moment plays better in the film because it happens without dialogue, without even much sound. In the script, there's banter:


VAL
You paying attention? This oughta hurt like hell.

She smiles at him.

RHONDA (cont'd)
So, is that one of your usual jobs, saving people's lives?

VAL
(embarrassed)
First time for me.

She gazes at him. He looks away. Over at the bar, Pham holds up a new pair of pants for Rhonda.

Hell, I think she is the only character to change clothes at all during the film.

But, to be fair, I wouldn't say the film objectifies her much between the barbed wire and bandages.