the whole world is about to explode

Captain Colter Stevens (Jake Gyllenhaal) wakes on a train outside Chicago. He sits across from a girl he doesn’t know (Michele Monaghan as Christina Warren), and she refers to him as Sean.

It hadn’t occurred to me in regard to Groundhog Day being filmed nearby (and partly within the city) that Chicago is a great city to film a time loop movie—they call their train “The Loop.” Anyway, before Groundhog Day today is Source Code. 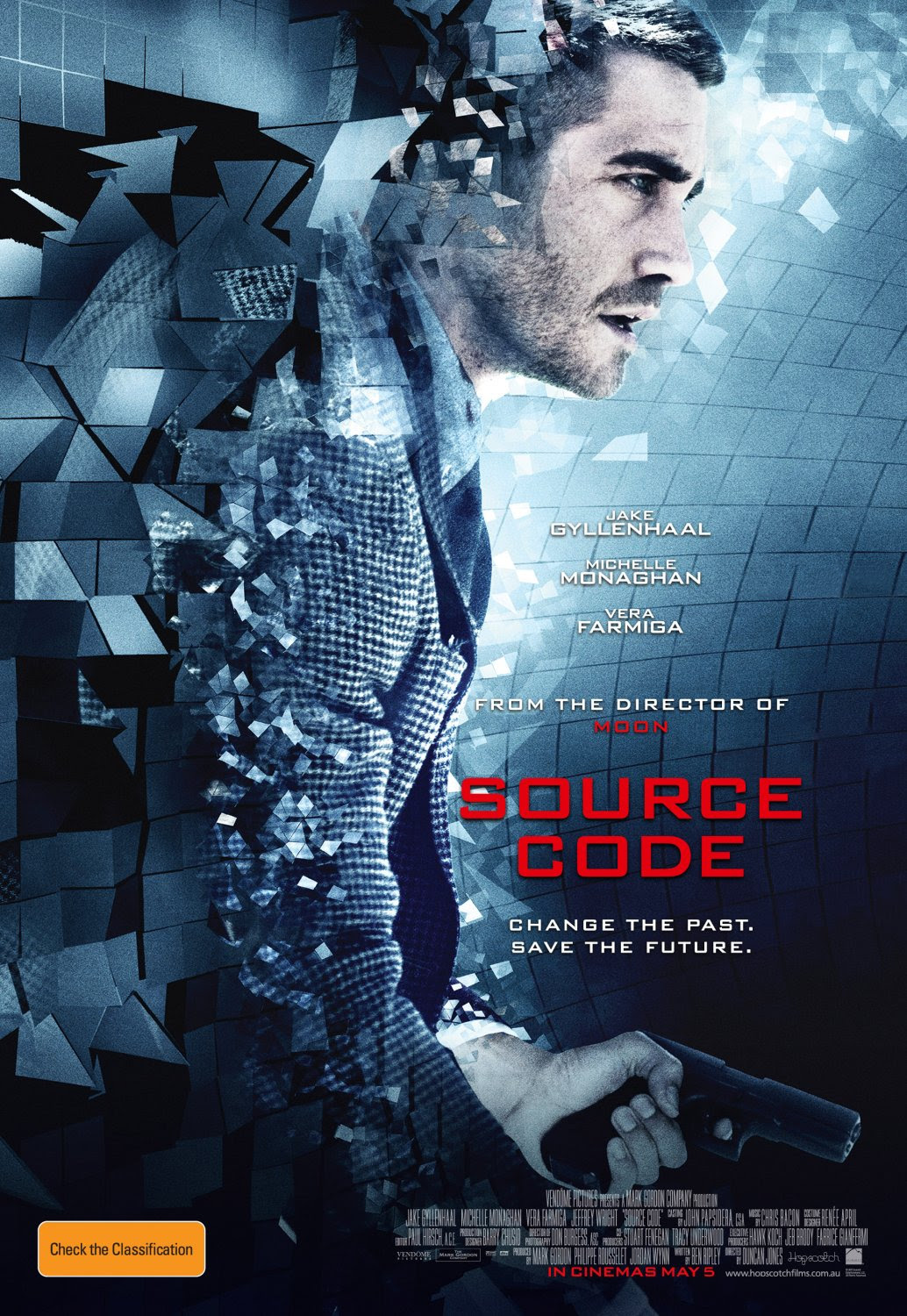 Train explodes, Stevens wakes up in the dark... seems like a sensory deprivation tank... at first. Colleen Goodwin (Vera Farmiga) asks him about where he was and what he saw. Can’t be a deprivation tank because Stevens has some sort of backpack on, and there’s a video screen where he can see Goodwin.

(I know where he is, but I don’t feel like SPOILING it yet.)

Stevens was on the train to figure out who bombed it. He’s got 8 minutes each time. And, he’s back on the train again. Loop markers: Christina telling him she took his advice. A woman spills her coffee. Christina’s phone rings with the ringtone “One and Only” (a song featured in Doc Hollywood). One passenger asks if they’ll make up the 10 minutes—apparently, the train left late. Another calls the ticket taker “Grampa.” Knowing now why he’s there, Stevens makes an effort to look at all the people on the train. He finds the bomb already, second try (to be fair, he couldn’t remember why he was there the first time), but he doesn’t know how to disarm it. He tried to talk to Goodwin, but she’s not with him on the train.

Famous last words, Stevens says, “There’s not going to be a next time,” the train explodes, and he’s in the tank again, Goodwin’s talking to him. Stevens thinks he was in Afghanistan yesterday, but Goodwin says he’s been with them for two months. And, contrary to what Stevens thinks, the train is not a simulation.

Third time, Stevens is nicer to Christina now that he realizes she’s real. Sidenote: apparently Sean is (or was) a teacher. They get off the train rather than stick around for the explosion. The true nature of the loop here hasn’t been explained yet, so while Stevens did follow a suspect off the train, he’s potentially playing with reality itself by taking Sean Fentress’ body where it wasn’t supposed to be. Stevens gets hit by a train, after the explosion killed him before, and wakes up in the tank. It’s colder than before and the communication channel to Goodwin isn’t working.

Suspicious question from the guy in command (Rutledge played by Jeffrey Wright), when Stevens refers to the “capsule” he is in, “Is that where you are now?”

The “Source Code” is quantum mechanics, parabolic calculus... complicated stuff. Rutledge explains it like they are just looking at Sean Fentress’ short term memory from the eight minutes before he died. Except, Stevens is manipulating “Source Code is not time travel, rather Source Code is time reassignment. It gives us access to a parallel reality.” Though Stevens insists he saved Christina, Goodwin explains that Christina died on the train this morning.

Fourth time, with information from Goodwin, Stevens goes for a handgun in a strongbox in the next train car. But, he’s tazered and ends up handcuffed and unable to do anything as the train explodes. Stevens has asked about his father a couple times talking to Goodwin. Now he tells Christina that with a minute to live, he would call his father.

Stevens spots the patch on Goodwin’s jacket and doesn’t recognize it. Back on the train—fifth time—he asks Christina to look him up on her phone. She finds that his “friend” was killed two months ago. This knowledge makes the visuals glitch a bit, like he is in a simulation. He flashes on some images from Afghanistan and wakes up again in the “capsule.” He gets Rutledge to agree to let him be dead if he completes this mission.

Stevens’ time loop was forced upon him, apparently, and he has an even smaller geography available and smaller loop length than Phil Connors has. He can’t become a better person, or anything particularly meaningful. He will save lives from a second attack, and he must come to accept his own death. But, mostly, the film works like a self-contained action film. A smart action film, but still an action film.

(Meanwhile, Stevens has found the bomber, but the guy has an even bigger bomb in his van.)

The great thing about Groundhog Day on the other hand, is that on its surface it plays like a simple enough comedy but underneath it’s far more. 355 entries of this blog more... so far. I don’t think I could write anywhere near as much on Source Code. It starts to get into something bigger when the bomber explains his motivation—the world is hell and we need to bring it down to rubble so we can start over—except there’s no room for discussion, and obviously the film doesn’t want us to consider the bomber’s motivation. At all really, but definitely not as anything legitimate.

SPOILERS necessary now, because the quick flashes as Stevens jumped back into the “capsule” included events that a) did not happen in the original timeline and b) have not yet happened for Stevens—a scene from the end of this film, as Stevens (in Sean’s body) walks toward the Cloud Gate with Christina. 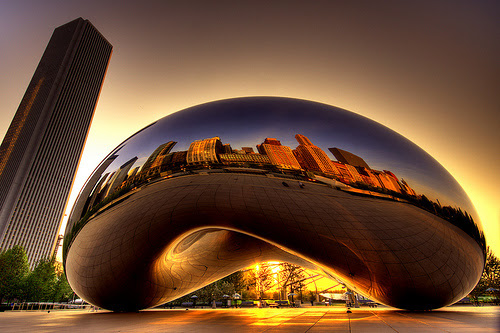 The Cloud Gate is a sculpture by Anish Kapoor. Its mirrored surface implies an infinite reflection.

Stevens wants to save the people on the train, even though he’s given them the name of the bomber to catch him in their reality. He wants to go back in and save the people, even if it is in another reality. And we learn—more SPOILERS—that Goodwin can’t even see Stevens; he’s just text on a screen to her. Goodwin sense him again, but says she will terminate his life support at the end of this source code.

He’s on the train one more time. And, he’s got everything down. He disconnects both cell phones hooked to the bomb this time, steals handcuffs from train security...

Meanwhile, Rutledge tells Goodwin to wipe Stevens’ memory so they can use him again. Memory wiped, it will be like eternal recurrence for Stevens, reincarnation. If they can really wipe his memory, Rutledge has a point about using this one soldier they know can handle the source code,

...Stevens handcuffs the bomber on the train, and calls the police (or Homeland Security or something) to report him. Then, Stevens emails Goodwin and calls his father. He claims to have served with Stevens to talk to him. Meanwhile, Goodwin looks in on Stevens’ body, barely half there, hooked to machines. Gyllenhaal does a good job here with a pseudo-apology to his father which we the audience don’t even know the lead-up to.

There’s a human heart to Source Code but mostly it remains within Stevens. We aren’t particularly privy to it.

Goodwin shuts off Steven’s machines, time in the train freezes... but then it keeps going after we’re shown the flatline on Stevens. In this reality, he’s still there in Sean’s body, and he leaves with Christina, and they head for the Cloud Gate, which Stevens seems to recognize. 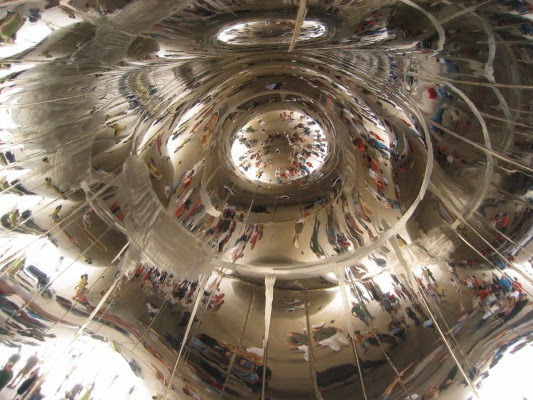 He asks Christina if she believes in fate.