It seems like I write about Bill Murray every day. But, really, I think I only ever focused on him once or twice. I know there was Day 196 – keep the talent happy, for example, in which I place Groundhog Day in context of his larger career, but without actually getting into a lot of detail about each and every film he’s been in because that would be tedious. I wrote about Murray’s feud with Harold Ramis on Day 214 – i am not making it up and I wrote a little bit about Murray’s marriages in on Day 267 – this glass is half empty… usually I just write about Phil Connors instead of Bill Murray. But, today, for practical reasons—

I think I’ve mentioned my folder of unused Groundhog Day articles; well, it’s got nothing but Bill Murray articles left inside

seriously, it bugs the hell out of me, for example, when the new set of collectible LEGO minifigures come out and I’m missing just one; similarly, as I’ve gotten into tabletop games a lot this summer, it bugs me that, for example, I’ve got expansions 1, 3 and 6 for Carcassonne when there are 9 total. It isn’t even that I want the others. I’ve looked at them and don’t particularly need any of them, but, well, it would be really cool to have all of them

—I would be bereft if I did not devote an entry, finally, just to Bill Murray. The thing is, I think, here and there along the way, I have said so much about Murray already that I don’t have much else to say.

Generally, I like Murray as an actor but I’ve got the feeling that he’s a bit like Phil Connors, actually, charming and witty one moment, but a little arrogant and rude the next. I don’t know how much of what his ex-wives have accused him of is true but it actually wouldn’t surprise me much if all of it turned out to be true. I’m the bad guy in a debate who will defend the jerk when no one else will sometimes, so I must also say, I’m not sure that any of that stuff necessarily even means he’s a bad guy. I think we are all capable of doing bad things, of being cruel, of cheating on spouses, of getting violent. But, we are also capable of doing good things.

I have avoided details. I should stop that. Allow me to backtrack.

For example, in 2008, Jennifer Butler Murray accused Bill of, among other things, the following (taken from the divorce complaint):

Defendant has physically abused the Plaintiff on more than one (1) occasion during the marriage. The latest altercation occurred in November, 2007 at Sullivan’s Island when the Defendant hit her in the face and then told her she was “lucky he didn’t kill her.” Defendant’s violent, abusive and erratic behavior toward Plaintiff has destroyed the marital relationship between the parties and Plaintiff no longer feels safe being in the presence of Defendant.

On the positive side—and coming from one of the four articles left in my folder—Josh Tyrangiel describes in Time International, January 10, 2005:

Following The Razor’s Edge, Murray basically took four years off. He studied French at the Sorbonne, traveled extensively and turned down lots of easy money. He was very happy. “A lot of us work in whatever we can and let the locusts come in and clean our bones,” says [Dan] Aykroyd. “Billy’s different. He’s off on another kind of journey that people, including me, don’t always understand.”

Of course, this aloofness—the whimsical traveling for example—had its darker side later, according to, again, his second wife, Jennifer. Again, from the divorce complaint:

In 2006, the Plaintiff moved to Sullivan’s Island with the parties’ four (4) minor children due to Defendant’s adultery, addiction to marijuana and alcohol, abusive behavior, physical abuse, sexual addictions, and frequent abandonment. Defendant would often leave the state or country without telling Plaintiff. Defendant left for extended periods of time without speaking to the Plaintiff or his children. Often Plaintiff is unaware of the Defendant’s whereabouts. On information and belief, Defendant travels overseas where he engages in public and private altercations and sexual liaisons.

As weatherman Phil Connors, Murray was doomed to relive the same day until he got it right, in the process evolving from a surly (but funny) egoist into a sweet (slightly less funny) human being. “In the role he actually got at the edge between the better, higher, gentler Bill and the bad, cranky, dark Bill,” says [Harold} Ramis. “He figured out how to project the entirety of himself through characters. When we were making the film, I’d launch into some explanation of the scene we were about to do, and he’s say, ‘Just tell me—good Phil or bad Phil?’” 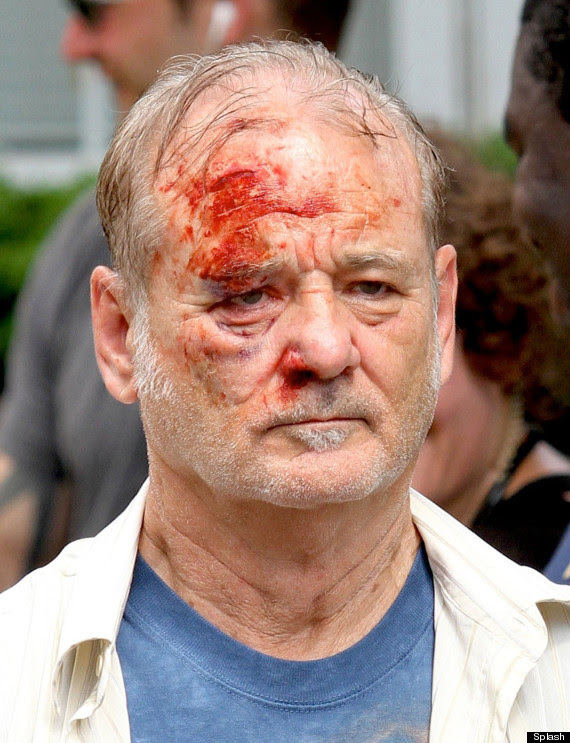 (Those injuries are not real. This is from the set of St. Vincent de Van Nuys. But, I felt this image invoked in a backward way, some of what I had to say today.)

It’s really only because Bill Murray is a public figure that we can readily access a copy of his wife’s divorce complaint and dredge up accusations that have power, regardless of truth, just to share them again in something like this blog. As I said above, I wouldn’t be surprised if his wife’s accusations were true. His idiosyncrasies, his eccentricities, his aloofness—these things fall right in line not only with the kind of guy who would drop his agent and get an 800 number he sometimes doesn’t even check because he’s busy but also the kind of guy who would travel the world without notice to his wife and have sex with other women.

Interviewed on About.com regarding Lost in Translation, when asked, “What was the biggest challenge in expressing this character’s issues?” Murray answered:

As an actor, and as a writer/director, the question is is it going to be very noble here? [Is] this guy going to say, “I just can’t call you. We can’t share room service anymore?” Is it going to be like that sort of thing, or is it going to be a little more real where they actually get really close to it?

I think there’s one interesting scene - well, there’s a lot of interesting scenes - but there’s sort of a tricky scene where they’re in the same room and they’re watching “8 ½” and they’re talking about stuff. I’ve been in this situation before and I’ve seen people do it. I’ve seen other people do it in other movies. I know that you sort of want to, because you’re so close to somebody… It’s so promising. It would be so easy to do this right now and all I’d have to say is, “My wife is a bitch. My wife is a pain and my kids drive me nuts. I love them but they drive me nuts.” And that, to me, was the moment where, “Okay, how is this guy going to be respectable and not in a politically correct way, but in a way that I can feel like it’s true?” It validates all the complication of it. It’s going all the way and just saying, “Okay, and there’s more to it than this. Even though you’re with a beautiful girl and it’s the middle of the night in Tokyo, you’re never going to be one of my kids. Once you know that, now what are you going to do? Let’s get that straight.” Instead of saying, “This is the end of the conversation. I’m not going to walk out the door and slam it or anything. It’s just matter of fact. This is who we are.”

It’s strange; I find myself wanting to come to some conclusion about Murray—is he a good guy, is he a bad guy? But then, I’m reminded of another of my favorite movies, Zero Effect. At one point, Steve Arlo (Ben Stiller) insists, “There aren’t any good guys. You realize that, don’t you? I mean: there aren’t evil guys, and innocent guys. It’s just - it’s just... It’s just a bunch of guys.” I don’t need to justify his bad acts or even stress his better ones. In one of my favorite novels, Speaker for the Dead by Orson Scott Card—

and there’s another example, perhaps, of needing to separate the author from his material, or to accept the juxtaposition of the two

Though, I figure Phil is capable of some pretty bad stuff as well. Think about it; one of the first things he does after figuring out there are no consequences to his actions is punch a guy just for being a little annoying. In the moments we don’t see—because Groundhog Day is a relatively wholesome family-friendly comedy—Phil probably gets up to stuff as bad as the drug-filled party in Danny Rubin’s original screenplay, or worse…

But Phil learns. He learns contentment, and he learns forgiveness, and he learns kindness. He sits in the Punxsutawney diner [the Tip Top Café], happily reading—but he’s not just reading, he’s radiating Buddha-nature. It’s all expressed in the trajectory of his relationship with Rita. He wants her, he tries to seduce her—first with meanness, then with fraud, then with recitations of French poetry and engineered perfect moments. It is only when he gives up, when he accepts the blessing of her company, free from desire—at which point she, too, magically becomes a far more interesting character—that she is delivered into his arms.

Does Bill Murray also learn? Has he become a better man in as many days, like Phil?

Allison Hope Weiner and Karen Valby, writing for Entertainment Weekly, October 10, 2003, suggest Bill Murray might be a “mad genius.” But they also describe how, for example, when the makers of Bad Santa wanted him for their lead, “‘Everyone eventually lost their patience” trying to woo the star, and Billy Bob Thornton was cast in the title role instead.” Murray operates on his own, unique wavelength. At his best, at his worst, he’s someone capable of… the unexpected. Harold Ramis told Jeff Labrecque, writing for Entertainment Weekly, July 2, 2010: “[Murray] was always unexpected. Where anyone else would go subtle, he would go huge. And where anyone else would go big, he would go very subtle.”

Murray told Charlie Rose earlier this year, “I live a little bit on the seat of my pants, I try to be alert and available,” he said. “I try to be available for life to happen to me. We’re in this life, and if you’re not available, the sort of ordinary time goes past and you didn’t live it. But if you’re available, life gets huge. You’re really living it.”

‘As I once said to one of my brothers, “This is your life, not a rehearsal.” Somewhere there’s a score being kept, so you have an obligation to live life as well as you can, be as engaged as you can. The human condition means that we can zone out and forget what the hell we’re doing. So the secret is to have a sense of yourself, your real self, your unique self. And not just once in a while, or once a day, but all through the day, the week and life. You know what they say: “Ain’t no try, ain’t nothing to it but to do it.”’

We are each and all an amalgam of our parts, the good, the bad and everything in between. To pretend otherwise would be to be dishonest.

Today’s reason to repeat a day forever: to be myself.