Frank McCallister is deaf or Harry Lyme is an oblivious fool who is as inept at impersonating a cop as he is at robbing houses... Actually, that’s not fair. Harry and Marv do just fine with the whole burglary thing until they get to the McCallister house. But, my point here as I start is... Well, just look: 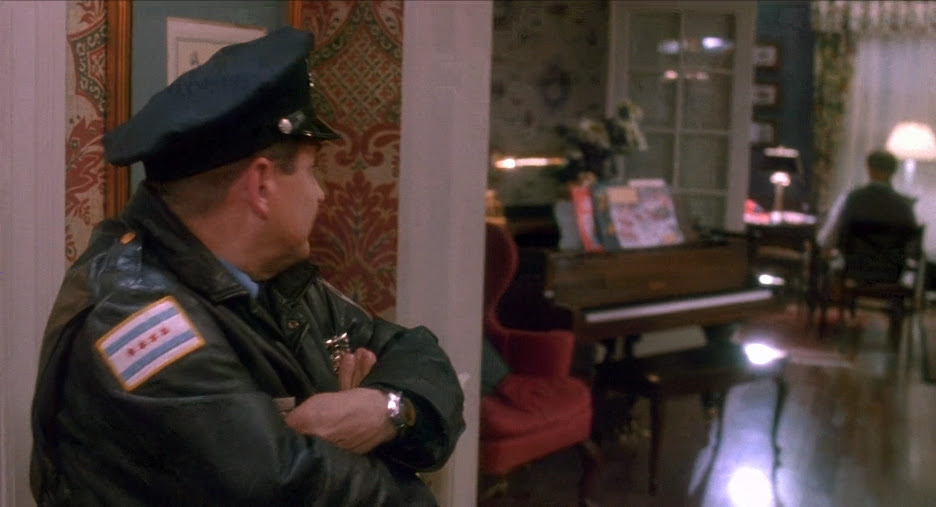 Looking right at him, too.

That seems to be Frank sitting just a room away when Harry is looking for adults. Or maybe it’s a ghost, like the ghost of Ted Danson in Three Men and a Baby. Or maybe Harry didn’t really want to talk to any adults, because he can’t handle that sort of thing. He only talks to Marv because Marv is a bit immature. Maybe that’s why Harry turned to crime in the first place; he just cannot handle regular life, holding down a job and that sort of thing.

A separate issue (but not so separate, perhaps) arises with Kevin’s tendency to talk to himself, particularly while looking in the mirror. Subramaniam (2008) argues, “When a child is born it is unable at first to acknowledge a difference between itself and its mother.” It may not be an accident that a) it is Kevin’s mother who makes the long trek home to her son and b) Kevin’s biggest conflict the night before the McCallister clan heads to Paris is with that mother. Home Alone is not quite a coming-of-age story, because Kevin is a few years too young for that. In fact, the film specifically references his lack of interest in unclothed women (i.e. any sexual interest) when he tosses aside Buzz’s copy of Playboy, calling it “sickening.” Kevin McCallister may be precocious but not in any manner related to sexuality. However, he is definitely in the process of creating his identity as an individual. From his interactions with his mirror image to his lament that he is “a criminal” after inadvertently stealing a toothbrush, Kevin is effectively deciding who he is as we watch. This may not be the usual coming-of-age story, but it is still a coming-of-age story in terms of identity (self) construction.

Essential to the construction of self here is an understanding and fear of the Other. Subramaniam suggests that a male child recognizes the anatomical difference between he and his mother and “turns toward his father and is given a structured identity.” It’s a simplistic understanding of both gender identification and the construction of self, but it seems at first blush to still be correct. That is to say, a child’s parents (and siblings) are, indeed, his/her initial models for who he/she is going to be. Jumping forward in time, Fiske (2002) points out, “People typically seek other people who are similar to themselves, being comfortable with others they perceive as members of their own in-group” (p. 123). We look to those with whom we already share similarity—like Kevin with his own mirror image, who uses spray deodorant and aftershave as if he is older than he is—to find ourselves. Taking into account the stereotypical role of the wife and mother, Kevin’s trip to the grocery store represents a sort of supplanting of his own mother’s prior role in his life, he even pretends to read Woman’s Day in line. While Subramaniam argues that the male child “is termed male and given a nationality and is defined by the symbols that come to represent who he is,” Kevin foregoes the symbols that represent who he is because, like the title says, he is home alone. Without the family which defined him—just look at that scene at the dinner table in which everyone looks angrily at him—he is forced to define himself, acting as (perhaps) both mother and father.

But, my argument here is not about the gender side of things—even if Kevin’s violent defense of his home is inherently “masculine”—but the division between self and other and the creation thereof. Along the way, one might argue, Kevin is choosing his masculine side because of the violence, but then—stereotyping, of course—he also operates through his feminine side in the cleverness of his various traps and manipulating the burglars and the police into another house—

In that house, there are shades of Clover’s (1992) Terrible Place, a house or tunnel that initially seems safe—Kevin uses it to clinch his trap—”but the same walls that promise to keep the killer out quickly become, once the killer penetrates them, the walls that hold the victim in” (p. 31). Kevin is slowed by the watery basement which he does not expect, and for the first time the burglars outsmart him by not following him but rather catching him unaware as he gets into the house proper. If not for Old Man Marley, Kevin would not have made it out of the Terrible Place alive... On the other hand, Kevin specifically discusses his fear of another dark place, the basement in his own house, and overcoming that fear by confronting it. The unexpected Terrible Place, on the other hand, he cannot overcome. At least, not on his own.

He is saved, notably, by a man who was previously the Other. In fact, he was not even an unknown Other, but a specifically identified, dangerous Other (nevermind my argument yesterday about why Kevin should have been quite familiar with the old man). The thing with Home Alone is that Kevin has a reasonable fear of the Other when it comes to the burglars and a specifically stated (but seemingly playacted) fear of the Other when talking to the cashier at the grocery store.

(I must interrupt to continue my complaints about just how well Kevin’s traps all work, especially in sequence. The blowtorch, had it been Marv and not Harry to open that kitchen door, would have burned a guy’s face, not comically burn the top of a guy’s head. That would not have been nearly as funny.)

Anyway, Kevin is reasonably wary of strangers and of his surroundings. Marv and Harry, on the other hand, clearly are not, when they should be. They never look before they leap, so to speak. The Christmas ornaments and toys on the floor and the glowing red doorknob, for example, could have all been avoided if these guys would have just demonstrated a little fear or at least wariness.

And, now they are about to swing into a brick wall because they think they have nothing to fear. Before they go out onto Kevin’s rope, Harry asks, “Are you scared, Marv? Are you afraid?” He should have been.

This topic may continue tomorrow. We will see.

Subramaniam, S. (2008). Perverse Pleasure and the Fear of the Other: The Failed Colonization and Deviant Allure of Bram Stoker’s Dracula. The Common Room 11(2). http://departments.knox.edu/engdept/commonroom/Volume_Eleven/number_two/Subramaniam/print.doc