the season of perpetual hope

Oh, the red and green. I wish I had the time to grab screencaps galore, because it is kinda crazy how much red and green is in this movie, particularly the beginning. It’s like the McCallister house is where Christmas threw up. Wallpaper patterns—several of them—red and green. Rugs red and green. Red bedspread. Red flowers (and not just poinsettias). Green lampshades, green phone. Kevin’s shirt is red and green (the green looks blue in some shots). Red chairs. Every one of the kids (plus Frank and Leslie, but not Peter (though he’s got a green and red scarf when they run through the airport) or Kate) is wearing red, green or red and green... except Linnie; she wears pink, but she’s got a necklace that looks like Christmas lights. Here, look at this: 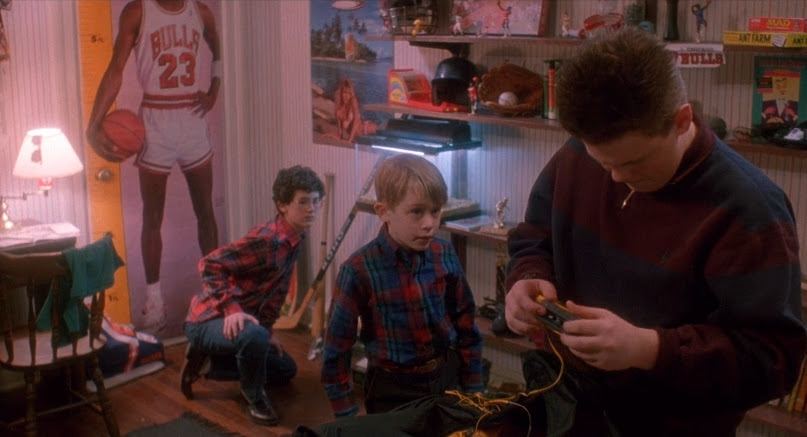 Buzz, Kevin and Rod all wearing red and green. Someone let the set decorators and costumers go a little nuts with the Christmas decor.

The thing is, with all that red and green—not to mention the perennial viewings in December—this movie pretends to be the Christmas movie. But, really, the movie is barely about Christmas at all. It’s like a Shane Black-penned movie, set around Christmas just because.

(I did not catch this myself—saw it on IMDb, but the neighbor kid who screws up the headcount mouths the airport shuttle guys’ lines when he’s not saying his own.)

No, this is not a Christmas movie, per se. This is what a movie is if Christmas vomits on it. Even Buzz’s room is full of red accents.

(I wonder if this furnace in the McCallister basement, is somehow the same furnace that killed Fred Krueger since he’s got a McCallister sweater.)

But, what do I know? I didn’t celebrate Christmas growing up—pagan origins and all—and it’s just a commercial thing, an opportunity for family get together(s) and parties.

(Kate McCallister is kinda rude to the French woman on the phone. I mean, as far as she knows, that phone conversation was a life or death matter. Kate may have just killed someone.)

Anyway, I don’t know from Christmas or Christmas movies or what Christmas means. I did a speech on the tree from A Charlie Brown Christmas so I know Charles Schultz thought the opposite of the true meaning of Christmas was commercialism. Home Alone 2 had a tie-in tape recorder thingy you could buy in stores. I’m not sure there was much tie-in merchandise for this movie, but I’m sure there was some.

Home Alone is not about Christmas. Christmas is just incidental. Even Kevin’s weird excitement at snow Christmas morning, and his expectation that somehow that means his mother is there, makes so little sense that it couldn’t even be a “Christmas miracle.” There’s snow on the ground already at the start of the film. It’s winter in Illinois. Snow is not special.

(I am not sure how Kevin did laundry. He bought laundry detergent at the store but when his groceries fall, there is no detergent bottle. Plus, later he tells his family he bought fabric softener, not detergent.)

Christmas also is not about forgiveness. If, cinematically, it is, that’s probably because of this movie. There is, like with the Thanksgiving movies, a sense of family and togetherness around the holiday, but this movie rather deliberately avoids that. Like Planes, Trains & Automobiles to Thanksgiving, Home Alone is to Christmas. A build up to something meaningful minus all the meaning. An excuse for laughs with a holiday painted over it.

Meanwhile, there are things I will not get to write about, because tomorrow I will move on to another movie. For example, Harry has some serious issues with violence. He threatens to “snap off” Kevin’s “cajones” and boil them in motor oil at one point, and at the end of the film, he threatens to bite off Kevin’s fingers, one by one. Fee (who also wrote one of the injury pieces I dealt with yesterday) put together a piece about how Kevin’s uncle Frank was behind the attempted burglary. He’s got some factual errors—Frank, for example, is not seen on the phone at the Paris airport even though Fee asks who Frank is talking to in a screencap. For another example, he says Frank is in first class “courtesy of his brother” but then suggests that brother is Peter, but the trip to Paris was actually paid for by a third brother, Heather’s father who was transferred to Paris last year. But, it’s a nice piece..

An even better piece is Jason Concepcion’s Hollywood Prospectus piece about how Kevin McCallister may have grown up to be Jigsaw from the Saw films. I especially like the comparison in the sense that Kevin’s traps are all set up to be self-inflicted, much like Jigsaw’s traps.

There’s also an entire blog entry in why Kevin sets the feather trap, which causes no injury. But, no, I am done with Home Alone after today. And I think I may be too tired (speech tournament today) to really put together final thoughts on this movie. But there will be more Christmas movies.