when christ was born

I am not going to argue that Kevin McCallister is a Christ-Figure. Let us just get that out of the way right off. He’s closer to the Satan-Figure, really, but I’m not sure anyone has set criteria for that. Instead, I will be dealing with a character with a lot less screentime—Old Man Marley.

Once again, I will be using Kozlovic‘s scale... actually, I will probably deal with my Kozlovic-Black scale, taking into account Larsen’s (2013) insistence on a sense of atonement.

Now, on with the Christ-Figuring. For those of you new to this process, Kozlovic lays out 25 structural elements for the cinematic Christ-Figure. I tally the Christ-Figureness out of 25 (probably with a bonus point if Larsen’s atonement is present.

1. Christ-Figures must be tangible. Simple element, and Old Man Marley fits it. 1/1

2. Christ-Figures are the central protagonists of the story. Old Man Marley is not, so he’s already down a point. 1/2

3. Christ-Figures are outsiders. As a rumored mass murdered, Old Man Marley would qualify here, but Kozlovic specifies that the Christ-Figure is an outsider because he is “‘from above’ or ‘beyond’ or ‘not around here’“ ... actually, the neighborhood in Home Alone is Winnetka, Illinois. And, Old Man Marley is supposedly the South Bend Shovel Slayer. South Bend, Indiana is 115 miles away, so he is (according to Buzz, at least) literally from “not around here.” 2/3

5. Christ-Figures have alter egos, “dual identities, one mundane and the other fantastic.” Old Man Marley and the South Bend Shovel Slayer. 3/5

6. Christ-Figures are “very special, rare and unusual beings although they typically appear as normal human beings doing mundane activities.” I don’t know how special, rare, or unusual Old Man Marley is, but he definitely appears as normal, performing the mundane activity of salting the sidewalks. Cinematically speaking, the character is special inasmuch as without him there is no notable emotional climax for the film (I really cannot count Kevin’s reunion with his mother). I am feeling generous. 4/6

8. Divine mission begins at age 30. Roberts Blossom, who plays Old Man Marley, was born in 1924 (and so, presumably, was Old Man Marley), which means he was 34 when he killed all those people. Not that that is a divine mission. 4/8

This is not going as well as I hoped.

14. Sacrifices benefit others. Since Old Man Marley is not doing so well, I will give him credit for going around salting the sidewalks. Surely, the neighborhood folks—who, I think I’ve mentioned previously, are strangely absent from the movie—benefit from this with the not falling down and injuring themselves. 5/14

15. Sacrifice comes from “newfound knowledge, status, position or cosmic mission requirements.” Yeah, Old Man Marley may have a cosmic mission, but the film says nothing about it. 5/15

16. Accused of crimes but are entirely innocent. Yep. Old Man Marley is presumably not the South Bend Shovel Slayer. 6/16

18. Cross imagery. Not counting the literal crosses that might be in the church, so not really... except Old Man Marley is present for Kevin to be hanging... not on a cross but a door hook, which would imply Kevin is the Christ-Figure here, which he definitely is not. I cannot give him this one. 6/18

19. Miracles. I actually want to give this one to Old Man Marley simply because he operates as the deus ex machina in the end, arriving inexplicably to save Kevin from the Wet Bandits. 7/19

22. Physically clothed to look like Christ. Kozlovic means the white toga imagery, but once upon a time I gave Phil Connors in Groundhog Day this point because he wears that long coat all the time, which is a darker sort of covering. Similarly, Old Man Marley wears a long coat and never changes his clothes throughout the film, even though the film covers Tuesday night to Friday morning. Actually, I really want Old Man Marley to score well, so I am going to choose to assume that he not only wears the same outfit as a Phil Connors-style (if that can be a thing a few years before Groundhog Day came out) Christ costume but also because he is just too poor to afford more clothing. So, he not only gets this point but the previous one as well. 9/22

(Speaking of references to Christian mythology, Kate McCallister just told the ticket counter guy in Scranton that she was going to get home to her son even if she had to sell her soul to the devil himself. Then, speak of the devil, John Candy (as Gus Polinski, not Del Griffith from Planes, Trains & Automobiles, unfortunately) arrives. Remember this? 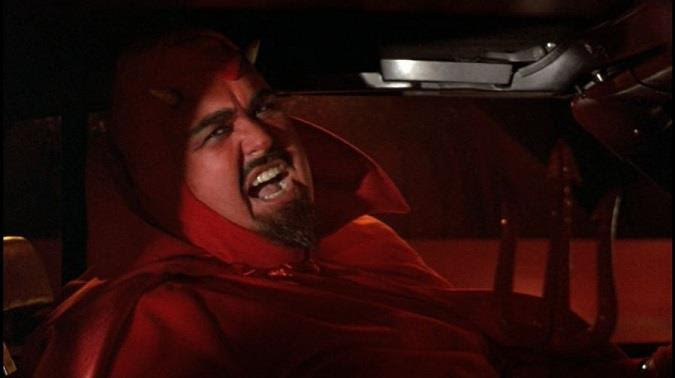 She may have actually sold her soul to the devil. Plus, this is evidence that polka music is evil.)

So, that is all for Kozlovic. I had hoped Old Man Marley would do better. I will give him the bonus point for atonement. It may happen offscreen, but we are specifically informed about how Old Man Marley has something for which he needs to atone regarding his son and a fight they had that has kept them apart. By the end of the film, he has apparently made the phone call Kevin has suggested and made up with his son. I’ll give it to him. 11/25

I would also like to add a new category—and this is really why it occurred to me to even run the Kozlovic scale over the character of Old Man Marley—wounds. Specifically, stigmatic wounds. Old Man Marley arrives at the store (scaring away Kevin so that he inadvertently steal a toothbrush) with a fresh wound in his hand—this is definitely stigmatic. I would like to offer him another bonus point. 12/25

He’s only half a Christ-Figure. Kevin, on the other hand, may be a total Satan-Figure, or at least the Figure of something evil. More on that tomorrow.

Kozlovic, A.K. (2009). How to create a Hollywood Christ-Figure: Sacred storytelling as applied theology. Australian eJournal of Theology 13(1). Retrieved from http://aejt.com.au/__data/assets/pdf_file/0003/158538/Kozlovik_Film.pdf

Larsen, J. (2013, June 18). Man of Steel and the tiredness of Christ figures. Think Christian: No Such Thing as Secular. Retrieved from http://thinkchristian.reframemedia.com/man-of-steel-and-the-tiredness-of-christ-figures