do you remember me?

Near the bottom of the end credits for Life as a House, there is this:

"Whose dwelling is the light of setting suns..."

After a Google search, I cannot tell you who Ramona Evelyn Andrus is. Clearly, she's related to Mark Andrus, who wrote the film, but I can't find anything more specific. The references that come up just come back to this dedication. His mother maybe?

As for the Wordsworth, that's line 97 of "Lines Composed a Few Miles above Tintern Abbey, on Revisiting the Banks of the Wye during a Tour. July 13, 1798," more commonly known as simply "Tintern Abbey." It's an example of what's called loco-topographical poetry. Some other notable examples are John Denham's "Cooper's Hill," Alexander Pope's "Windsor Forest," John Dyer's "Grongar Hill" and Samuel Taylor Coleridge's "Sonnet V. To the River Otter." These poems (and others) use place to explore larger themes, sometimes political, sometimes philosophical... "Tintern Abbey" takes the external location and uses it to explore the internal.

And I have felt
A presence that disturbs me with the joy
Of elevated thoughts; a sense sublime
Of something far more deeply interfused,
Whose dwelling is the light of setting suns,
And the round ocean and the living air,
And the blue sky, and in the mind of man;
A motion and a spirit, that impels
All thinking things, all objects of all thought,
And rolls through all things.

Whether this is God or Nature--the text of the poem implies Nature, but one could easily extrapolate the other--the point is that in nature, thought can be elevated. Like Thoreau living deliberately at Walden, or Phil Connors getting his shit together in Punxsutawney, Pennsylvania. It's not just meditative but commemorative. Wordsworth returns to the Wye River after five years away. Phil Connors returns to Punxsutawney after a year away. Sam Monroe returns to his father's house after years away (well, minus weekends there, apparently... but George and Sam seem so unfamiliar with one another that it's hard to imagine that those weekend visits happened too regularly). And, while George may have gone in the ocean since, the way the film presents it, his jump into the ocean is his return after more than a decade away.

Now, that jump into the water is like a baptism--a bit obvious, but this is Hollywood. Even more so, Sam's leap into the ocean is like a baptism. His acceptance of his acceptance of a new sense of self. Baptism. Graduation. Whatever you want to call it, such a thing is not just about the moment, but specifically about the moment as the hinge between the past and the present, between memory and dreams. In communication studies--specifically coming from Aristotle--there are three basic types of rhetoric or speeches--commemorative, epideictic and deliberative. They focus on the past, the present and the future, respectively. George and Sam (and Robin) are stuck in the past. We are told specifically what George's deal is--in broad strokes at least; his father was abusive, and his father drove drunk and killed his mother and another woman and injured a little girl--and his father used to make him (George) small... He tells Sam,

My dad used to play this game... I never really understood what it was until after he was gone... The game was to make me smaller than he was. Smaller. Always smaller. No matter what. He could be almost invisible as a human being, but I still had to be smaller. So that, if I got good grades in school, then I was a pussy for not playing football, or if I cut my hair for him, it was never short enough. Or if I shaved my head then I looked like a psycho. I never won the game. Never. And if he couldn't make me smaller with words...

Sam, I won't ever hit you. Ever. I don't want you smaller. I want you to be happy. You're not. Not here with me. Not home with your mother, not alone, not anywhere. You're what I was most of my life, Sam. I see it in your eyes, in your sleep, in your answer to everything. You're barely alive.

You know the great thing, though, is that change can be so constant you don't even feel the difference until there is one. It can be so slow that you don't even notice that your life is better or worse, until it is. Or it can just blow you away, make you something different in an instant. It happened to me. Build this house with me. 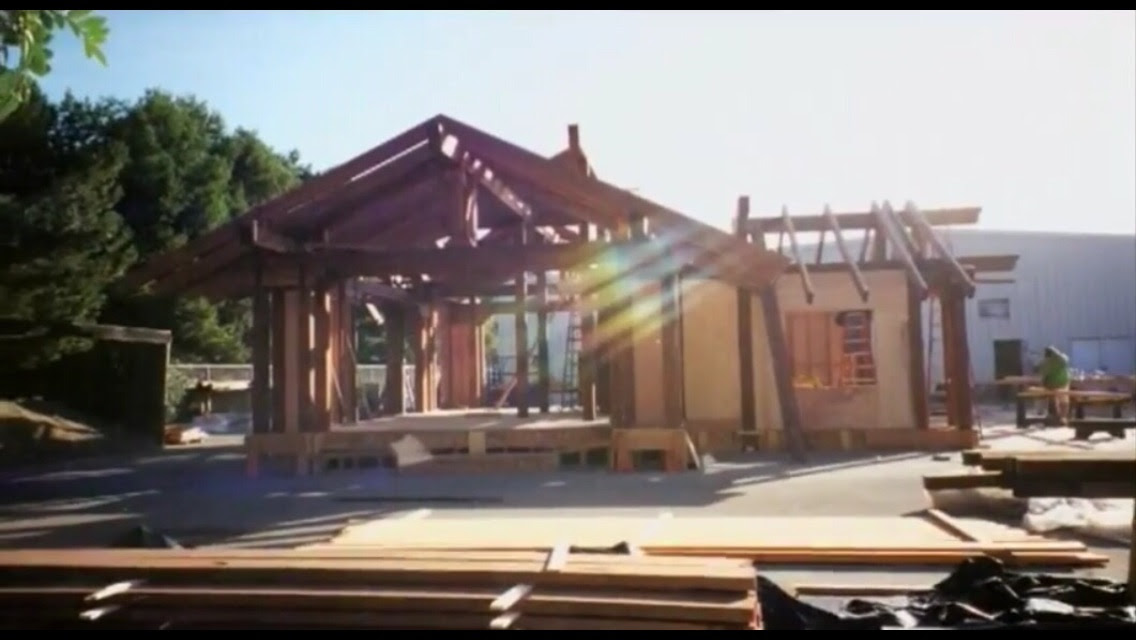 I took that image from a blog on tumblr called "I Love Laah" (Laah=Life as a House). A woman named Sheiva has been posting images and descriptions related to this film off and on for three years now. In her about the blogger bit, she describes her first experience with the film, when she was 13:

On a crisp October day in 2003, I rented LAAH from Blockbuster. Two and a half hours and a whole bunch of tears and laughs later, I had fallen in love. Very few movies have touched me on such a personal level. I saw a piece of myself in every character. I loved the message of following your dreams and appreciating life despite its difficulties. I loved how the movie showed that changes is possible and that if you've been leading a self-destructive life that you can change that.

It's always nice when a movies grabs you on a personal level. I already wrote about when I saw this film for the first time. Sheiva sees herself in Sam. I think I might have back in 2001, as well. The relationship I had just gotten out of had never really gone that well. I had specifically gotten involved with another damaged person because I had convinced myself after the end of my previous relationship that I didn't deserve anything better, that I just needed to choose a person to be with and be with her, no matter how painful. Because being in pain was better than being alone.

I'd still rather not be alone, but not at the expense of my mental health. Alyssa (Jena Malone) here is a sort of symbolic intrusion in Sam's life. (She's also the weak link in the script or the acting, but I don't feel like harping on that.) She's there to represent all of the other people who might break down Sam's barriers. That she pays attention to him despite the barriers he has put up is enough, without anything more, to get Sam to let down his guard. In the year before I saw this film, I had similarly let down my guard. I didn't have the "blessed mind" of Wordsworth in his youth at the River Wye. I had my damaged self, grown up on apocalyptic visions of World War III and the oppressive demands of organized religion. And this film worked as a metaphor for me in that moment in my life because I needed to tear up a lot of who and what I had been for... well, my whole life, really. Getting together with my wife was a new start...

I cannot really remember just how hopeful I was then, if my thoughts were elevated. I know that it felt good. I know I wanted something better than I had before and for a time, I had it. Returning to it, returning to memory--returning to movies--I see it as part and parcel of who I am now, years later. It is the past. But, it is part of me. Like Wordsworth bounding o'er the mountains by the River Wye as a younger man. Like George standing in the ocean holding 6-year-old Sam against him. The past is less like some separate thing and more like something stuck inside the present, something on which we build the future.

In George's case, of course, he cannot build his own future, but as a parent, his son is his future. And, the present is, for him, about repairing the past anyway. Tearing down his father, as Sam puts it. But, importantly, building something up in place of that memory and that pain. He cannot cure his cancer but he can... make up for it, leave the world a better place in his absence than it was when he was alive.

Something we all should wish for.