i am what i say i am

Life goes better when you choose what goes into it. It's so obvious as to be a truism, but sometimes I think we just let stuff happen rather than really make an effort to choose what we let into our lives. The same can be said for this blog, and lately, this blog and my life have been weaving into and out of one another. Thing is, choosing what movies I would be watching this month was difficult. On the one hand, if this were just another month and the end of this second year would just roll right into another year of the same (or something similar), it would be simpler than if this were the last month I'd be doing this. And, I definitely see it like this: there is no taking a break and then coming back later. Just doesn't work that way. (Especially since, a lot of the time this blog is the break from everything else, my space to do what I want, say what I want.) If this were just another month, I've already got one good set of four films ready for a month (but I won't spoil what those are, just in case) and several sets of five or six that need to be wheedled into smaller groups.

So, on the other hand, if this is to be the last month, how do I pick my four films? Do I go thematically obvious and deal in time travel or time loops or self-centered characters trapped in small towns only to learn a lesson about life? Do I go with four of my favorite films--I've actually covered a couple of my favorite films already: Eternal Sunshine of the Spotless Mind and The Assassination of Jesse James by the Coward Robert Ford--and just promote what I like? Or, do I do what I will be doing--go with thoughtful films, bordering on philosophical--be self-indulgent but also put something great into the world before I go?

And, how arrogant was that last one? I do not assume that what I write (or will write) is great, but I hope it to be.

So, I begin with Life as a House, a film about George Monroe (Kevin Kline), who loses his job and learns he is dying on the same day then chooses to build a house before he's gone. I am not dying. Nor do I write about death much in this blog... anymore.

(I've been reading old entries for my thesis, of late, and I'd forgotten how obituaries were a running theme early on. I know that when I was first separated from my wife I was depressed, but I was never suicidal, but I think when I started this blog, the idea of measuring a life in words both appealed to me and frightened me. I don't know if it occurred to me just yet that this blog might be such a measure of me. It is, and it isn't. All the stories, all the poems, all the novels and screenplays and academic papers I have written are just as much of a measure of me, if not more. And not just my writing, but everything else I have ever done and everything I will ever do, all I have thought or will think, all I believe to be true or believe to be false...

Maybe, I think, there is no measure of me. Or of any of us. There is what we present to the world, what the people around us can use to measure us, but that is just a facade. I don't mean that it is fake, but more like the kind of facade on the Universal Studios Tour or in some towns in Westerns (that "fake" town in Blazing Saddles for example), something like reality but... just not reality. We can pick and choose what we put out into the world, just like we can pick and choose what we let into our lives. We can put up a front that we want the world to see. But, not just that. We can put up a front that we want to be who we are in the world... which sounds convoluted now that I typed it. What I mean--and I swear I made this argument for a month back in May (with Eternal Sunshine of the Spotless Mind, Hedwig and the Angry Inch, Toy Story and Stories We Tell)--is this: you are who you say you are. It just comes down to believability and--I don't know--depth.

Make a choice of who to be and run with it.

The whole myth of America--and, poetically, I write this on the 4th of July--is that you can make of yourself whatever you want; all it takes is some hard work. Throw in a lot of luck and being in the right place at the right time, and it's probably true. In terms of finding a career you want, getting a job in that field, succeeding in the stereotypical, societally-acceptable ways. In terms of, you know, personal growth, self-expression--that's easier. Less about luck and more about choice.

George, here, has a nice plot of land overlooking the ocean, and he's got enough money to build what he wants to build. Most of us don't have these things. A lot of us don't even have things we need, let alone things we want. It's not always easy.

But, however difficult, however finite, it is worth living. 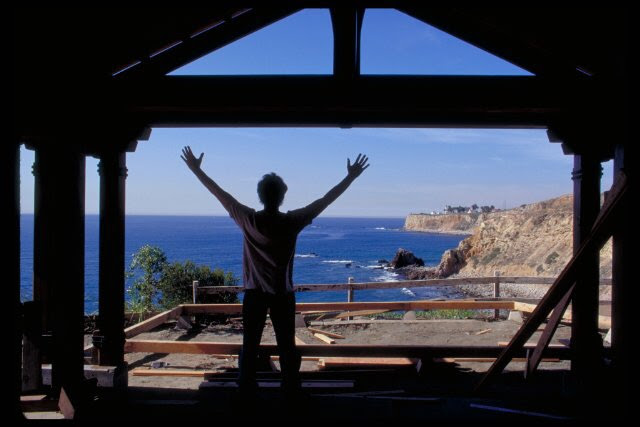