The thing about Everything Is Illuminated is it suggests--at the same time, mind you--that it's never too late to get over your past and your past will always catch up to you. If The Grey was purgatory, this is somehow both heaven and hell... or maybe just another form of purgatory... or maybe just life.

The movie returns us to the idea that life is just stories, the what we choose to remember--how we choose to remember it--matters more than the reality. Stories change over time. So do memories. Each return of a memory is affected by the previous one--that was a detail in the latest Pixar movie, Inside Out that I rather liked, in fact; positive memories turn negative, joy turns sad... and vice versa, I suppose. Bittersweet is introduced. 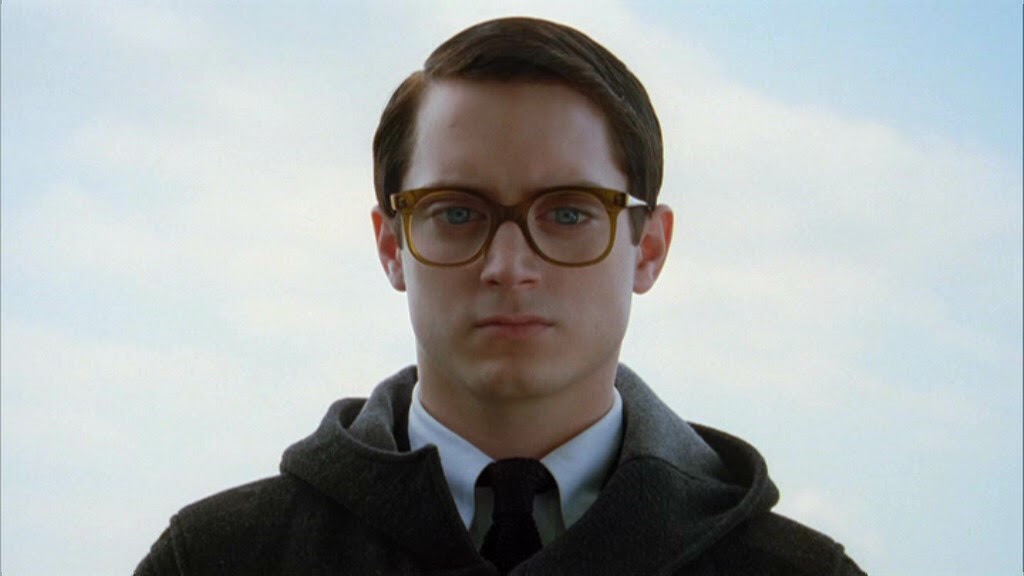 Everything Is Illuminated is based on Jonathan Safran Foer's first published novel. It is, of course, about a young man named Jonathan Safran Foer going to the Ukraine in search of family history, specifically, the woman in a photo with his dead grandfather. The real Foer did travel to the Ukraine to find a woman in a photo. But, in reality, Foer never found the shtetl of Trachimbrod, nor the woman in the photo. He wrote the fictional version, in which--SPOILERS--he does find Trachimbrod and the woman in the photo, reportedly in two-and-a-half weeks, then edited it for two-and-a-half years.

(My first novel, which is really not very good, was written in one month... I considered turning a piece of my life into a novel once, taking the failed relationship that had me living in a trailer in Arkansas and injecting it into a metaphorical story involving ghosts. It was called Furnished Apartment. Because I felt it wrong to adhere too closely to reality, I traded certain personality traits between me and the Miranda, the woman I was living with in Arkansas. But, these personality traits ended up bogging down the narrative almost immediately, and I never got very far. It is one of several unfinished stories I have.)

In a study guide for the book, it discusses "the arts and the Holocaust." Everything Is Illuminated deals not just in the leftovers but in events within the Holocaust. That study guide says, "Many writers and critics believe that writing is a key way to preserve our collective memory of the horrors of the Holocaust so that it is remembered but never repeated." I would go further--not in the direction of the Holocaust, but in the direction of writing to remember. I look at old pieces I have written--lately, blog entries from the first year of this blog, early entries nearly two years ago now--and I can remember, sort of, being there, writing that. But, I also cannot, and it serves as a window into a specific time and place, words as memory. That study guide quotes "German philosopher Theodor Adorno [who] claimed that 'writing poetry after Auschwitz is barbaric.'" It continues:

I'll get to Adorno in a moment [no I won't], but first the study guide. I know that there are those who might make the arguments here, but I see it like this: if you think that art can only beautiful, or rather that only beautiful things can be art, your view is a little flawed, at least on a literal level. Some very ugly things can be art... and then, I supposed, become beautiful, but the phrasing here implies that something must be beautiful to be art, not that something is beautiful because it is art. I disagree. For example, one of my favorite paintings is Pablo Picasso's "Guernica."

I would not call it inherently beautiful. In fact, the ugliness of it, the misshapen forms and just as misshapen empty spaces is quite deliberate--enough has been written on "Guernica" that I will not bother getting into much detail. I would probably just say something stupid. My point is, the painting evokes the ugliness of the bombing of the Spanish village of Guernica during the Spanish Civil War.

No, not too far. I would never suggest that art needs boundaries as such. But, some films, some stories take things so far that it is hard to discover meaning any longer. Take my review of A Serbian Film a few years back. That is a difficult film from which to take meaning. But sometimes, the meaning you can take might have nothing to do with the content of the film or the novel or the poem or the painting, but rather in you, in the people around you, in the time and place where the particular piece of art was created. (I spent this past January, for example, dealing with action movies from the 1980s as markers of that specific time, and a specific place: late-Cold War America.)

That art is cathartic, that it may be barbaric to make art after real-life horror... that will have to wait until tomorrow.