making something of this life

The day before (or was it the day of? I know it's the first bookmark in my Into the Wild folder on Chrome) I was going to start watching this movie for this blog, someone linked to an article on RobGreenfield.TV called "How to Travel America For Free (without mooching)." He left his home in San Diego with $2000 cash and gave away his last $421 on August 12--this act he calls "a leap of faith in humanity." The article was published September 26. Greenfield (2014) summarizes the experience:

This experience is about much more than just not spending money. It's about showing that you and I can be contributing members to society whether we have money or not, It's about showing that there are much more rewarding ways to live than just throwing money at every situation. It's about living a life that is truly beneficial to the earth, my community, and myself. It's about being more involved in our communities and treating each other with respect. And it's also about teaching you how to live with less money so that you can follow your dreams and live independently of corrupted systems that don't serve your best interests.

Though Chris McCandless doesn't seem as interested in the communities part, the rest fits McCandless' adventure pretty well. Had he made it back and written that book he mentioned to Wayne Westerberg, it might have a message like Greenfield's. He might live off the grid and dumpster dive and write about that, too, just like Greenfield.

To be fair, had he come along later, maybe he'd be okay with it. I mean, Greenfield uses the term "off the grid" yet writes online articles. The potential for contradiction be damned; get the message out. (And, I don't mean that last line as a criticism. Seriously, such a message needs to be spread.)

In his "Author's Note" at the start of his book, Jon Krakauer admits,

I won't claim to be an impartial biographer. McCandless's strange tale struck a personal note that made a dispassionate rendering of the tragedy impossible. Through most of the book, I have tried--and largely succeeded, I think--to minimize my authorial presence. But let the reader be warned: I interrupt McCandless's story with fragments of a narrative drawn from my own youth. I do so in the hope that my experiences will throw some oblique light on the enigma of Chris McCandless.

I will take this in reverse.

I can appreciate that last bit because, as I have argued before in this blog, will argue again (I'm sure) and as is integral to my Master's Thesis, including the subjective, including my own narrative from time to time* in this blog is not entirely self-indulgent but potentially revelatory in regards to understanding the text in question. The text today is Into the Wild. My interpretations of said film must be taken in light of what follows.

(* I have learned in my recent coding of old blog entries that personal anecdotes and stories are present in the majority of entries, more so than from time to time would imply.)

In an interview with NPR, Krakauer elaborates on his impartiality. He explains:

When I was his age, when I was 23, a year younger--[Chris] was 23 when he died. When I was 23, I went to Alaska by myself into the glaciers of the coast range and climbed a mountain by myself. It was incredibly reckless, incredibly stupid. But I was lucky. And I survived, and I came back to tell my story.

When I was 24, dealing with a bout of a depression and an office job that had no appeal for me, I saved up a few paychecks and planned to quit my job and go on a roadtrip of my own. Ostensibly, my roadtrip would explicitly involve people as much as places--the internet as we know it today was still growing and my introverted, late-blooming self had made a lot of friends in this burgeoning medium. In planning my potential roadtrip, I marked on my map where a few of my best online friends lived and I imagined meeting them in person along the way, as I got as far away from a dayjob as I could. At least for a little while.

At 24, I would have loved to be on the road like Chris McCandless, would have loved being in the wilderness for a time, just separating myself from all of this modernity and technology and--let's be frank--society. I lacked the courage. I wasn't as reckless as I would have liked to be.

Plus, I met a girl online and ended up moving out of California for a few months later that year. At the time, that seemed like a better idea than wandering around on my own.

Too bad I couldn't have done both.

Still, I wanted to balance my wanderlust with human interaction, go meet in person people I knew online. I didn't want to just be out on the road, in the wild, on my own. 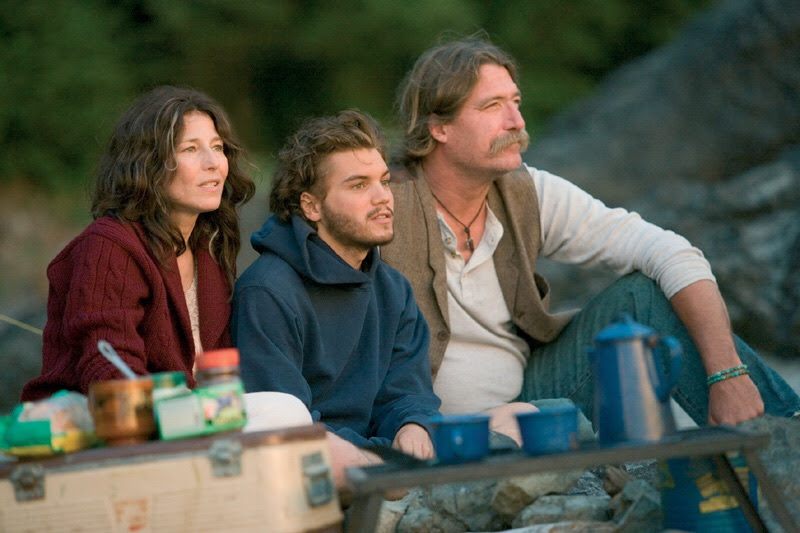 But maybe that was deliberate. Get away to regain perspective. Leave as the damaged young man he was after growing up with abusive parents. Return as someone new.

That is the romantic idea here. That we can reinvent ourselves by going away for a little while. I've written about the Pirahã in this blog before. When a Piraha wants out of a relationship, he or she just leaves his or her partner, leaves the village for a few days and upon returning, is considered no longer attached. That simple.

And, of course, I'm a fan of the idea that one can reinvent him- or her-self.

Wanderlust. A quest for a new identity. The need for human contact and companionship... Sounds like everyday life to me.