turn around and look at that

Commentary track--director Joe Carnahan with editors Roger Barton and Jason Hellmann. They're drinking scotch--"watching The Grey the way it should be." Me too.

Referencing Anne Openshaw who plays Ottway's wife (and who only says three words in the film), Carnahan says it's a lesson for filmmakers, tell your actors to shut the fuck up. Because with only three words she has a big presence in the story.

First wolf, the one Ottway shoots on the job, is CGI first then a practical effect, with a bellows for its lungs, with a guy blowing into a tube up its ass. Carnahan likes his swear words about as much as the characters in the film.

Joe Anderson, who plays Flannery, thought that Carnahan hated him and would fire him after his first day. Carnahan says Anderson is not the actor that he hated. The not so subtle implication being that he did hate one of the actors.

Obvious stuff, but worth mentioning: they like James Badge Dale for what he gave the film with such a small amount of screentime; he's Lewenden who dies just after the crash.

Took 72 takes to get the shot of the cold plane interior with the breath visible just right.

Carnahan: "If there's a better plane crash in a movie, I wanna see it... Only because these guys cut the shit out of it."

Liam in the snow just after the crash--about minus twenty degrees. The redness of his face is not makeup. Carnahan had boots rated for minus twenty-five and had to get rid of them because he was feeling the cold through them after fifteen minutes.

The editors make jokes about how cold it looks--because they edited from a studio in Los Angeles; they were nowhere near that cold.

They were never trying to capture wolf behaviour accurately, Carnahan says. They are supposed to be a force of nature. One of the editors says, very slowly: MET-A-PHOR.

The wolves in the dark bit the night after the crash--initially, it was just the alpha there, but that didn't work. Jason Hellmann added the other eyes. Carnahan likes the idea that they are "spectral beings" there, eyes in the dark. As opposed to the full practical alpha that they had for shooting. 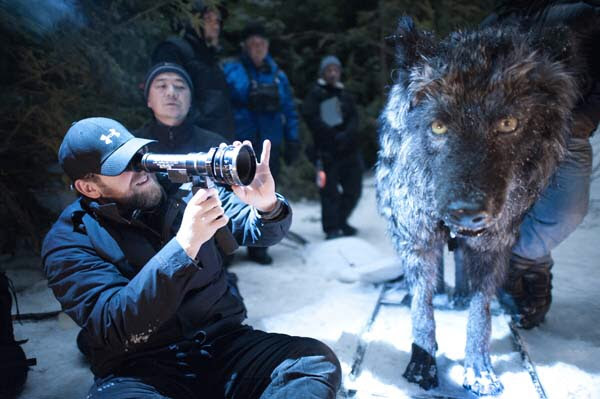 Carnahan doesn't mince words regarding PETA and the humane society complaining about the film; he says, "The myopic view of this film is that we were mean to wolves, which I think is absolute bullshit and nonsensical and absurd... I don't mind if you protest something. See it before you, you know--because it's those kind of attitudes, honestly, that got... books burned in Berlin in the late 30s."

Carnahan calls the blood in the wolfprint shot "as Spielbergian" as the film gets.

I find myself just listening. A lot of the commentary is expected stuff, talk about what it means to be a man, reference to a whole lot of dialogue that didn't survive the editing process. A lot of scenes overwritten, saved by great performances and editing. Carnahan sees the film as a thinly veiled art film, and says it never should have been #1 at the box office. The editors both disagree.

A lot of conversation on Diaz' last scene. The long take of them walking. The snow was all real. The editors couldn't add any "pace" to the scene and Carnahan shot it so it could breathe. It needed to breathe. This was Diaz sacrificing himself to give Ottway and Henrick a chance. The first names. A return to masculinity; Diaz' death is about his strength and resolve, not his weakness. And, Carnahan says, as the camera moves in closer behind Diaz, "this is most spiritual moment in the film."

"God helps those who help themselves." - Carnahan after Ottway gives up on God with "Fuck it, I'll do it myself."

The photos in the wallets are all real. Dermot Mulroney and his actual daughter, for example.

Ottway forms the wallets into a cross. There's no clean shot of that so I hadn't noticed. Also, with the last wallet, no family photos, Ottway closes his hands around it as if in prayer. This was Neeson's move, not something from the script or from Carnahan.

Finally--though I haven't talked about the end of the film yet--Carnahan, Barton and Hellmann all agree the film could end no other way. Anyone who was expected a fight between Ottway and the wolf after watching the rest of the film, Carnahan says... well, they missed the point.

That's the ending before the credits. Carnahan calls the post-credits shot "purely artistic." It doesn't answer any questions.