before you die you see the ring

The Ring is 1 hour 55 minutes in length, give or take a few seconds and including the end credits. Numbers below will be approximations. It’s time to break down the script structure before I go. Before I move on to another film for the next seven days, that is.

Meanwhile, I wanted to deal with Martin’s (2009) notions about Ringu and its place in the timeline of the horror genre, and by extension, where The Ring fits into that same timeline.

Martin places Ringu—the American importation thereof, rather—into a postmodern horror revival that includes The Sixth Sense and The Blair Witch Project, and to a lesser degree Scream. These are all horror films that are more suggestive than explicit in their violence. (Realize, for example, the only actual violence in The Ring is committed by regular, living, breathing humans, not by the deceased Samara.)

The first 10% of the film should be setup, and the “Small Catalyst” should occur about 10% of the way in, according to Dyer (2010). At about 11 ½ minutes in, Rachel finds out from Aidan that Katie knew she was going to die. Tying this back to the other topic at hand, it’s interesting that Samara doesn’t really kill anyone. At least it doesn’t seem that way. Her presence is simply so frightening that people die from fear. There is some direction in this affect, of course, since in the opening sequence, Katie dies but Becca is just driven a bit insane. Similarly, in the opening sequence of The Ring Two, Jake dies but Emily is just driven a bit insane.

The “Large Catalyst” comes around the 17%/17 minute mark—in The Ring, just seconds past the 17-minute mark, random teenage boy who won’t be seen in the movie again informs Rachel that Katie’s boyfriend Josh supposedly killed himself the same night that Katie died. It isn’t Katie’s mother’s request that Rachel look into things that gets Rachel interested, it’s the intrigue of the tape and the multiple deaths. Just like Rita Hanson in Groundhog Day, she just wants her story. It isn’t a matter of life and death until later.

Meanwhile, Martin (2009) separates the “graphic and suggestive horror” as follows:

Critics who privilege restrained horror clearly present it as psychological and present the thrills of graphic horror as largely concerned with shock and revulsion: the thrill of explicit horror is supposedly visceral, addressing physical, bodily reflexes. Restrained horror is seen as engaging the mind, and activating the imagination (which does much of the work of producing fear), while graphic horror is clearly seen as below conscious thought, merely a matter of automatic bodily reflexes. (p. 39)

“Plot Point One” comes about 25% of the way in, or as much as 28 minutes in for The Ring. At 25 minutes, Rachel’s watching the tape for the first time. At 25:16 the phone rings. Dyer (2010) tells us that our protagonist “must be now on a clear path toward the pursuit of his external goal. Often, the location will change at this point to visually represent the protagonist leaving the comfort of his ordinary world for the dangers of this new extraordinary world.” Rachel has, of course, already left that comfort and she watches the tape at the Shelter Mountain Inn.

Amusingly, Martin (2009) quotes Kim Newman, saying, that Ringu “takes subject matter a U.S. movie (such as Final Destination) would have treated with giggly melodrama and plays it with high seriousness” (p. 43). Newman didn’t realize, of course, that an American remake would be along in another 2 years (Newman’s piece was in Sight and Sound in 2000).

The next item on Dyer’s (2009) breakdown of the screenplay structure is “Pinch One,” an event that “complicates the protagonist’s pursuit of his external goal. This event often reveals new information to the protagonist that will cause him to go in a new direction.” “Pinch One” comes around 37.5% (or, here, 42 minutes) in. I figure, though, that Aidan watching the tape is The Ring‘s “Pinch One” and that doesn’t come until almost 50 minutes in (which makes it more like an early Midpoint than a late Pinch). At 42 minutes, Rachel was researching lighthouses, discovering information about Anna Morgan.

For me, I’m not sure there was ever a big gap in horror films, but when I try to think of horror films in the early 90s, all that really comes to mind are late sequels to long franchises (e.g. Jason Goes to Hell: The Final Friday (1993)).

(I think my problem with remembering when some movies came out, especially early- to mid-90s horror films is that I and the youngest of my sisters spent a lot of the 90s renting horror film after horror film, so the 90s is a big horrific blur for me.)

So, I guess Martin (2009) is correct in suggesting (though it is certainly not his original idea) that horror as a genre experienced a postmodern revival late in the 90s. When Scream came, for instance, the slasher film it was both parody and homage to was pretty much left behind. Of course, then, along with Scream came less sophisticated films like I Know What You Did Last Summer, and Scream also eventually led to the Scary Movie parody series.

(Note: the original title for Scream was Scary Movie. I remember reading about it in Fangoria well before it was released and looking forward to a new Wes Craven movie.)

Aidan’s watching the tape may be the Midpoint if we don’t count the end credits in the runtime. At this point, I am not familiar enough with The Ring to know how long those credits are, so I must mention that at the actual Midpoint, 57 1/2 minutes in, there’s a horse going crazy on the ferry and shit just got real. Dyer (2010) tells us, “Often at this point, the protagonist and antagonist will change roles so that the character who was more passive now becomes the aggressor.” The horse is not necessarily deliberately driven to madness by Samara—but, then again, Samara is not necessarily the antagonist—but the horse going crazy like that does mark a change in tone for Rachel’s journey.

What is interesting to me about first Ringu (and its popularity among horror fans when it came to America) then The Ring four years later is a certain comfort not only with being “restrained” in its presentation of horrific elements (as Martin (2009) describes it) but also comfort with outright ambiguity. The Ring certainly tries to turn most of the images in Samara’s tape into literal things along the way (not to mention explicitly explaining when and where this particular tape was made), while Ringu is not so deliberate, but some images are left behind—the severed fingers in the box, for example—serving only to add to the ominous ambiance.

“Pinch Two” comes around 62.5% of the way (here around 71 minutes). Dyer (2010) tells us there “should be a major plot event that pushes the protagonist in a new direction, usually because of the revelation of new information.” This is when Rachel talks to Dr. Graznik and learns about Samara.

But, even more than leaving a lot of explanation behind (or providing it almost as an afterthought later—the explanation for the “seven days” limit, for example, is explicit in The Ring but on repeated viewing seems like less a vital revelation than just one more detail to the Samara story) what is refreshing about Ringu and The Ring is the ending which is not only downbeat but deliberately incomplete. Aidan asks what happens to the person they show the tape to, but Rachel doesn’t answer.

“Plot Point Two” should come about 75% of the way in, here about 78 minutes. That’s right in the middle of the second confrontation between Rachel and Richard Morgan, ending in his suicide, which leads Rachel and Noah to Samara’s loft which leads them back to the Shelter Mountain Inn, so this event definitely sets up the rest of the movie.

Wee (2011) refers specifically to how Ringu leaves out explanation for the tape, and anything past one bit of speculation regarding Sadako being the child of some malevolent sea spirit, in suggesting that gaps in the information specifically fit with

the Japanese Buddhism-derived aesthetic concept mujo, which can be translated loosely as the practice of ‘leaving things incomplete. In Japanese art, mujo encourages deliberately leaving images unfinished so that individual viewers are free to ‘complete’ the images according to their own subjective aesthetic preferences. (p. 48)

Dyer (2010) doesn’t describe the third act twist, but The Ring definitely has one. In what should be the end of the ongoing plot, Rachel finds Samara at the bottom of the well and sets her free. But, it turns out the story was not about saving Samara; in fact, there was good reason Samara was in that well. Anna Morgan was the second mother to try to kill Samara (and Rachel would figuratively be the third in The Ring Two) for a reason.

Rachel (and we in the audience watching) assumed a specific end was possible, something she could do to stop Samara. Like Sam and Dean burning the bones of a ghost in Supernatural or similar goings on in many another ghost story, destroying the remains or, in this case, giving them a proper burial, should solve things. Wee (2011) describes “Hollywood’s commitment to a ‘goal-oriented protagonist’ and the need for a clear (read ‘rational’) cause-and-effect progression culminating in neat narrative closure” (p. 53).

(Not to suggest that Reiko is not also seeking closure in Ringu; everyone wants closure.)

Martin (2009) points out that critics (particularly British critics, though I’m sure the same was true of American critics at the time), “Rather than trying to understand [Ringu] in terms of it’s Japanese-ness, or its universality... (mostly) understood the film simply in terms of Western traditions” (p. 49). Even with The Ring, we have to remember that it is not an originally-American story. It is a Japanese story with American details (just barely) grafted on.

Of course, even better yet, let the film stand on its own as well. Look at it in terms of horror films in general, look at it in terms of Japanese films, of Japanese horror films, in terms of film in general, and look at it on its own terms. The Ring has its flaws, some painful dialogue here and there, some bits of acting that could have used another take, but overall, it makes for a well-constructed horror experience, borrowing from Japanese cultural details but painting over them just well enough that even a particularly Amerocentric audience member can still enjoy it. 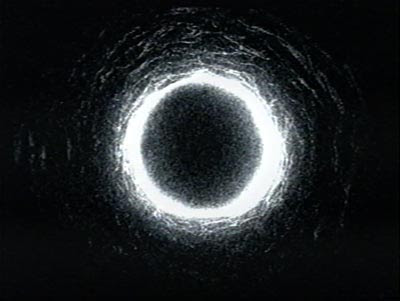