Going to keep it simple to end this week of The Sixth Sense. Going camping for the weekend so I don’t want to linger.

(I will be blogging about another film tomorrow. A brief outing to Starbucks in the afternoon for some wifi away from the campsite.)

The Christ-Figure anyway. I will have to track two separate scores today, because I want to measure both Malcolm and Cole. Primarily Malcolm.

The first of Kozlovic’s 25 “structural elements of the cinematic Christ-Figure” is that the figure must be tangible, visible and colorful. That’s an easy one for most any character. I’ll give both Malcolm and Cole the point. (M:1,C:1)

Structural element #2: being the central protagonist. It might be hard normally to give this one to two characters in the same film, but both Malcolm and Cole do have complete story arcs. Malcolm’s starts one scene earlier and ends one scene later but I’m fairly sure Cole ends up with more screen time to make up for that. (M:2,C:2)

#3: Kozlovic quotes Jesus, saying, “I am from above... I am not of this world.” He tells us that Christ-Figures are “typically outsiders and somewhat vaguely defines as ‘from above’ or ‘beyond’ ...they are literally in the world but not of the world” (p. 6). For Malcolm, this one is easy. He is still in the world but, though he does not realize it, he is no longer of the world. He has been separated from the world by death. For Cole, it’s less literal. He is definitely an outsider. Just watch how he nearly runs around the city in his first scene. He is afraid of interacting with, well, anything and anyone. He is literally of the world but deliberately not. I’ll give this one to both of them. (M:3,C:3)

#4: Christ-Figures “usually arrive onto the scene through some from of deliberate outside intervention, sometimes by a distant God-figure” (p. 6). While we should not assume that Malcolm gets to be a ghost because of, say, God, I think we can give him the point for this one simply because he did not choose to be where he is at present. Vincent Gray shot him, and Malcolm has fashioned the existence he can out of what’s left. Cole, though—I can’t give him this point except maybe—and it’s a stretch—after Malcolm has become the outside intervention, getting him to start helping the ghosts. (M:4,C:3)

#5: Christ-Figures usually have some sort of dual-identity, “one mundane and the other fantastic” like a superhero (p. 7). Malcolm gets this point because of the twist—he appears mundane, normal, but turns out not to be. Cole gets this point because he appears (not to us but to others in the film) as a relatively normal, but clearly troubled, little boy. But, he is much more than that... actually, Cole just told Malcolm that everybody else (other than his mother) thinks of him as a freak, so maybe he doesn’t appear so normal. (M:5,C:3)

#6: Christ-Figures are “very special, rare and unusual beings although they typically appear as normal humans doing mundane activities” (p. 7). This one is close enough to the previous element that Malcolm easily gets the point. It is also just different enough that I must give it to Cole as well. (M:6,C:4)

#7: Christ-Figures have their entourage, not always 12 people but a circle of “intimate friends-cum-associates.” Neither Malcolm nor Cole get this one. (M:6,C:4)

#8 involves the “mystical age of ‘thirty.’” Neither Cole nor Malcolm is thirty. However, Malcolm may qualify because he was treating children by 1987when he had Vincent Gray as a patient. And, Bruce Willis, and by extension, Malcolm Crowe, was 32 in 1987, so he very well could have begun his “‘divine’ mission” when he was 30. Let’s give him the benefit of the doubt. (M:7,C:4)

#9 involves a Judas-Figure. Malcolm may think his wife is cheating on him—Kozlovic says the Judas-Figure “betrays their friends for essentially unwholesome reasons” (p. 8)—but Malcolm is wrong. Can’t give this one to either Malcolm or Cole. (M:7,C:4)

#10 involves a Mary Magdalene-Figure, a “sexually tagged” woman who does not know how (or perhaps is unable) to express her sexuality. Anna Crowe fits this one, since she is tempted to express her sexuality with someone new but still clearly has feelings for her dead husband, so I’ll give this one to Malcolm. Cole is different. Kozlovic does not include a Virgin Mary-Figure in his elements or Lynn Sear, I think, would qualify. A single mother struggling to raise her child, working two jobs—that’s sacrifice enough to count for something. But, I’m not sure I can count motherhood, necessarily, as a “sexual” tag as Kozlovic means it. (M:8,C:4)

#11 is a John the Baptist-Figure, one who “prophetically points the way” to the Christ-Figure. Malcolm could almost be this for Cole, since it is Malcolm who ultimately convinces Cole to listen to the dead people. It is not prophetic but Malcolm certainly points the way for Cole if not to Cole. Cole is behind and I’m feeling generous, so... (M:8,C:5)

#12: I’ll just quote Kozlovic outright here. “One of the ultimate and unmistakable identifiers of Christ-figures is when they ‘die,’ frequently cruelly and then miraculously come back to life again as good-as-new, if not better” (p. 9). There’s no way I can’t give this to Malcolm. But, while Harty (2000) may call Cole “reborn” after he helps Kyra, I can’t give it to him. (M:9,C:5).

#13: “Christ’s holy death resulted in triumphal victory, even if it seemed a Pyrrhic victory at the time” (p. 9). This one would be iffy, at best, if I gave it to Malcolm. While there is some triumph in Cole’s story—symbolized by his pulling Excalibur out of the stone—I’m not sure there is in Malcolm’s. Together, maybe, they share the triumph. It belongs to Cole but Malcolm makes it happen. (M:9½,C:5½)

#14: “The sacrifices made by Christ-figures specifically benefit others and are based upon higher principles, although these others are usually of ‘lesser’ worthiness, talent or power” (p. 10). If I wrote about the classist undertones in The Sixth Sense (see below), then I might call Cole one of the “lesser” folk to Malcolm Crowe, at least how Malcolm and those in his class might see it. Malcolm’s (and Anna’s) sacrifices certainly benefited others. And Cole’s will benefit others. I’ll give this one to Malcolm, but not Cole. (M:10½,C:5½)

#15: “Christ-figures frequently choose sacrifice out of their newfound knowledge, status, position or cosmic mission requirements” (p. 10). Malcolm chooses to help Cole because he failed Vincent. He chooses, as he must see it, to sacrifice his marriage to help others. He may not quite know what his new status is, but that doesn’t change his choice. (M:11½,C:5½)

#16: Christ-Figures are accused of crimes they have not committed. This doesn’t fit Malcolm at all, but Cole’s being seen as a freak by everyone when he has good reason for all of his behavior fits this one. (M:11½,C:6½)

(Worth noting, both Lynn Sear in The Sixth Sense and Rachel Keller in The Ring Two are accused (the former more implicitly than the latter) of abusing their sons, when neither one has done it. One Christ-Figure point for both of these mothers.)

#17: the cruciform pose. Aside from seeing Christ on the cross in the church where Cole likes to hang out (plus at least one of his stolen statues is probably the same), in a throwaway scene that adds nothing to the plot and almost nothing to the story (really, it just adds an extra little detail to the relationship between Cole and his mother), Cole puts his arms out in something close to the cruciform pose. Even dying on the bed, though, Malcolm never takes on this pose. (M: 11½,C:7½) 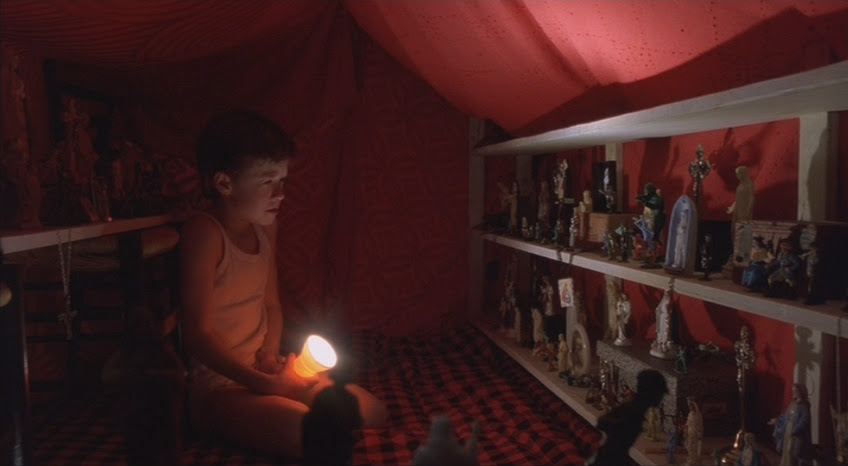 #18: cross imagery. That church gets this one for Cole for sure. It isn’t all cross imagery, but there is a lot of religious iconography. Malcolm is not as clear cut; he only goes to the church because Cole is there. But, he does go there. (M: 12½,C:8½)

#19: miracles. Cole takes this one. Malcolm’s ghost-hood doesn’t seem so miraculous because there are numerous other ghosts in the film. (M: 12½,C:9½)

#20: Christ-Figures often appear as “bumbling simpletons, klutzs [sic], nerds, mentally unbalanced, or fools” (p. 12). At first, I didn’t want to give this one to Cole; he is not a simpleton or a klutz. But he does appear a bit nerdy when he wears his father’s large-framed glasses, or when he wears that mismatched suit to Kyra’s memorial. And, he clearly appears mentally unbalanced to many people throughout the film. (M:12½,C:10½)

#21: pronounced poverty. Cole and his mother are not well off. She works two jobs and they seem to be barely scraping by. I wonder if their apartment is cold not simply because dead people visit often but also because Lynn Sear simply cannot afford to pay for heating. (M:12½,C:11½)

#22: clothed to look like Christ “in his iconic white toga.” Cole’s Young King Arthur costume comes close. And, I gave Phil Connors this point—I doublechecked; I almost gave him this one—for always wearing that long coat, so I could give Malcolm this one as well; he never does change his outfit, only which layers he’s going with at any given time. I’m feeling generous. (M:13½,C:12½)

#24: verbal cues like “My God!” or “Jesus Christ!” While there are a couple of these in The Sixth Sense one is said by Malcolm himself, so I can’t count that. One is a response to Vincent Gray, so I can’t count that. But one is a response to Cole. He tells his mother that a lady died in the accident ahead and his mother’s response: “Oh my God, and you can see her?” Point to Cole. (M:13½,C:13½)

#25: The tie breaker is in the names—getting themselves some J.C. action. (Interestingly, Kozlovic mentions James Cole, Bruce Willis’ character in Twelve Monkeys.) Malcolm Crowe and Cole Sear. Neither one gets this point. They end with a tie. And, separately, neither one makes a great Christ-Figure. But, scored together…

Having finished my week with The Sixth Sense, I lament that I had no day to write about Shyamalan’s original plot—Harty (2000) describes it thusly:

In an interview [in Creative Screenwriting magazine, but I can’t access that source directly at the moment] about the genesis of the film, Shyamalan indicated that the screenplay’s first draft was built around the crimes of a serial killer. The boy saw the killer’s victims, and then he helped in tracking down the killer. (p. 62)

Nor did I have an entire day to write about classist notions in the film—Malcolm and Anna obviously quite well-to-do, Cole and Lynn obviously not, Malcolm come to Cole’s rescue... but then Cole paying it forward to the seemingly well-to-do Kyra Collins. And, I just noticed, at the birthday party—clearly at a rich family’s house—another mother doesn’t even know who Chuck E. Cheese is when Lynn mentions him. But, there are always other movies with classist themes.

Or Anna’s description of Malcolm’s “gift” fitting Cole to a T.

Or how Lynn and Cole invent fantastic aspects of their day when recounting their activities to each other.

Or why the hanged ghosts are still hanging when others get to walk around… which may be related to the class issues.