pick a card, any card

The ordinary becomes extraordinary, even scary, in The Ring. Not just the videotape (and by extension the VCR), but the telephone and its ring. That opening sequence, with Katie's back-and-forth as to whether or not there is a tape, whether or not she watched it, whether or not she's dying--it turns serious when the phone rings (only to have yet another double back since it's just her mother calling). Similarly, in the opening sequence of The Ring Two, Jake is horrified by the ring of the phone and so are we, on some level, even though we know better--Samara does not call you when she's about to kill you. She calls once, right after you watch the tape.

The ordinary becoming a danger--that's anxiety over technological ubiquity turned into a horror film. Well, technological in terms of the VCR and the telephone, and ultimately the television itself. But also the ladder.

But, I don't even want to write about today. I will forego that topic by simply pointing out that the house phone that rings so loudly and the VCR are both becoming things of the past. Samara needs to get with the times if she wants to kill more of us. She needs Instagram.

What I want to talk about is something that came up with Groundhog Day more than once--the Tarot. I don't assume that the cards the Shelter Mountain Inn manager shows were planned, but just in case, and just because it's fun, let's see...

The first card we see (and the second card he pulls out later) is the Four of Clubs. This would correspond to the Four of Wands in the Tarot. 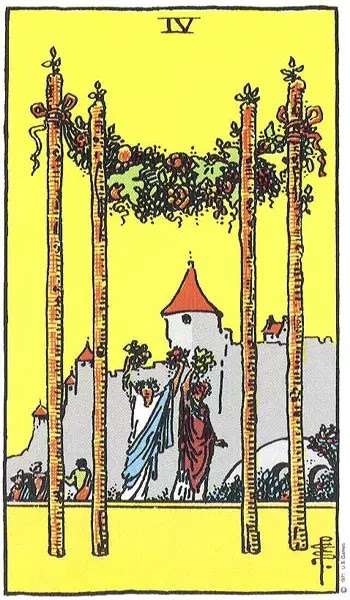 Biddy Tarot tells us this card "represents a time of fulfillment and satisfaction at the attainment of a goal." The Four of Wands "heralds celebration, good times, a happy and harmonious home environment and good news" when it is upright. I think it's safe to assume (though difficult to tell with a regular playing card) that the Four of Clubs was upside-down. Reversed, the Four of Wands "suggests there is a lack of harmony or a breakdown in communication in your family or home... There may be an external threat to the peace and happiness you once had in your home."

Given the ending of The Ring, I particularly like this line: "You may be placed into a temporary situation which appeases your immediate concerns but does not yet solve the longer-term issues." SPOILERS, you know, for a 14-year-old movie: first, Rachel and Noah think they've solved the temporary situation (their seven-days limit), and also the long-term situation (Samara's vengeance). But, when Rachel learns they failed at the latter, she has to solve the longer-term problem all over again... by passing it off to someone else, like the Gypsy Pie in Thinner with the purpurfargade ansiktet inside. And, having passed it on, the Four of Wands can be turned around, so it can symbolize "a time of peace and joy in life that come as the result of often difficult and challenging effort.

Rachel's actual card is the next one we see: the Nine of Diamonds. In the Tarot, that's the Nine of Pentacles. 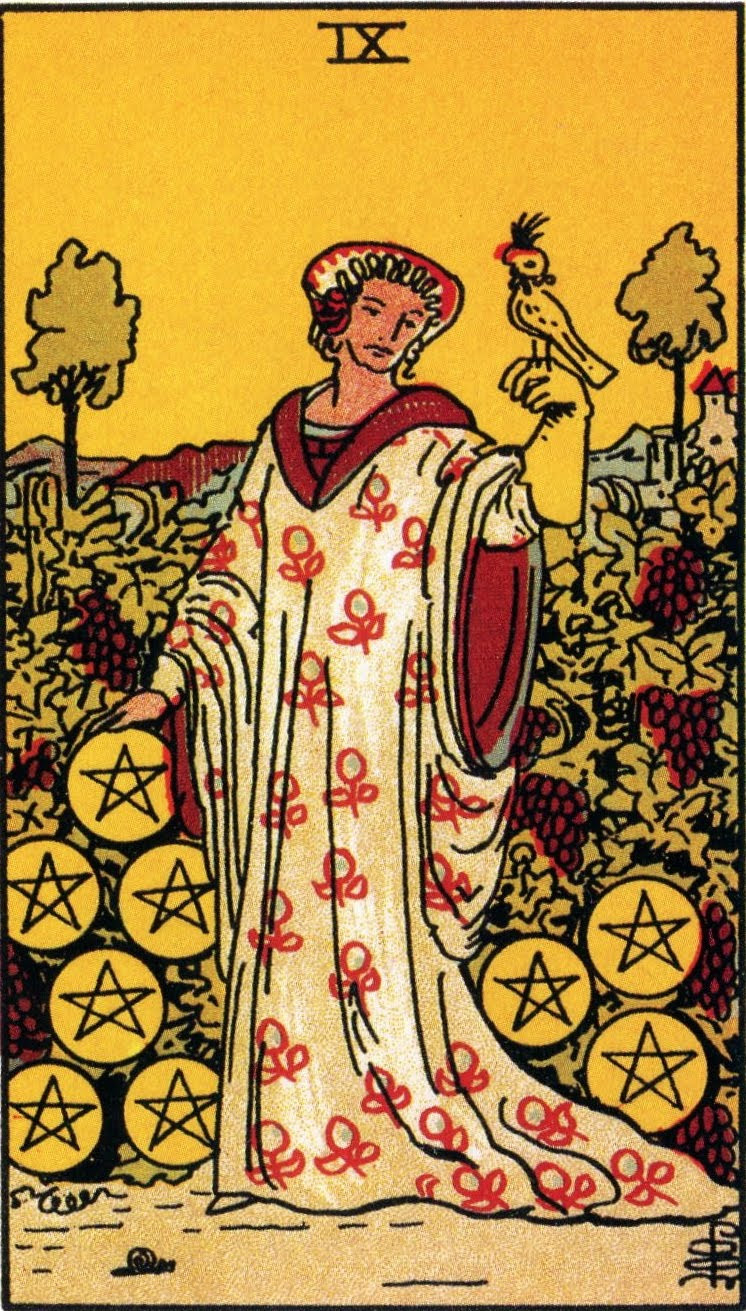 Biddy Tarot says, "There is a general sense of peace, satisfaction, and the fulfilment of a creative venture or personal investment in the image of the Nine of Pentacles that offers a more permanent, lasting achievement as the result of one’s own efforts." Let's skip to the reversed version because it amuses me.

See, reversed, the Nine of Pentacles can mean "an over-investment in work... working long hours at the detriment of your personal life." Rachel (and Reiko in Ringu) neglects Aidan (Yoichi) because of her work. "This is a good time to return to a natural setting (e.g. a forest, beach, mountain or lake) to restore your energies and rejuvenate yourself." You know, like a cabin in the woods or a small island community.

The first card the manager pulls out as a guess is the Queen of Hearts, which corresponds to the Queen of Cups. 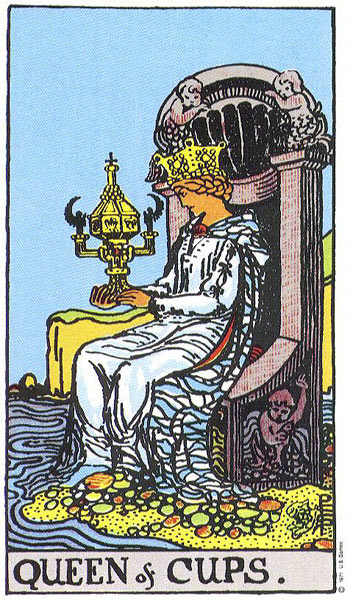 The Queen of Cups is "a good wife and a loving mother as she is emotionally secure and can connect on an emotional level with others," according to Biddy Tarot. There are none of those in The Ring, so again let's assume the card is reversed... thought it is worth noting first that the Queen of Cups is "the pure force of Water" with a powerful "connection with the subconscious." Samara is the one linked with water in The Ring, of course, appearing wet from her time in the well when she climbs out to kill you. But, in Ringu, it is Sadako's mother, Shizuko, who is linked with water. She used to just sit by the sea and stare at it, and it is implied that Sadako is the child of Shizuko and some sort of water spirit. Additionally, Shizuko (unlike either Samara's adoptive mother Anna or her biological mother Evelyn) has psychic powers (thus connected to the subconscious). This doesn't seem to be Rachel's card exclusively. 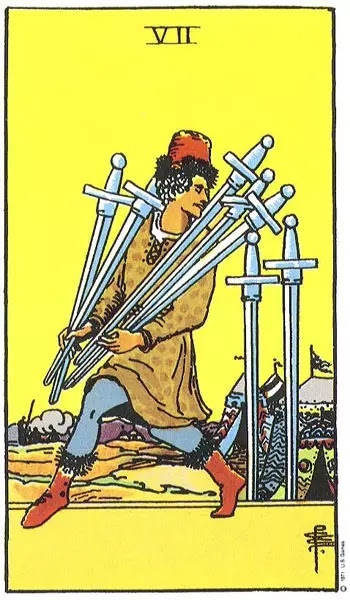 This card reminds me of Daniel Quinn's The Holy--the card's details figure quite specifically in the plot (which I won't spoil here), with a couple details that Biddy Tarot doesn't stress. Biddy Tarot says this is "a card of deception and betrayal... trying to 'get away with something' undetected and unnoticed." The image implies a guy preparing for something, gathering weapons together. But, also, he has forgotten two of them (this detail makes for an interesting twist in Quinn's book). What matters in regards to The Ring, though is this: "Sometimes, the Seven of Swords indicates a desire to go it alone. You want to discover, investigate and solve every problem using only your own wits and resources." Though Rachel turns to Noah early on, she doesn't really want him to watch the tape, and when it comes time to investigate out in the field, they split up... not unlike how they went when Rachel had Aidan, I suppose. Biddy Tarot warns: "You may end up feeling isolated and excluded, missing that great feeling of collaboration and synergy gained when you work with others. If you feel inclined to act alone, be sure this isolation will really work for you." Being a single mother--that isn't quite working for Rachel.