have you heard of the blair witch?

”Anybody worth their salt around here knows this area has been haunted by that old woman for years.” – Bob Griffin

The question then: who was the Blair Witch and what goes into her legend?

Let’s piece together the details:

1 Kedwards “banishment” was apparently done by wheelbarrow, as seen in this “eighteenth-century woodcut” (Stern, p. 110): 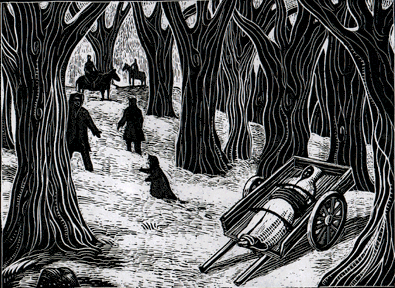 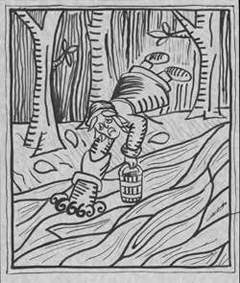 3 The description Heather in the film reads regarding the search party found at Coffin Rock:

They went into the woods prepared to find death, what they found was a desecration to humanity. At the site which trappers have often referred to as Coffin Rock. On top of the rock formation, the story of the torture inflicted upon these brave five men unfolded. Each was bound to the other. Each man’s hands bound to the next man’s feet, forming a solid structure out of the men. Blood at the edge of the hemp indicated that this act had been committed while each was alive and able-bodied enough to struggle. In the torso of each man the intestines had been torn out crudely. On each man's sun-bleached face was inscribed indecipherable writing cut into their flesh with an eerie precision. The men still entranced by the horror of what had happened, left the scene to tell the sheriff what had happened and did not sketch the writing and did not remove the bodies from the rock. Upon returning, vultures were seen at the rock, but upon inspection the bodies had been removed by persons unknown. The search party claimed that the stench of death was still thick. And whoever took the bodies had done so in a matter of hours.

4 Historian Bill Barnes, interviewed during the investigation into the disappearance of the three film students, recounts an incident involving both Rustin Parr and Robin Weaver:

…there is one thing, I remember… right in the middle of the war… and we were talking about how we should send someone who was really good at killing to take care of the Germans. And somebody—I think it might have been Luther Cravens… said, “we should send them Rustin Parr.” … Well, then I said Rustin Parr wouldn’t do no killing without those voices to guide him. And Miss Weaver—Robin Weaver—she walks by just at that moment, and she says, “Yeah, Jesus. Send the voices. I know those voices. Send them the voices.” (Stern, p. 120) In reality, of course, all of this came from the minds of Daniel Myrick and Eduardo Sanchez, directors and writers of the film. Numerous sources, including Powell (2001/2002), call the Blair Witch “a fictional and more blood-thirsty version of the Tennessee folklore’s Bell Witch” (p. 139).

Which brings to mind a couple things: 1) is this author deliberately implying that there are nonfictional Witches in the vein of either of these stories, or that the Bell Witch is somehow less fictional simply because… it’s an older story, I guess? 2) I really don’t see the similarities between the Bell Witch and the Blair Witch.

Hudson and McCarter (1978), for example, describe the Bell Witch as something more akin to a poltergeist, knocking the kids out of bed and taking off “every stitch of the[ir] bedclothes” (p. 134). The Bell Witch’s actions ranged from tangling Mary Bell’s hair to sitting on her and sucking out her breath while she slept. 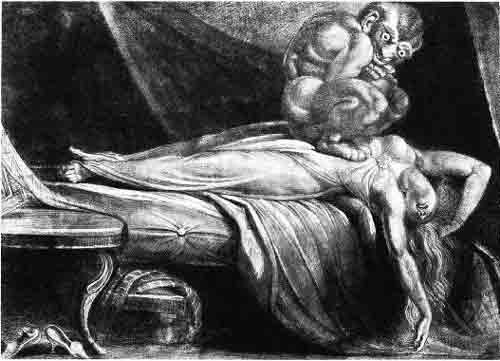 The story would be more befitting a poltergeist instead of a ghost if not for the eventual death that resulted. The Bell Witch story is supposedly …. The most famous ghost story—immortalized recently in the movie An American Haunting—but it plays in Hudson and McCarter’s version more like a fable, referring to the Bell’s neighbor “Old Andy Jackson, who had knocked off from being president” and ending with a great black bird with a bell around its neck showing up for Mary Bell’s funeral.

The bad historic detail here is that, for contrast, Smyth (1992) names the eldest daughter (Mary, above) as “Elizabeth ‘Betsy’ Bell. Smyth’s version, though, has more detail, including the “Witch” having a voice and producing foul odors.

John Bell was a prosperous cotton plantation owner, well-liked and respected by his neighbors and friends, who included General Andrew Jackson, later seventh president and a witness to the Witch’s activities…

As Jackson drove up to the house, the wagon suddenly ground to a halt, despite the enormous efforts of driver and horses, straining at the traces. Unable to find any natural stoppage, the General cried, “By the eternal boys! It is the Witch!” At this point a sharp, metallic voice—apparently coming from the nearby bushes—said: “All right, General, let the wagon move.” And the wagon started to roll forward once again towards the Bell house. (Smyth, 1992, p. 1310-1311)

—and sure enough, according to Jackson biographer Meacham (2008), Jackson did know a John Bell in Tennessee; Bell was a congressman, not just a “prosperous cotton plantation owner.” Plus, the Bell Witch haunting took place from 1817 to 1821, well before Jackson was president. Meacham makes no mention of Jackson being involved with the Witch at all, of course.

Tomorrow, maybe finally, the more general concept of the found footage film. Seven days is hardly enough time to deal with a film fully… but a year per film, like with Groundhog Day—well, there are far too many films unless I happen to live forever. And, we stopped making films.