a million bucks shy of being a millionaire

Neal is in marketing. Opening scene, waiting for boss or client to pick a cosmetics as layout. Staring at the options for hours then putting off the decision until after the holidays. This is important.

He barely makes it to the airport because he has to fight for a cab, first by chasing after one (versus Kevin Bacon), then paying a guy to give one up. This is important.

The lawyer Neal pays to get that cab says he has “no good nature.” This is also important.

Neal’s daughter knows his news is a flight delay. This is also important.

Neal’s run for the cabs, his run to the gate at the airport, the delay of said flight and his daughter knowing it—the entire setup for his disrupted trip home—this is all painting a picture of an American businessman whose life is constantly on the go. He works in a business built around selling products, a business dealing in appearances and first impressions. Neal has a wife, 2.5 kids (though, no white picket fence). He works in a business the really came of age in America—see any episode of Mad Men for reference.

(Nice touch, Neal noticing the shower curtain rings when he showers at the Braidwood Inn in Wichita. He’s already annoyed a bit by Del but here he is appreciating what Del does for a living, selling those rings.)

This movie is specifically American, not just because it’s framed around the approach of Thanksgiving but because it is built around two men used to being on the road, existing in a capitalist system where traveling salesman and advertising guys are business staples. It’s also—as Maolsheachlann mentioned in a comment on yesterday‘s entry—a very 1980s film; he says, “it has a very eighties feel even for an eighties movie, in the sense that it’s so streamlined, composed of a series of set-piece scenes, and trades in stereotypes.” From the musical cues to the characterization of supporting roles like Gus’ son Owen (the guy who gives them a ride to the train station)—brings his wife and kids along, has a gun rack in his pickup, etc. The film, positioned where it is in the late 80s (1987), I’m tempted to get into something even bigger than just “eighties” film...

I’m hesitant because just today—and I wish I could remember in what context it was, specifically—I read this bit about giving... I think it was grad students a bunch of knives, they will want to cut something. The point was that, if it was grad students, you give us a bunch of theory to explain everything in life in a little too much detail and all we want to do is apply it. There’s plenty in Planes, Trains & Automobiles that would fit into a discussion about Expectancy Violations Theory for example. But, I don’t really want to get into a communication theory. I think there’s an opening with Planes, Trains & Automobiles to get into talk about American hegemony. I think it’s notable—though I must admit that I think it is not deliberate but really structured as such for laughs—that so much of our internal American transportation infrastructure breaks down in this film. American hegemony was arguably already in decline by 1987, the Cold War was ending, and in this film we get the failure (sort of) of, well, planes, trains and automobiles (or at least singulars of each of those) as Neal and Del try to get to Chicago. 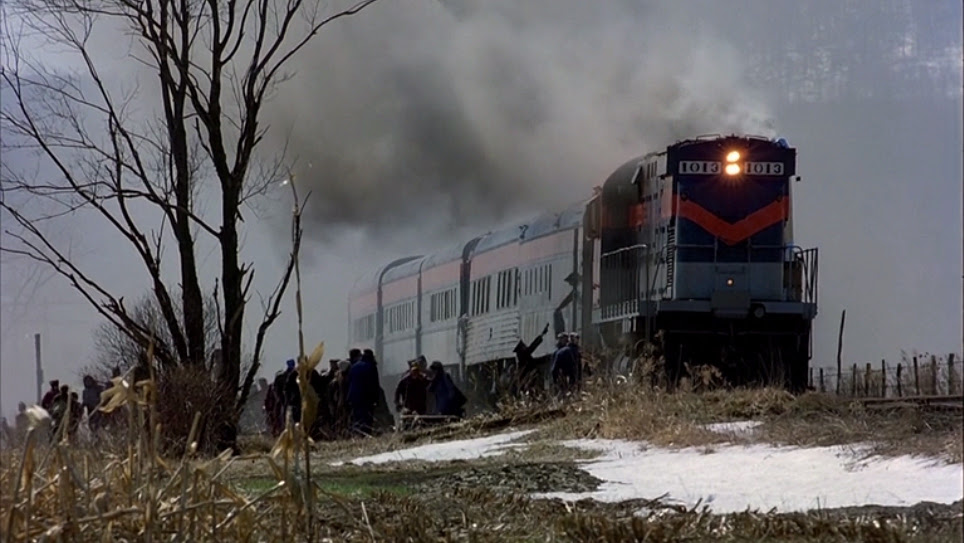 We Americans love our mobility—the careers of both Neal Page and Del Griffith depend on vehicular mobility. But, here, that mobility becomes unavailable. One could take that unavailability, that failure, as symbolic of a larger failure, the hegemonic decline perhaps. These two guys may be successful businessmen, but money just can’t buy everything anymore. 1980s affluence has come to an end.

I think that, when I get the chance to do a little research regarding this film in the next couple days, I will see if anyone has put together a longer piece on that topic.

Entries this week may be shorter than usual. I’ve got a lot of writing for school to do.

I’ve also got to get used to repeating a movie again.