can i be serious with you for a minute?

Let me just say, for the record, Groundhog Day has nothing to do with Thanksgiving. I mean, the usual (if you can call 2 or 3 times “usual”) thing is to come back to this movie and tie it in to whatever the month has been. The first batch of horror films, the romantic comedies, slasher films (though I had already explained how Groundhog Day was a slasher film. Now, Thanksgiving movies, except Thanksgiving movies are not about Thanksgiving. They are about a quest for family, a quest for a past that we know is better than the present. A movie about a holiday like Thanksgiving (or as we will see in the next month, Christmas)—

NEW THING ALERT: The movie already uses Mother-in-law’s tongue in the Tip Top Cafe... Mother-in-law’s Tongue is a plant. Anyway, the production already uses that plant in the Tip Top Cafe set, but as I was distracted from my mention of Christmas to just how Christmasy the decor in the Cherry Street Inn’s dining room was, I noticed something new. And, after somewhere around 400 screenings of this movie, not counting all the times I searched through it for certain moments and images, it is always an exciting thing to notice something new. It is not a huge thing about content this time, but still... 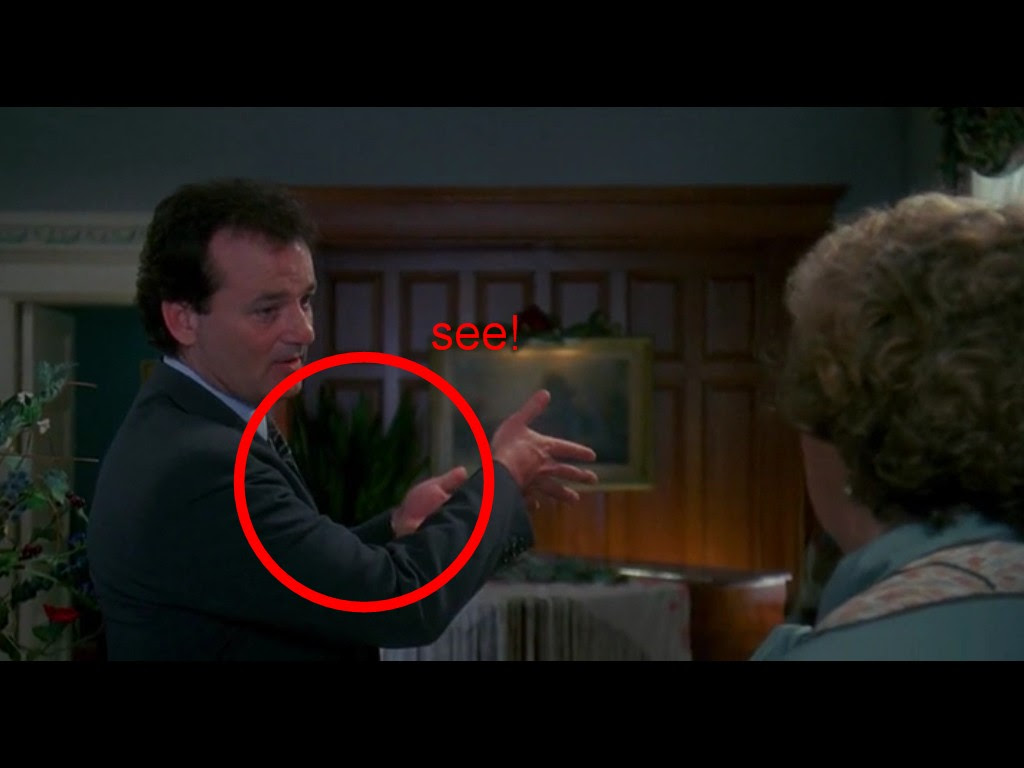 A movie about a holiday like Thanksgiving (or Christmas) is about family, is about society, about being a part of humanity. Thanksgiving movies focus in on the family aspect, but Christmas movies might expand a bit more into caring about your fellow man. Well, Planes, Trains & Automobiles and Dutch both deal in that realm, actually; 1) Neal is stuck in his own little bubble at the start of Planes, Trains & Automobiles but has to emerge from it to not only depend on Del, but to ultimately care about Del. Del may be a specific person, but the implicit story here is about Neal learning to care about anyone at all outside of his bubble. Del is not the kind of guy Neal would normally deal with; he is a bit too working class, which brings me to 2) Dutch, in which Doyle is effectively forced into a place (the shelter) where he has no choice but to first notice and second care about his fellow man. Prior to this, anyone beneath his class would be beneath his attention. But, the journey home, with a strange surrogate father accompanying him brings him outside of his bubble. It is a little more arbitrary compared to Neal’s connection with Del, but it still does not come across particularly forced, and we want Doyle to be better, just like we want Neal to be better, just like we want Phil to be better when he is stuck in Punxsutawney. Essentially, Neal being stuck on the road with Del and Doyle being stuck on the road with Dutch and then specifically in that shelter serves the same purpose as Phil being stuck in Punxsutawney.

I argued a long while ago—so long ago, I am not sure if I can find the exact entry [edit: found it]—that, really, Phil Connors was not stuck... Actually, I think I used the word trapped. Phil Connors was not trapped in Punxsutawney, he was trapped in Pittsburgh. That was the place where he was stuck in his day-to-day routine, doing the weather reports and not appreciating the effect he can have on other people’s lives, hitting on (and presumably sleeping with) all the interns at the station—though, to be fair, the dialogue establishing this detail did not make it to the final film—and having nothing meaningful in his life. Pittsburgh was the place where he had assumed a role—sarcastic weatherman by day, ladies’ man by night—and had nothing to show for it. There is a reason there is light in his eyes when he first sees Rita, standing there in front of the blue screen, and it is not because he has fallen in love with her... yet. It is because, in her he can see a sense of wonder that he has left behind and replaced with cynicism.

It occurs to me, actually, that that may have been a bit of the reason I was attracted to one of my fellow grad students last year (and I will spare you a link back to when I wrote about that before, this time)—because being a bit younger than I am, she was not as jaded about life even though she had just enough cynicism to be snarky and sarcastic about the state of things in the world. Hell, it is no surprise to me that anyone is attracted to younger potential partners from time to time, for the same reason we can appreciate the journey home to spend with family and almost be a kid again. It is not just rose-colored glasses; life was better before. Facts are irrelevant to this point. Life is not built on facts but feelings. And, it is like a drug; once upon a time, it was amazing, everything was new, everything was bright and we just did not know enough about the world to realize that so many corners of it were awful places. And, we keep wanting to find that feeling again. Maybe we use literal drugs, maybe we find relationships to have, kids, jobs, hobbies... Life is a constant effort to go backward by going forward.

Don’t get me wrong. I am not saying that we will forever fail at this effort. I think that there are plenty of moments where we achieve something great, some awesome feeling that demonstrates the why of life. Why do we do all of this? Because of that first kiss, because of that first time our child smiles at us, because of the applause, the good grade, that amazing pizza, that quiet reality-blurring moment on the beach, that perfect blissful moment in a field, the fun of a roller coaster, the joy of belting out a song like we really do not care who hears us, a good movie, an enthralling tv show, a transcendent book, or a remarkably mundane one, a hug from a loved one, a compliment from a stranger, the pride of our parents, a plan executed better than expected, a plane gone awry with hilarious results, ice cream, games, a nice drive... anything and everything. The right moment can lift us out of the forward or the backward to something... else. Time does not matter when the right moment comes along. Cynicism and hope both get set aside. The trap may still be present but we see it...

One of my novels ends with one of the main characters running through the woods. Tragedy has struck, her life is in upheaval, but she has this epiphany in which she sees what her life is, what it has been, what it can be. And, the point is not that her life will head down the best route in the future, or that it has even been going down a bad route so far, but that the routes are something she can see and evaluate and understand and appreciate, good or bad. Yesterday, I said, “Time is the enemy of familiarity and family,” but really, when life is going good, there is no enemy, not even time.

Which brings us right back around to Phil Connors, currently stealing a bag of money (yes, I am only 42 minutes into the movie with over 1300 words to this entry... apparently, Groundhog Day gets me in a rambling mood) because he has (he thinks) mastered time. He has yet to master himself, but that is a separate issue.

My point... or the point I was making before I rambled to a different point is, Groundhog Day is very much like Planes, Trains & Automobiles and Dutch and Pieces of April and Home for the Holidays in that it is built around community, belonging. Whether it is one’s biological family, one’s surrogate father, one’s apartment building neighbors, one’s travel buddy, or everyone in Punxsutawney—that sense of belonging is necessary, and when we do not feel it, we seek it. And, sometimes, like Neal, like Doyle, like Phil, we do not even realize that we want it until it forces itself upon us. I find myself returning to Paul Hannam’s (2008) The Magic of Groundhog Day and what he calls the Groundhog Day Effect: “the daily grind of endlessly repetitive tasks, mind-numbing encounters with the same people, and meaningless activities and conversations” (p. xix). You know, life. Plus ça change, plus c'est la même chose. The reason Planes, Trains & Automobiles works (I mean, aside from being entertaining and funny), and the reason Dutch works (despite some horrible details within) is that the main characters are not living their usual day-to-day. They are outside the norm. So, really, is April in Pieces of April. Outside the boundaries of the Groundhog Day Effect, and able to see life from a new angle, to find something in it and about it that is fresh and new. We do not quite get to see what April gets out of her Thanksgiving travails, but we can imagine. Similarly, we do not see quite where Claudia’s life will go, or just how well she has seen it for what it is, but at the end of Home for the Holidays we are left with a bit of hope. Leo says it well when Claudia asks what the point is: “Well, there is no point except, you know, if we get hit by a bus someday, at least we’ll know we had those two hours together.” The point is here and now. Those two hours, or Phil’s perfect day with Rita... the little moments that make all the rest worth it.

And, I finish this entry as Phil recites his speech to Rita as she sleeps. For a while, back when I first began this blog, this moment got to me more than it probably should have. It is a Hollywood construct, but it works. It is one of those moments. Manufactured but still somehow real. And, it does get to me.

Now, the rest of the movie. Like sitting down for a conversation with an old friend.