you got any amusing anecdotes?

A lot of classist undertones (and sometimes overtones) in Dutch. Right away, we’re introduced to Natalie (JoBeth Williams), who’s ex husband has money and she’s a little out of place at a high class shindig. Meanwhile, her new guy, the titular Dutch (Ed O’Neill) working-class clothes and literally gets locked out of the mansion first time we see him. O’Neill here, is already a few years into Married with Children, so he is the epitome of working class American. Challenged by Natalie’s ex, what does Dutch do? Threatens him with violence. In addition to the classist stuff, there’s a lot of masculine posturing going on as well.

Speaking of that ex, Reed (Christopher McDonald)—it’s amazing how by being a somewhat irresponsible asshole—not calling his son to let him know he won’t be available for Thanksgiving—he manipulates the situation so that Natalie has to break the bad news, making her the bad guy* while, minus a single phone call later in the film, Reed would be off with his new girlfriend/lover with none the wiser. It also is interesting how he assumes he can simply ask Dutch to step aside just so he (Reed) and Natalie can have a conversation. Early in my relationship with my ex, the first time I met my oldest daughter, her (my daughter’s) father rudely pushed past me and asked me to get out of his way so he could talk to his daughter. Funny thing was I actually had no idea who he was, had never seen a picture of him. Made for a nice first impression.

* In my public speaking class, we talk about inclusive and exclusive language. The use of “guy” here—I accept this one entirely, because the inherent sexism is just fine as long as, you know, men have been advantaged in virtually every human culture ever and definitely in the dominant cultures today. The idea that the bad person is innately and inherently male is just fine by me.

Meanwhile, we’re introduced to Doyle (Ethan Embry)—and one of the first rules of screenplay writing is don’t give major characters similar names, vary the sounds, but two stars, and both characters get D names**; go figure. Doyle’s introduction involves him referring to someone from a “decent” background being able to knock on the door before entering, then dressing down his schoolmate for only going to the prep school because his (the schoolmate’s) father works there. Not because he’s of the right class.

** Part of the D name thing is probably on purpose, of course. I mean, Dutch’s last name is Dooley, which is just an anagrammed version of Doyle (with an extra O, but that’s not important). Dutch and Doyle are two very different sides of a single coin—or so the film would have them be by the end, if they are not already. By film’s end, they’ll relate a bit better and be a little more similar.

Another threat of violence from Dutch, but not before Doyle gets some actual violence in. Then, add to the violence, some kidnapping, later some child endangerment. And, all played for laughs. This is really a 1980s movie in that respect. Political correctness had not really made its mark yet. 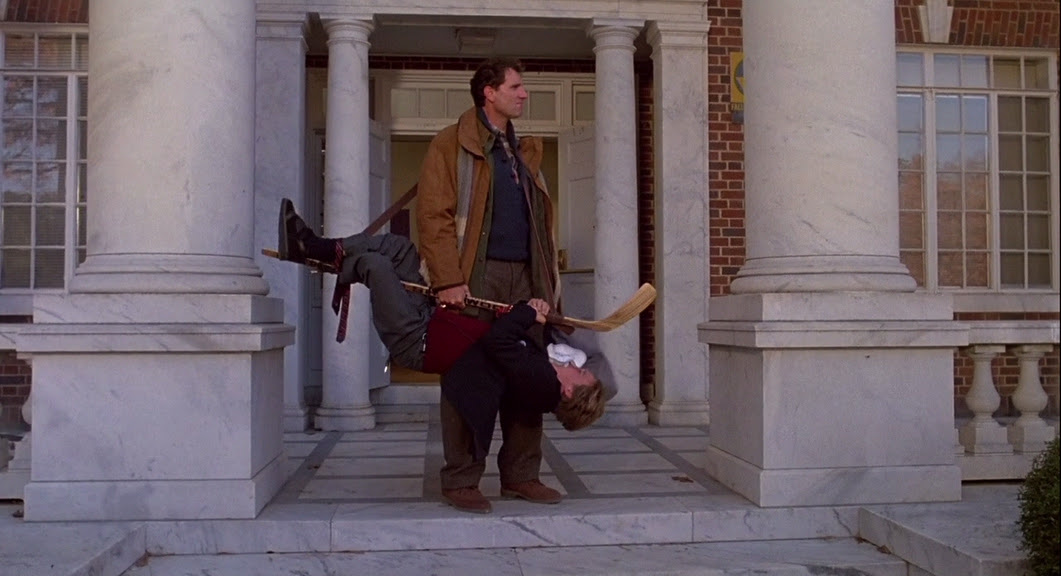 So, the question is, what do I think of Dutch? I saw it in the theater when was out in July of ‘91. I’d recently seen Terminator 2: Judgment Day, The Naked Gun 2 1/2: The Smell of Fear, Robin Hood: Prince of Thieves, City Slickers, The Rocketeer, Backdraft*** and Bill and Ted’s Bogus Journey in theaters.

*** Actually, it occurs to me that I saw Backdraft the night of prom (I was a Sophomore, but the Juniors roped us into serving), 26 May 1991, not really “recent” per the previous paragraph. My sister wanted to see Toy Soldiers again after I was done at prom, but I delayed just long enough to make that impossible. We saw Backdraft instead.

Thing is, this movie stuck with me. To be fair, a lot of movies stick with me. That’s why this blog works for me—movies have always been my thing. Dutch is not necessarily something special. I picked it for this month because it relates to Thanksgiving; I did not even realize it was in any way a John Hughes movie and so closely related to Planes, Trains & Automobiles when I picked it; that was just luck. There’s a certain charm to this film, like that other Hughes Thanksgiving film. This one is a little too purposeful when it pulls on your heartstrings, but the change in Doyle’s character plays a bit more realistically than Neal’s in Planes, Trains & Automobiles. Watch that train scene at the end of that film again. Steve Martin does a nice job with it, but really, those flashback bits of dialogue from Del don’t actually add up to my-wife’s-dead-and-I’m-lonely. A lot of that film’s detail is hidden between the setpieces we see, actually; Neal’s awesome rant about Del’s stories and how boring they are—at that point, we have not actually seen one of Del’s stories; we have barely even seen his anecdotes. In fact, other than the messy bathroom and his clearing of his sinuses, he’s been a fairly pleasant guy up to that point.

This film does not leave much between the scenes. We see the various steps along the way for Doyle. It does not all necessarily make perfect sense—the homeless shelter bit with the little girl trying to steal his roll is on right now and that’s a perfect example; he’s probably pretty hungry, and that girl has food. It’s a nice moment but it’s also a slightly forced moment. Still, it builds on what came before it and what comes after keeps on building. When Doyle runs past his father later so he can hug his mother, that is also a bit forced—while the film makes it clear why he may have accepted Dutch and rejected Reed, it does not necessarily make clear why he would suddenly run to his mother. He’s been blaming her for the divorce for a while now. Realistically, that relationship is going to take a little more time...

Okay, maybe he’s been secretly missing his mother for a while now. Maybe his attachment to her was something he had to deliberately hold in and the anger was the part her put on because he thought he should. It comes back to the class thing; Doyle trusted his father, and he could relate to his father more than he could relate to his mother. She’s not really the same class as her son, and he knows it. Hell, attending that prep school, he knows it all too well. But, now he’s moved past such division... as much as a kid can in a matter of days. I wonder if he even understands that, while his father may have money and an important job, he’s also the kind of guy who “knocks up” one of the country club waitresses. Not exactly classy.